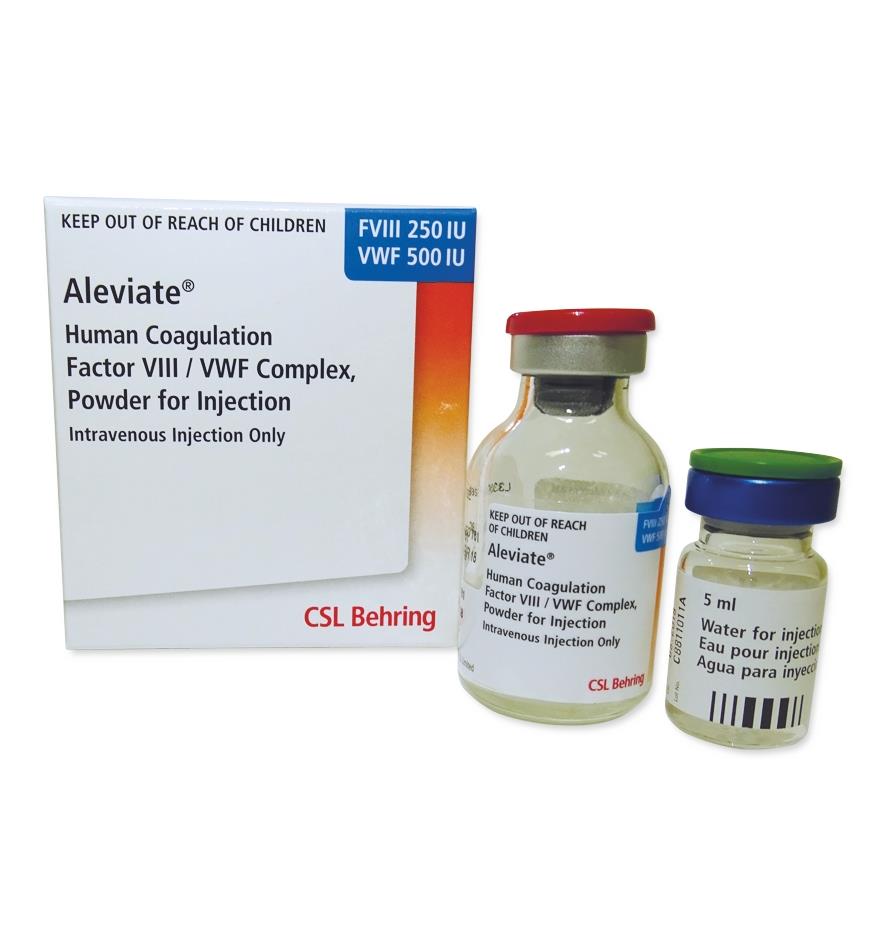 Concise Prescribing Info Full Prescribing Info Contents Description Action Indications/Uses Dosage/Direction for Use Overdosage Contraindications Special Precautions Use In Pregnancy & Lactation Adverse Reactions Drug Interactions Caution For Usage Storage MIMS Class ATC Classification Regulatory Classification Presentation/Packing
Full Prescribing Info
Contents
Human coagulation factor VIII, von Willebrand factor complex.
Description
Aleviate is a high purity, sterile, powder for injection containing a human coagulation factor VIII (FVIII) and human von Willebrand factor (VWF) complex. Aleviate is prepared from pooled human plasma. It is intended for IV administration. The factor VIII/VWF complex in Aleviate is purified from cryoprecipitate using selective precipitation and chromatography steps. The Aleviate manufacturing process includes solvent detergent (tributyl phosphate and polysorbate 80) and dry heat treatment (80°C for 72 hrs) steps to reduce the potential for viral transmission. The solvent detergent, dry heat treatment and partitioning steps used in the manufacture of Aleviate have been demonstrated to be effective virus inactivation/removal steps in vitro for the relevant viruses human immunodeficiency virus (HIV) and hepatitis A (HAV), and also with model viruses for hepatitis B (HBV) and hepatitis C viruses (HCV). The manufacturing process also contributes to the inactivation/removal of human parovirus B19 (B19).
Human albumin is added to FVIII:C Aleviate as a stabiliser. Measured prior to the addition of albumin, the specific activity of Aleviate is nominally 50 FVIII:C IU/mg of total protein. Aleviate contains other proteins eg, fibrinogen, fibronectin, immunoglobulins (IgA, IgM, IgG) and transforming growth factor β (TGF-β), all of which are present at significantly lower levels than in normal plasma. When expressed as per mg clottable protein (fibrinogen), the specific activity of the final product is nominally 300 IU VWF: RCo/mg and 150 IU FVIII:C/mg, based on the Aleviate VWF to FVIII ratio of 2:1.
Aleviate is available in 2 different presentations as detailed in Table 1. (See Table 1.)

Action
Pharmacology: The Aleviate FVIII/VWF complex consists of 2 different noncovalently bound proteins: FVIII and VWF. FVIII is an essential cofactor in activation of factor X leading ultimately to the formation of thrombin and fibrin. The activity of FVIII is measured as FVIII:C. VWF promotes platelet aggregation and platelet adhesion on damaged vascular endothelium; it also serves as a stabilising carrier protein for the procoagulant protein FVIII. The activity of VWF is measured as VWF:RCo.
Von Willebrand Disease (VWD) is an autosomally-inherited congenital bleeding disorder in which there is a deficiency or dysfunction of VWF. A reduction in VWF concentration in the bloodstream results in low FVIII activity and abnormal platelet function as the platelets are prevented from adhering to sub-endothelial tissue. As a result, excessive bleeding may occur.
The VWF:RCo activity in Aleviate exists in a 2:1 ratio with FVIII:C activity. Aleviate has been demonstrated to contain the high molecular weigh (HMW) multimers of VWF. HMW multimers are considered to be important for correcting the haemostatic defect in patients with VWD as they are important for platelet adhesion.
Haemophilia A is an X-linked recessive blood coagulation disorder. It is caused by reduced factor VIII activity through either insufficient or abnormal synthesis of the factor VIII protein. Factor VIII is a cofactor for factor IXa and accelerates the conversion of factor X to activated factor X. Activated factor X converts prothrombin into thrombin. Thrombin then converts fibrinogen into fibrin and a clot can be formed.
Pharmacokinetics: Clinical trials have been conducted with Biostate. Biostate is the tradename for the purified human coagulation factor VIII product manufactured by CSL for distribution in Australia. The process used for the manufacture of Biostate is the same as that is used for the manufacture of Aleviate.
The pharmacokinetics of Biostate has been studied in adult patients with VWD and haemophilia A, in separate trials.
The pharmacokinetics of FVIII and VWF in Biostate were measured in a single-blind, randomised, multicenter study of 12 patients 19-58 years with VWD in whom the response to desmopressin was inadequate or contraindicated. VWF:Ag, FVIII and HMW multimers were also measured in addition to the pharmacokinetic parameters for the 12 patients in Table 2 (see Table 2).
Two  (2) clinical trials investigated the pharmacokinetics of FVIII in Biostate in patients with haemophilia A. The 1st trial involved 16 male patients with severe haemophilia A (up to or equal to 2% FVIII) who each received a single dose of 50 IU FVIII/kg body weight. All patients had been previously treated with FVIII concentrates and were from 17-53 years. The pharmacokinetics data for the 16 patients is summarised in Table 2 (indicated by the term "initial").
To assess the potential for the development of inhibitors to factor VIII which may not be detected by conventional laboratory assays, a repeat pharmacokinetic trial was performed on 8 patients who participated in the 1st pharmacokinetic trial and continued treatment with Biostate for 3-6 months. There was no significant difference in the half-life or recovery determined in this trial compared to the 1st pharmacokinetic trial (see Table 2, indicated by the term "Repeat"), thus indicating no inhibitor development with the use of Biostate. (See Table 2.)

Clinical Trials: Von Willebrand Disease: The efficacy of Biostate in the control of non-surgical and surgical bleeding was assessed in an open-label, non-controlled trial in 23 patients (7 VWD Type 3). A 4-point rating scale was used: None: No control of bleeding. Moderate: Moderate control of bleeding, other treatment also required. Good: Slight oozing, partial but adequate control of bleeding. Excellent: Haemostasis achieved.
In 4 patients with 6 non-surgical bleeds, the haemostatic efficacy was rated over the first 3 days as excellent in 3 (50%), good in 1 (17%), moderate in 1 (17%) and nil in 1 (17%), the gastrointestinal haemorrhage improved in rating to good from day 4-7, but remained largely uncontrolled until corrected by a definitive endoscopic procedure). In 9 patients undergoing 10 major surgical procedures, the efficacy was excellent in 7 (70%) and good in 3 (30%). In 11 patients undergoing 15 minor surgical procedures, haemostatic efficacy was excellent in 14 (93%) an good in 1 (7%).
The mean Biostate dose to achieve haemostasis was 27 IU FVIII:C/kg/day for a median 2 days in non-surgical bleeding, 33 IU FVIII:C/kg/day for a median 2 days in minor surgery and 41 IU FVIII:C/kg/day for a median 7.5 days in major surgery.
In a retrospective review of Biostate in surgical bleeding in 43 patients undergoing 58 procedures, the haemostatic efficacy was excellent in 78% of procedures and good in 22%. Efficacy in the VWD Type 3 patients (n=5) was rated as excellent in 55%. The mean Biostate dose to achieve haemostasis was 29 IU FVIII:C/kg/day for a mean 2 days (range 1-4) in minor dental procedures and 5 days (range 1-13) in major surgery. There was some concomitant use of tranexamic acid and desmopressin.
The efficacy and safety of Biostate has not been established in acquired VWD.
Adverse reactions encountered during the clinical trials in VWD patients are outlined under Adverse reactions (see Adverse Reactions).
Haemophilia A: The safety, tolerability and efficacy of Biostate was studied in 30 male patients with severe haemophilia A, including the 16 patients who participated in the 1st pharmacokinetics trial. All patients had been previously treated with FVIII concentrates, were aged 16-62 years, and were treated with Biostate in this trial on an as required basis for 6 months. The 30 patients received a total of 1,416,550 IU of factor VIII (1,019 administrations) over the 6-month period, the total dose per person ranging from 6,000-112,250 IU. Out of the 789 administrations which were graded by the patients for efficacy, 131 (17%) were graded as excellent, 490 (62%) as good, 137 (17%) as moderate and 31 (4%) as poor. No patients undergoing surgery were included in this trial. Biostate was well tolerated by all patients. Inhibitor development was monitored during the trial using the Bethesda assay. Inhibitors were not detected in any of the 30 patients.
Adverse reactions encountered during the clinical trials in haemophilia A are outlined under Adverse Reactions.
Biostate has not been studied in previously untreated patients.
Indications/Uses
Treatment of bleeding episodes including surgical bleeding in patients with von Willebrand disease when desmopressin is ineffective or contraindicated. Treatment and prophylaxis of bleeding associated with factor VIII deficiency due to haemophilia A.
Dosage/Direction for Use
The dosage recommendations in Tables 3 (VWD) and 4 (Haemophilia A) are general guidelines for therapy. The exact loading and maintenance doses and dosing intervals should be based on the patient's clinical condition and response to therapy. Laboratory tests should be performed to ensure that the desired plasma factor VIII and VWF concentrations are achieved. (See Tables 3 and 4.)

View ADR Monitoring Form
Drug Interactions
The interaction of Aleviate with other drugs has not been established in specific studies.
Effect on Laboratory Tests: FVIII and/or VWF are endogenous plasma proteins; no specific effects on laboratory test are therefore anticipated.
Caution For Usage
Aleviate does not contain an antimicrobial preservative. It must, therefore, be used within 3 hrs after reconstitution. Any unused solution should be discarded appropriately. Use in 1 patient on 1 occasion only. If a clot or gel forms, do not use the product but return it to the distributor listed on the label.
Do not use after the expiry date.
Storage
Store at 2-8°C. Refrigerate. Do not freeze. Protect from light.
MIMS Class
Haemostatics
ATC Classification
B02BD02 - coagulation factor VIII ; Belongs to the class of blood coagulation factors. Used in the treatment of hemorrhage.