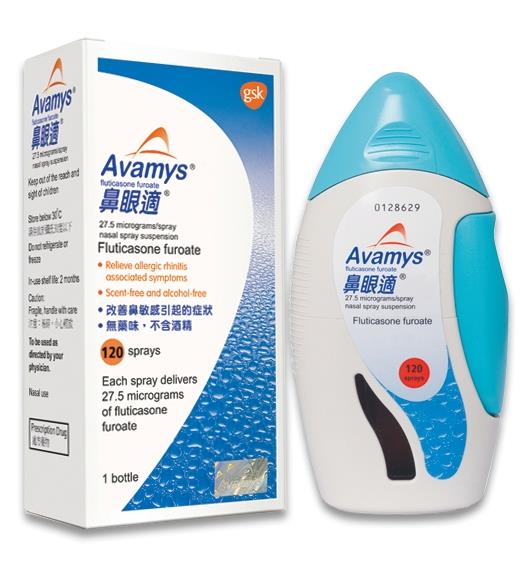 The distribution of the patients' perception of overall response to therapy (using a 7-point scale ranging from significantly improved to significantly worse) favoured AVAMYS Nasal Spray 110 micrograms over placebo, with a statistically significant treatment difference. Onset of action was experienced as early as eight hours after initial administration in two studies. Significant improvement in symptoms was observed in the first 24 hours in all four studies, and continued to improve over several days. The patients' quality of life (as assessed by the Rhinoconjunctivitis Quality of Life Questionnaire – RQLQ), was significantly improved from baseline with AVAMYS Nasal Spray compared to placebo (Minimum Important Difference in all studies = improvement of at least -0.5 over placebo; treatment difference -0.690, p<0.001, 95% CI -0.84, -0.54).
Adult and Adolescent Perennial Allergic Rhinitis: AVAMYS Nasal Spray 110 micrograms once daily resulted in a significant improvement in daily rTNSS (LS mean difference = -0.706, P=0.005, 95% CI -1.20, -0.21). The improvement in nasal symptoms was maintained over the full 24 hours after once daily administration. The distribution of patients' perception of overall response to therapy was also significantly improved compared to placebo.
In a two-year study designed to assess the ocular safety of fluticasone furoate (110 micrograms once daily intranasal spray), adults and adolescents with perennial allergic rhinitis received either fluticasone furoate (n=367) or placebo (n=181). The primary outcomes [time to increase in posterior subcapsular opacity (≥0.3 from baseline in Lens Opacities Classification System, Version III (LOCS III grade)) and time to increase in intraocular pressure (IOP; ≥7 mmHg from baseline)] were not statistically significant between the two groups. Increases in posterior subscapsular opacity (≥0.3 from baseline) were more frequent in subjects treated with fluticasone furoate 110 micrograms [14 (4%)] versus placebo [4 (2%)] and were transient in nature for ten subjects in the fluticasone furoate group and two subjects in the placebo group. Increases in IOP (≥7 mmHg from baseline) were more frequent in subjects treated with fluticasone furoate 110 micrograms: 7 (2%) for fluticasone furoate 110 micrograms once daily and 1 (<1%) for placebo. These events were transient in nature for six subjects in the fluticasone furoate group and one placebo subject. At weeks 52 and 104, 95% of subjects in both treatment groups had posterior subcapsular opacity values within ± 0.1 of baseline values for each eye and, at week 104, ≤1% of subjects in both treatment groups had ≥0.3 increase from baseline in posterior subcapsular opacity. At weeks 52 and 104, the majority of subjects (>95%) had IOP values of within ± 5mmHg of the baseline value. Increases in posterior subcapsular opacity or IOP were not accompanied by any adverse events of cataracts or glaucoma.
Children: The paediatric posology is based on assessment of the efficacy data across the allergic rhinitis population in children. In a seasonal allergic rhinitis study in children, AVAMYS Nasal Spray 110 micrograms over two weeks was effective on primary (daily rTNSS LS mean difference = -0.616, P=0.025, 95% CI -1.15, -0.08) and all secondary nasal endpoints, except the individual reflective score for rhinorrhea. No significant differences were observed between 55 micrograms AVAMYS Nasal Spray and placebo on any endpoint.
In a perennial allergic rhinitis study, AVAMYS Nasal Spray 55 micrograms was effective on daily rTNSS (LS mean difference = -0.754, P=0.003, 95% CI -1.24, -0.27). Although there was a trend towards improvement in rTNSS in 110 micrograms, this did not reach statistical significance (LS mean difference = -0.452, P=0.073, 95% CI -1.24, -0.04). Post-hoc analysis of efficacy data over 6 and 12 weeks from this study, and a 6 week HPA-axis safety study, each showed that the improvement in rTNSS for AVAMYS Nasal Spray 110 micrograms nasal spray over placebo was statistically significant.
A randomised, double-blind, parallel-group, multicenter, one-year placebo-controlled clinical growth study evaluated the effect of fluticasone furoate nasal spray 110 micrograms daily on growth velocity in 474 prepubescent children (5 to 7.5 years of age for girls and 5 to 8.5 years of age for boys) with stadiometry. Mean growth velocity over the 52-week treatment period was lower in the patients receiving fluticasone furoate (5.19 cm/year) compared to placebo (5.46 cm/year). The mean treatment difference was -0.27 cm per year [95% CI -0.48 to -0.06].
Toxicology: Pre-clinical Safety Data: Carcinogenesis, mutagenesis: There were no treatment-related increases in the incidence of tumours in two year inhalation studies in rats and mice.
AVAMYS Nasal Spray was not genotoxic in vitro or in vivo.
Reproductive Toxicology: The potential for reproductive toxicity was assessed in animals by inhalation administration to ensure high systemic exposure to fluticasone furoate. There were no effects on mating performance or fertility of male or female rats. In rats, developmental toxicity was confined to an increased incidence of incompletely ossified sternabrae in association with lower foetal weight. High doses in rabbits induced abortion. These findings are typical following systemic exposure to potent corticosteroids. There were no major skeletal or visceral abnormalities in either rats or rabbits, and no effect on pre- or post-natal development in rats.
Animal toxicology and/or pharmacology: Findings in general toxicology studies were similar to those observed with other glucocorticoids and are not considered to be clinically relevant to intranasal use of AVAMYS Nasal Spray.