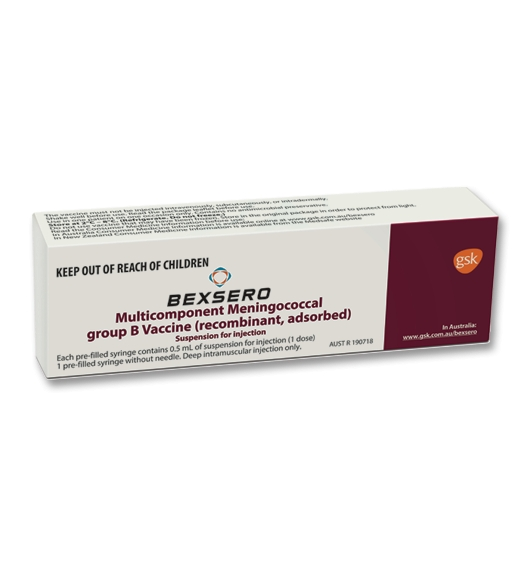 Concise Prescribing Info Full Prescribing Info Contents Description Action Indications/Uses Dosage/Direction for Use Overdosage Contraindications Special Precautions Use In Pregnancy & Lactation Adverse Reactions Drug Interactions Caution For Usage Storage MIMS Class ATC Classification Regulatory Classification Presentation/Packing
Full Prescribing Info
Contents
Meningococcal group B Vaccine (rDNA, component, adsorbed).
Description
One dose (0.5 ml) contains: Recombinant Neisseria meningitidis group B NHBA fusion protein 1, 2, 3 50 micrograms.
Recombinant Neisseria meningitidis group B NadA protein 1, 2, 3 50 micrograms.
Recombinant Neisseria meningitidis group B fHbp fusion protein 1, 2, 3 50 micrograms.
Outer membrane vesicles (OMV) from Neisseria meningitidis group B strain NZ98/254 measured as amount of total protein containing the PorA P1.4 2 25 micrograms.
1 produced in E. coli cells by recombinant DNA technology.
2 adsorbed on aluminium hydroxide (0.5 mg Al3+).
3 NHBA (Neisseria Heparin Binding Antigen), NadA (Neisserial adhesin A), fHbp (factor H binding protein).
Excipients/Inactive Ingredients: Sodium chloride, Histidine, Sucrose, Water for injections.
Action
Pharmacotherapeutic group: meningococcal vaccines. ATC code: J07AH09.
Pharmacology: Pharmacodynamics: Mechanism of action: Immunisation with Bexsero is intended to stimulate the production of bactericidal antibodies that recognize the vaccine antigens NHBA, NadA, fHbp, and PorA P1.4 (the immunodominant antigen present in the OMV component) and are expected to be protective against Invasive Meningococcal Disease (IMD). As these antigens are variably expressed by different strains, meningococci that express them at sufficient levels are susceptible to killing by vaccine-elicited antibodies. The Meningococcal Antigen Typing System (MATS) was developed to relate antigen profiles of different strains of meningococcal group B bacteria to killing of the strains in the serum bactericidal assay with human complement (hSBA). A survey of approximately 1,000 different invasive meningococcal group B isolates collected during 2007-2008 in 5 European countries showed that, depending on the country of origin, between 73% and 87% of meningococcal group B isolates had an appropriate MATS antigen profile to be covered by the vaccine. Overall, 78% (95% confidence limits from 63-90%) of the approximately 1,000 strains were potentially susceptible to vaccine-induced antibodies.
Clinical efficacy: The efficacy of Bexsero has not been evaluated through clinical trials. Vaccine efficacy has been inferred by demonstrating the induction of serum bactericidal antibody responses to each of the vaccine antigens (see Immunogenicity as follows).
Immunogenicity: Serum bactericidal antibody responses to each of the vaccine antigens NadA, fHbp, NHBA and PorA P1.4 was evaluated using a set of four meningococcal group B reference strains. Bactericidal antibodies against these strains were measured by the Serum Bactericidal Assay using human serum as the source of complement (hSBA). Data are not available from all vaccine schedules using the reference strain for NHBA.
Most of the primary immunogenicity studies were conducted as randomized, controlled, multicenter, clinical trials. Immunogenicity was evaluated in infants, children, adolescents and adults.
Immunogenicity in infants and children: In infant studies, participants received three doses of Bexsero either at 2, 4 and 6 or 2, 3 and 4 months of age and a booster dose in their second year of life, as early as 12 months of age. Sera were obtained both before vaccination, one month after the third vaccination (see Table 1) and one month after booster vaccination (see Table 2). In an extension study the persistence of the immune response was assessed one year after the booster dose (see Table 2). Previously unvaccinated children also received two doses in the second year of life, with antibody persistence being measured at one year after the second dose (see Table 3). The immunogenicity after two doses has been also documented in another study in infants 6 months to 8 months of age at enrolment (see Table 3).
A two-dose schedule followed by a booster has been evaluated in infants 3 months to 5 months of age in a clinical study.
Immunogenicity in infants 2 months to 5 months of age: Three-dose primary series followed by a booster: Immunogenicity results at one month after three doses of Bexsero administered at 2, 3, 4 and 2, 4, 6 months of age are summarised in Table 1. Bactericidal antibody responses one month after the third vaccination against meningococcal reference strains were high against the fHbp, NadA and PorA P1.4 antigens at both Bexsero vaccination schedules. The bactericidal responses against the NHBA antigen were also high in infants vaccinated at the 2, 4, 6-month schedule, but this antigen appeared to be less immunogenic at the 2, 3, 4-month schedule. The clinical consequences of the reduced immunogenicity of the NHBA antigen at this schedule are not known. (See Table 1.)

A decline in antibody titers to PorA P1.4 and fHbp antigens (reaching 9%-10% and 12%-20% of subjects with an hSBA ≥ 1:5, respectively) has been observed in an additional study in children 4 years of age who received a full priming and booster schedule as infants. In the same study the response to a further dose was indicative of immunological memory as 81%-95% of subjects reached an hSBA ≥ 1:5 to PorA P1.4 and 97%-100% to fHbp antigens following further vaccination. The clinical significance of this observation and the need for additional booster doses to maintain longer term protective immunity has not been established.
Two-dose primary series followed by a booster: The immunogenicity after two primary doses (at 3 and a half and 5 months of age) or three primary doses (at 2 and a half, 3 and a half and 5 months of age) of Bexsero followed by a booster dose in infants starting vaccination between 2 and 5 months of age has been evaluated in an additional phase 3 clinical study. The percentages of seropositive subjects (i.e. achieving an hSBA of at least 1:4) ranged from 44% to 100% one month after the second dose and from 55% to 100% one month after the third dose. At one month following a booster administered 6 months after the last dose, the percentages of seropositive subjects ranged from 87% to 100% for the two-dose schedule, and from 83% to 100% for the three-dose schedule.
Antibody persistence was evaluated in an extension study in children 3 to 4 years of age. Comparable percentages of subjects were seropositive at 2 to 3 years after being previously vaccinated with either two doses followed by a booster of Bexsero (ranging from 35% to 91%) or three doses followed by a booster (ranging from 36% to 84%). In the same study the response to an additional dose administered 2 to 3 years after the booster was indicative of immunological memory as shown by a robust antibody response against all Bexsero antigens, ranging from 81% to 100% and from 70% to 99%, respectively. These observations are consistent with adequate priming in infancy with both a two-dose and a three-dose primary series followed by a booster of Bexsero.
Immunogenicity in infants 6 to 11 months and children 12 to 23 months of age: The immunogenicity after two doses administered two months apart in children 6 months to 23 months of age has been documented in two studies whose results are summarised in Table 3. Against each of the vaccine antigens, seroresponse rates and hSBA GMTs were high and similar after the two-dose series in infants 6-8 months of age and children 13-15 months of age. Data on antibody persistence one year after the two doses at 13 and 15 months of age are also summarised in Table 3. (See Table 3.)

Immunogenicity in children 2 to 10 years of age: The immunogenicity after two doses of Bexsero administered either one or two months apart in children 2 to 10 years of age has been evaluated in two phase 3 clinical studies. In the first study, whose results are summarised in Table 4, participants received two doses of Bexsero two months apart. The seroresponse rates and hSBA GMTs were high after the two-dose schedule in children against each of the vaccine antigens (see Table 4).

In the adolescent study, bactericidal responses following two doses of Bexsero were stratified by baseline hSBA less than 1:4 or equal to or greater than 1:4. Seroresponse rates and percentages of subjects with at least a 4-fold increase in hSBA titer from baseline to one month after the second dose of Bexsero are summarised in Table 7. Following Bexsero vaccination, a high percentage of subjects were seropositive and achieved 4-fold increases in hSBA titers independent of pre-vaccination status. (See Table 7.)

Immunogenicity in special populations: Children and adolescents with complement deficiencies, asplenia, or splenic dysfunction: In a phase 3 clinical study, children and adolescents 2 through 17 years of age with complement deficiencies (40), with asplenia or splenic dysfunction (107), and age-matched healthy subjects (85) received two doses of Bexsero two months apart. At 1 month following the 2-dose vaccination course, the percentages of subjects with hSBA ≥1:5 in individuals with complement deficiencies and asplenia or splenic dysfunction were 87% and 97% for antigen fHbp, 95% and 100% for antigen NadA, 68% and 86% for antigen PorA P1.4, 73% and 94% for antigen NHBA, respectively, indicating an immune response in these immunocompromised subjects. The percentages of healthy subjects with hSBA ≥1:5 were 98% for antigen fHbp, 99% for antigen NadA, 83% for antigen PorA P1.4, and 99% for antigen NHBA.
The European Medicines Agency has deferred the obligation to submit the results of studies with Bexsero in one or more subsets of the paediatric population in the prevention of meningococcal disease caused by Neisseria meningitidis group B (see Dosage & Administration for information on paediatric use).
Pharmacokinetics: Not applicable.
Toxicology: Preclinical safety data: Non-clinical data reveal no special hazard for humans based on repeated dose toxicity and reproductive and developmental toxicity studies.
Indications/Uses
Bexsero is indicated for active immunisation of individuals from 2 months of age and older against invasive meningococcal disease caused by Neisseria meningitidis group B. The impact of invasive disease in different age groups as well as the variability of antigen epidemiology for group B strains in different geographical areas should be considered when vaccinating. See Pharmacology: Pharmacodynamics under Actions for information on protection against specific group B strains. The use of this vaccine should be in accordance with official recommendations.
Dosage/Direction for Use
Posology: See Table 9.