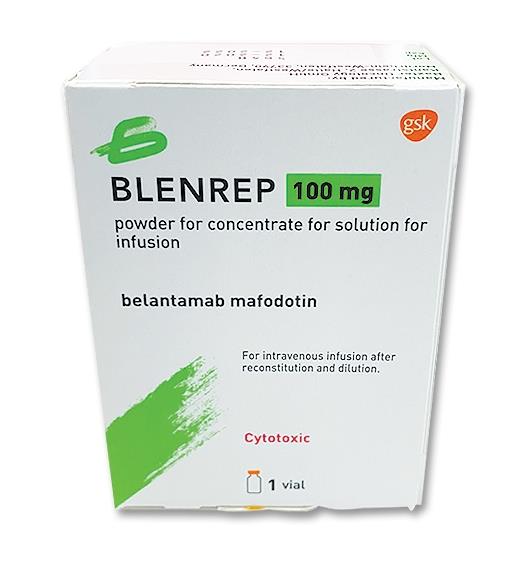 Concise Prescribing Info Full Prescribing Info Contents Description Action Indications/Uses Dosage/Direction for Use Overdosage Contraindications Special Precautions Use In Pregnancy & Lactation Adverse Reactions Drug Interactions Caution For Usage Storage MIMS Class ATC Classification Regulatory Classification Presentation/Packing
The information highlighted (if any) are the most recent updates for this brand.
Full Prescribing Info
Action
Pharmacotherapeutic group: antineoplastic agents, monoclonal antibodies. ATC code: L01XC39.
Pharmacology: Pharmacodynamics: Mechanism of action: Belantamab mafodotin is a humanised IgG1κ monoclonal antibody conjugated with a cytotoxic agent, maleimidocaproyl monomethyl auristatin F (mcMMAF). Belantamab mafodotin binds to cell surface BCMA and is rapidly internalised. Once inside the tumour cell, the cytotoxic agent is released disrupting the microtubule network, leading to cell cycle arrest and apoptosis. The antibody enhances recruitment and activation of immune effector cells, killing tumour cells by antibody-dependent cellular cytotoxicity and phagocytosis. Apoptosis induced by belantamab mafodotin is accompanied by markers of immunogenic cell death, which may contribute to an adaptive immune response to tumour cells.
Pharmacodynamic effects: Cardiac Electrophysiology: Based on exposure-QTc analysis, belantamab mafodotin had no meaningful QTc prolongation (>10 ms) at the recommended dose of 2.5 mg/kg once every 3 weeks.
Immunogenicity: In clinical studies in patients with multiple myeloma, <1% of patients (2/274) tested positive for anti-belantamab mafodotin antibodies after receiving belantamab mafodotin. One of the two patients tested positive for neutralising anti-belantamab mafodotin antibodies.
Clinical efficacy: Study 205678 was an open-label, two arm, Phase II, multicentre study which evaluated belantamab mafodotin as monotherapy in patients with multiple myeloma who had relapsed following treatment with at least 3 prior therapies, and who were refractory to an immunomodulatory agent, a proteasome inhibitor and an anti-CD38 antibody alone or in combination. Patients were included if they had undergone autologous stem cell transplant or were considered transplant ineligible and had measurable disease by International Myeloma Working Group (IMWG) criteria.
Patients were randomised to receive 2.5 mg/kg (N=97) or 3.4 mg/kg (N=99) belantamab mafodotin by intravenous infusion every 3 weeks until disease progression or unacceptable toxicity (see Table 1). The data presented as follows is from the 2.5 mg/kg cohort who received the recommended therapeutic dose based on overall benefit risk assessment (see Dosage & Administration). (See Table 1.)

The primary endpoint was overall response rate as evaluated by an Independent Review Committee (IRC) based on the IMWG Uniform Response Criteria for Multiple Myeloma. Table 2 provides the results of study 205678. (See Table 2.)

Paediatric population: The European Medicines Agency has waived the obligation to submit the results of studies with BLENREP in all subsets of the paediatric population in multiple myeloma (see Dosage & Administration for information on paediatric use).
This medicinal product has been authorised under a so-called 'conditional approval' scheme. This means that further evidence on this medicinal product is awaited.
The European Medicines Agency will review new information on this medicinal product at least every year and this SmPC will be updated as necessary.
Pharmacokinetics: Absorption: Maximum concentration for belantamab mafodotin occurred at or shortly after the end of infusion while cys-mcMMAF concentrations peaked ~24 hours after dosing. Geometric mean belantamab mafodotin Cmax and AUC(0-tau) concentrations were 43 mcg/mL and 4,666 mcg·h/mL, respectively. Geometric mean cys-mcMMAF Cmax and AUC(0-168h) concentrations were 0.90 ng/mL and 84 ng·h/mL, respectively.
Distribution: The mean steady-state volume of distribution of belantamab mafodotin was 10.8 L.
Biotransformation: The monoclonal antibody portion of belantamab mafodotin is expected to undergo proteolysis to small peptides and individual amino acids by ubiquitous proteolytic enzymes. Cys-mcMMAF had limited metabolic clearance in human hepatic S9 fraction incubation studies.
Drug interactions: In vitro studies demonstrated that cys-mcMMAF is a substrate of organic anion transporting polypeptide (OATP)1B1 and OATP1B3, multidrug resistance-associated protein (MRP)1, MRP2, MRP3, bile salt export pump (BSEP), and a possible substrate of P-glycoprotein (P-gp).
Elimination: Belantamab mafodotin was cleared slowly with total plasma clearance of 0.92 L/day and a terminal phase half-life of 12 days. Over time, clearance was reduced by 28% to 0.67 L/day with an elimination half-life of 14 days. Predose cys-mcMMAF concentrations at each dose were typically below the limit of quantification (0.05 ng/mL).
In an animal study, approximately 83% of the radioactive dose of cys-mcMMAF was excreted in the faeces; urinary excretion (approximately 13%) was a minor route; intact cys-mcMMAF was detected in human urine, with no evidence of other MMAF-related metabolites.
Linearity/non-linearity: Belantamab mafodotin exhibits dose-proportional pharmacokinetics over the recommended dose range with a reduction in clearance over time.
Special populations: Elderly patients (≥65 years old): No formal studies have been conducted in elderly patients. Age was not a significant covariate in population pharmacokinetic analyses.
Renal impairment: No formal studies have been conducted in patients with renal impairment. Renal function was not a significant covariate in population pharmacokinetic analyses that included patients with normal renal function and mild or moderate renal impairment.
Hepatic impairment: No formal studies have been conducted in patients with hepatic impairment. Hepatic function was not a significant covariate in population pharmacokinetic analyses that included patients with normal hepatic function or mild hepatic impairment.
Body weight: Body weight was a significant covariate in population pharmacokinetic analyses. Belantamab mafodotin Ctau was predicted to be +10% at a body weight of 100 kg (+20% for 130 kg) and -10% at a body weight of 55 kg (-20% for 40 kg) compared to the typical patient (75 kg).
Toxicology: Preclinical safety data: Animal toxicology and/or pharmacology: In non-clinical studies, the principal adverse findings (directly related to belantamab mafodotin) in the rat and monkey, at exposures ≥1.2 times of the recommended clinical dose of 2.5 mg/kg, were elevated liver enzymes sometimes associated with hepatocellular necrosis at ≥10 and ≥3 mg/kg, respectively, and increases in alveolar macrophages associated with eosinophilic material in the lungs at ≥3 mg/kg (rat only). Most findings in animals were related to the cytotoxic drug conjugate, the histopathological changes observed in the testes and lungs, were not reversible in rats.
Single cell necrosis in the corneal epithelium and/or increased mitoses of corneal epithelial cells was observed in rat and rabbit. Belantamab mafodotin was taken up into cells throughout the body by a mechanism unrelated to BCMA receptor expression on the cell membrane.
Carcinogenesis/mutagenesis: Belantamab mafodotin was genotoxic in an in vitro screening assay in human lymphocytes, consistent with the pharmacological effect of cys-mcMMAF-mediated disruption of microtubules causing aneuploidy.
No carcinogenicity or definitive genotoxicity studies have been conducted with belantamab mafodotin.
Reproductive Toxicology: No animal studies have been performed to evaluate the potential effects of belantamab mafodotin on reproduction or development. The mechanism of action is to kill rapidly dividing cells which would affect a developing embryo which has rapidly dividing cells. There is also a potential risk of heritable changes via aneuploidy in female germ cells.
Effects on male and female reproductive organs have been observed in animals at doses of ≥10 mg/kg, which is approximately 4 times the exposure of the clinical dose. Luteinized nonovulatory follicles were seen in the ovaries of rats after 3 weekly doses. Findings in male reproductive organs, that were adverse and progressed following repeat dosing in rat, included marked degeneration/atrophy of seminiferous tubules that generally did not reverse following dosing cessation.