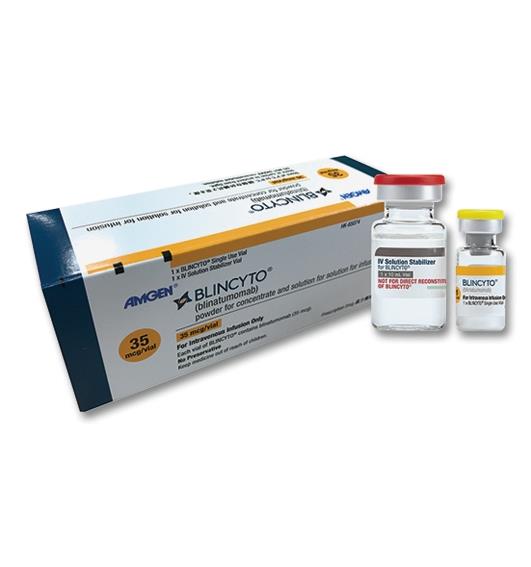 Postmarketing Experience: The following adverse reactions have been identified during postapproval use of BLINCYTO. Because these reactions are reported voluntarily from a population of uncertain size, it is not always possible to reliably estimate their frequency or establish a causal relationship to drug exposure.
Fatal pancreatitis, has been reported in patients receiving BLINCYTO in combination with dexamethasone (see Precautions).
Immunogenicity: As with all therapeutic proteins, there is potential for immunogenicity. The immunogenicity of BLINCYTO has been evaluated using either an electrochemiluminescence detection technology (ECL) or an enzyme-linked immunosorbent assay (ELISA) screening immunoassay for the detection of binding anti-blinatumomab antibodies. For patients whose sera tested positive in the screening immunoassay, an in vitro biological assay was performed to detect neutralizing antibodies.
In clinical studies, less than 1% of patients treated with BLINCYTO tested positive for binding anti-blinatumomab antibodies. All patients who tested positive for binding antibodies also tested positive for neutralizing anti-blinatumomab antibodies. Anti-blinatumomab antibody formation may affect pharmacokinetics of BLINCYTO.
The detection of anti-blinatumomab antibody formation is highly dependent on the sensitivity and specificity of the assay. Additionally, the observed incidence of antibody (including neutralizing antibody) positivity in an assay may be influenced by several factors, including assay methodology, sample handling, timing of sample collection, concomitant medications, and underlying disease. For these reasons, comparison of the incidence of antibodies to blinatumomab with the incidence of antibodies to other products may be misleading.
View ADR Monitoring Form