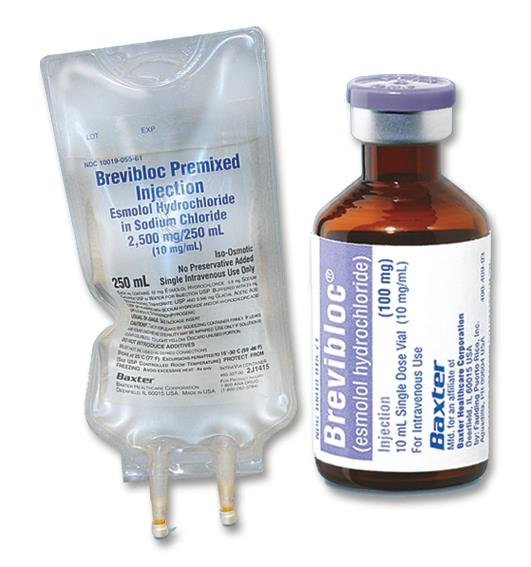 Clinical Trial Adverse Reactions (Frequency <3%): Psychiatric Disorders: Confusional state and agitation (~2%); anxiety, depression and abnormal thinking (<1%).
Nervous System Disorders: Headache (~2%); paresthesia, syncope, speech disorder, and lightheadedness (<1%); convulsions (<1%), with one death.
Vascular Disorders: Peripheral ischemia (~1%); pallor and flushing (<1%).
Gastrointestinal Disorders: Vomiting (~1%); dyspepsia, constipation, dry mouth, and abdominal discomfort (<1%).
Renal and Urinary Disorders: Urinary retention (<1%).
Post-Marketing Experience: In addition to the adverse reactions reported in clinical trials, the following adverse reactions have been reported in the post-marketing experience. Because these reactions are reported voluntarily from a population of uncertain size, it is not always possible to estimate reliably their frequency or to establish a causal relationship to drug exposure.
Cardiac Disorders: Cardiac arrest, coronary arteriospasm.
Skin and Subcutaneous Tissue Disorders: Angioedema, urticaria, psoriasis.
View ADR Monitoring Form
Drug Interactions
Concomitant use of BREVIBLOC injection with other drugs that can lower blood pressure, reduce myocardial contractility, or interfere with sinus node function or electrical impulse propagation in the myocardium can exaggerate BREVIBLOC's effects on blood pressure, contractility, and impulse propagation. Severe interactions with such drugs can result in, for example, severe hypotension, cardiac failure, severe bradycardia, sinus pause, sinoatrial block, atrioventricular block, and/or cardiac arrest. In addition, with some drugs, beta blockade may precipitate increased withdrawal effects. (See clonidine, guanfacine, and moxonidine as follows.) BREVIBLOC should therefore be used only after careful individual assessment of the risks and expected benefits in patients receiving drugs that can cause these types of pharmacodynamic interactions, including but not limited to: Digitalis glycosides: Concomitant administration of digoxin and BREVIBLOC leads to an approximate 10% to 20% increase of digoxin blood levels at some time points. Digoxin does not affect BREVIBLOC pharmacokinetics. Both digoxin and beta blockers slow atrioventricular conduction and decrease heart rate. Concomitant use increases the risk of bradycardia.
Anticholinesterases: BREVIBLOC prolonged the duration of succinylcholine-induced neuromuscular blockade and moderately prolonged clinical duration and recovery index of mivacurium.
Antihypertensive agents clonidine, guanfacine, or moxonidine: Beta blockers also increase the risk of clonidine-, guanfacine-, or moxonidine-withdrawal rebound hypertension. If, during concomitant use of a beta blocker, antihypertensive therapy needs to be interrupted or discontinued, discontinue the beta blocker first, and the discontinuation should be gradual.
Calcium channel antagonists: In patients with depressed myocardial function, use of BREVIBLOC with cardiodepressant calcium channel antagonists (e.g., verapamil) can lead to fatal cardiac arrests.
Sympathomimetic drugs: Sympathomimetic drugs having beta-adrenergic agonist activity will counteract effects of BREVIBLOC.
Vasoconstrictive and positive inotropic agents: Because of the risk of reducing cardiac contractility in presence of high systemic vascular resistance, do not use BREVIBLOC to control tachycardia in patients receiving drugs that are vasoconstrictive and have positive inotropic effects, such as epinephrine, norepinephrine, and dopamine.
Caution For Usage
Each bag contains no preservative. Once drug has been withdrawn from ready-to-use bag, the bag should be used within 24 hours, with any unused portion discarded.
Do not use plastic containers in series connections. Such use could result in an embolism due to residual air being drawn from the primary container before administration of the fluid from the secondary container is completed.
Do not remove unit from overwrap until ready to use. Do not use if overwrap has been previously opened or damaged. The overwrap is a moisture barrier. The inner bag maintains sterility of the solution. Tear overwrap at notch and remove premixed bag. Some opacity of the plastic due to moisture absorption during the sterilization process may be observed. This is normal and does not affect the solution quality or safety. The opacity will diminish gradually.
Check for minute leaks by squeezing the inner bag firmly. If leaks are found, discard solution, as sterility may be impaired. Do not use unless the solution is clear (colorless to light yellow) and the seal is intact.
Preparation for intravenous administration: Use aseptic technique.
Suspend premixed bag from eyelet support.
Remove plastic protector from delivery port at bottom of bag.
Attach administration set.
Refer to complete directions accompanying set.
Storage
Store at 25°C (77°F). Excursions permitted to 15°-30°C (59°-86°F) [see USP Controlled Room Temperature]. Protect from freezing. Avoid excessive heat.
Patient Counseling Information
Physicians should inform patients of the risks associated with BREVIBLOC injection: The most common adverse reactions are symptomatic hypotension (hyperhidrosis, dizziness) and asymptomatic hypotension.
MIMS Class
Beta-Blockers
ATC Classification
C07AB09 - esmolol ; Belongs to the class of selective beta-blocking agents. Used in the treatment of cardiovascular diseases.