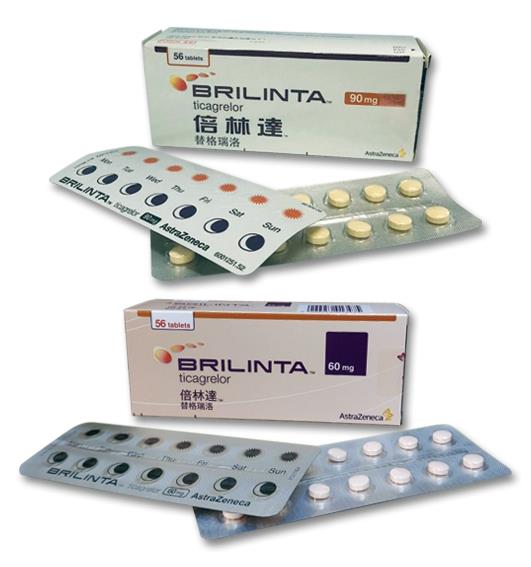 Concise Prescribing Info Full Prescribing Info Contents Description Action Indications/Uses Dosage/Direction for Use Overdosage Contraindications Special Precautions Use In Pregnancy & Lactation Adverse Reactions Drug Interactions Caution For Usage MIMS Class ATC Classification Regulatory Classification Presentation/Packing
The information highlighted (if any) are the most recent updates for this brand.
Full Prescribing Info
Special Precautions
Bleeding risk: The use of Brilinta in patients at known increased risk for bleeding should be balanced against the benefit in terms of prevention of atherothrombotic events (see Adverse Reactions and Pharmacology: Pharmacodynamics under Actions). If clinically indicated, Brilinta should be used with caution in the following patient groups: Patients with a propensity to bleed (e.g. due to recent trauma, recent surgery, coagulation disorders, active or recent gastrointestinal bleeding). The use of ticagrelor is contraindicated in patients with active pathological bleeding, in those with a history of intracranial haemorrhage, and in patients with severe hepatic impairment (see Contraindications).
Patients with concomitant administration of medicinal products that may increase the risk of bleeding (e.g. non-steroidal anti-inflammatory drugs (NSAIDs), oral anticoagulants and/or fibrinolytics) within 24 hours of ticagrelor dosing.
No data exist with ticagrelor regarding a haemostatic benefit of platelet transfusions; circulating Brilinta may inhibit transfused platelets. Since co-administration of ticagrelor with desmopressin did not decrease template-bleeding time, desmopressin is unlikely to be effective in managing clinical bleeding events (see Interactions).
Antifibrinolytic therapy (aminocaproic acid or tranexamic acid) and/or recombinant factor VIIa may increase haemostasis. Ticagrelor may be resumed after the cause of bleeding has been identified and controlled.
Surgery: Patients should be advised to inform physicians and dentists that they are taking ticagrelor before any surgery is scheduled and before any new medicinal product is taken.
In PLATO patients undergoing coronary artery bypass grafting (CABG), ticagrelor had more bleeding than clopidogrel when stopped within 1 day prior to surgery but a similar rate of major bleeds compared to clopidogrel after stopping therapy 2 or more days before surgery (see Adverse Reactions). If a patient is to undergo elective surgery and antiplatelet effect is not desired, ticagrelor should be discontinued 7 days prior to surgery (see Pharmacology: Pharmacodynamics under Actions).
Patients with prior ischemic stroke: ACS patients with prior ischemic stroke can be treated with Brilinta for up to 12 months (PLATO study).
In PEGASUS, patients with history of MI with prior ischemic stroke were not included. Therefore, in the absence of data, treatment beyond one year is not recommended in these patients.
Hepatic impairment: Use of ticagrelor is contraindicated in patients with severe hepatic impairment (see Dosage & Administration and Contraindications). There is limited experience with ticagrelor in patients with moderate hepatic impairment, therefore, caution is advised in these patients (see Dosage & Administration and Pharmacology: Pharmacokinetics under Actions).
Patients at risk for bradycardic events: Due to observations of mostly asymptomatic ventricular pauses in an earlier clinical study, patients with an increased risk of bradycardic events (e.g. patients without a pacemaker who have sick sinus syndrome, 2nd or 3rd degree AV block or bradycardic-related syncope) were excluded from the main PLATO study evaluating the safety and efficacy of Brilinta. Therefore, due to the limited clinical experience, Brilinta should be used with caution in these patients (see Pharmacology: Pharmacodynamics under Actions).
In addition, caution should be exercised when administering Brilinta concomitantly with medicinal products known to induce bradycardia. However no evidence of clinically significant adverse reactions was observed in the PLATO trial after concomitant administration with one or more medicinal products known to induce bradycardia (e.g., 96% beta blockers, 33% calcium channel blockers diltiazem and verapamil, and 4% digoxin) (see Interactions).
During the Holter substudy in PLATO, more patients had ventricular pauses ≥3 seconds with ticagrelor than with clopidogrel during the acute phase of their ACS. The increase in Holter-detected ventricular pauses with ticagrelor was higher in patients with chronic heart failure (CHF) than in the overall study population during the acute phase of ACS, but not at one month with ticagrelor or compared to clopidogrel. There were no adverse clinical consequences associated with this imbalance (including syncope or pacemaker insertion) in this patient population (see Pharmacology: Pharmacodynamics under Actions).
Dyspnoea: Dyspnoea was reported in patients treated with ticagrelor. Dyspnoea is usually mild to moderate in intensity and often resolves without need for treatment discontinuation. Patients with asthma/chronic obstructive pulmonary disease (COPD) may have an increased absolute risk of experiencing dyspnoea with ticagrelor. Ticagrelor should be used with caution in patients with history of asthma and/or COPD. The mechanism has not been elucidated. If a patient reports new, prolonged or worsened dyspnoea this should be investigated fully and if not tolerated, treatment with ticagrelor should be stopped. For further details see Adverse Reactions.
Creatinine elevations: Creatinine levels may increase during treatment with ticagrelor. The mechanism has not been elucidated. Renal function should be checked according to routine medical practice. In patients with ACS, it is recommended that renal function is also checked one month after initiating the treatment with ticagrelor, paying special attention to patients ≥75 years, patients with moderate/severe renal impairment and those receiving concomitant treatment with an angiotensin receptor blocker (ARB).
Uric acid increase: Hyperuricaemia may occur during treatment with ticagrelor (see Adverse Reactions). Caution should be exercised when administering ticagrelor to patients with history of hyperuricaemia or gouty arthritis. As a precautionary measure, the use of ticagrelor in patients with uric acid nephropathy is discouraged.
Other: Based on a relationship observed in PLATO between maintenance ASA dose and relative efficacy of ticagrelor compared to clopidogrel, co-administration of Brilinta and high maintenance dose ASA (>300 mg) is not recommended (see Pharmacology: Pharmacodynamics under Actions).
Premature discontinuation: Premature discontinuation with any antiplatelet therapy, including Brilinta, could result in an increased risk of cardiovascular (CV) death or MI due to the patient's underlying disease. Therefore, premature discontinuation of treatment should be avoided.
Effects on ability to drive and use machines: Ticagrelor has no or negligible influence on the ability to drive and use machines. During treatment with ticagrelor, dizziness has been reported. Therefore, patients who experience dizziness should be cautious while driving or using machines.