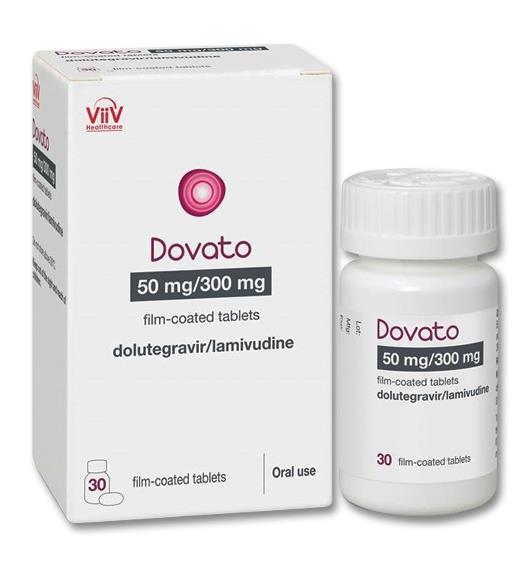 Concise Prescribing Info Full Prescribing Info Contents Description Action Indications/Uses Dosage/Direction for Use Overdosage Contraindications Special Precautions Use In Pregnancy & Lactation Adverse Reactions Drug Interactions Caution For Usage MIMS Class ATC Classification Regulatory Classification Presentation/Packing
Full Prescribing Info
Contents
Dolutegravir, lamivudine.
Description
Each film-coated tablet contains dolutegravir sodium equivalent to 50 mg dolutegravir and 300 mg lamivudine.
Excipients/Inactive Ingredients: Tablet core: Microcrystalline cellulose, Sodium starch glycolate (Type A), Magnesium Stearate, Mannitol, Povidone (K29/32), Sodium stearyl fumarate.
Tablet coating: Hypromellose, Polyethylene Glycol / Macrogol, Titanium dioxide.
Action
Pharmacotherapeutic group: Antivirals for systemic use, antivirals for treatment of HIV infections, combinations. ATC code: J05AR25.
Pharmacology: Pharmacodynamics: Mechanism of action: Dolutegravir inhibits HIV integrase by binding to the integrase active site and blocking the strand transfer step of retroviral Deoxyribonucleic acid (DNA) integration which is essential for the HIV replication cycle.
Lamivudine, via its active metabolite 5'-triphosphates (TP) (an analogue for cytidine), inhibits reverse transcriptase of HIV-1 and HIV-2 through incorporation of the monophosphate form into the viral DNA chain, resulting in chain termination. Lamivudine triphosphate shows significantly less affinity for host cell DNA polymerases.
Pharmacodynamic effects: Antiviral activity in cell culture: Dolutegravir and lamivudine have been shown to inhibit replication of lab-strains and clinical isolates of HIV in a number of cell types, including transformed T cell lines, monocyte/macrophage derived lines and primary cultures of activated peripheral blood mononuclear cells (PMBCs) and monocyte/macrophages. The concentration of active substance necessary to effect viral replication by 50% (IC50 - half maximal inhibitory concentration) varied according to virus and host cell type.
The IC50 for dolutegravir in various lab-strains using PBMC was 0.5 nM, and when using MT-4 cells it ranged from 0.7-2 nM. Similar IC50s were seen for clinical isolates without any major difference between subtypes; in a panel of 24 HIV-1 isolates of clades A, B, C, D, E, F and G and group O the mean IC50 value was 0.2 nM (range 0.02-2.14). The mean IC50 for 3 HIV-2 isolates was 0.18 nM (range 0.09-0.61).
The median or mean IC50 values for lamivudine against lab-strains of HIV-1 ranged from 0.007 to 2.3 μM. The mean IC50 against lab-strains of HIV-2 (LAV2 and EHO) ranged from 0.16 to 0.51 μM for lamivudine. The IC50 values of lamivudine against HIV-1 subtypes (A-G) ranged from 0.001 to 0.170 μM, against Group O from 0.030 to 0.160 μM and against HIV-2 isolates from 0.002 to 0.120 μM in peripheral blood mononuclear cells.
HIV-1 isolates (CRF01_AE, n=12; CRF02_AG, n=12; and Subtype C or CRF_AC, n=13) from 37 untreated patients in Africa and Asia were susceptible to lamivudine (IC50 fold changes < 3.0. Group O isolates from antiviral naïve patients tested for lamivudine activity were highly sensitive.
Effect of human serum: In 100% human serum, the mean fold shift for dolutegravir activity was 75 fold, resulting in protein adjusted IC90 of 0.064 μg/mL. Lamivudine exhibits linear pharmacokinetics over the therapeutic dose range and displays low plasma protein binding (less than 36%).
Resistance: Dovato is indicated in the absence of documented or suspected resistance to the integrase inhibitor class and to lamivudine (see Indications/Uses). For information around in vitro resistance, and cross resistance to other agents of the integrase- and NRTI class, please refer to the product information for dolutegravir and lamivudine.
None of the six subjects in the dolutegravir plus lamivudine group or the four subjects in the dolutegravir plus tenofovir disoproxil/emtricitabine FDC group that met virological withdrawal criteria through Week 48 across the GEMINI-1 (204861) and GEMINI-2 (205543) studies had treatment emergent integrase inhibitor or NRTI class resistance.
In previously untreated patients receiving dolutegravir + 2 NRTIs in Phase IIb and Phase III, no development of resistance to the integrase inhibitor class, or to the NRTI class was seen (n=1118 follow-up of 48-96 weeks).
Effects on electrocardiogram: No relevant effects were seen with dolutegravir on the QTc interval, with doses exceeding the clinical dose by approximately three fold. A similar study was not conducted with lamivudine.
Clinical efficacy and safety: The efficacy of Dovato is supported by data from 2 identical 148-week, Phase III, randomised, double-blind, multicentre, parallel-group, non-inferiority controlled trials GEMINI-1 (204861) and GEMINI-2 (205543). A total of 1433 HIV-1 infected antiretroviral treatment-naïve adult subjects received treatment in the trials. Subjects were enrolled with a screening plasma HIV-1 RNA of 1000 c/mL to ≤500,000 c/mL. Subjects were randomised to a two-drug regimen of dolutegravir 50 mg plus lamivudine 300 mg once daily or dolutegravir 50 mg plus tenofovir disoproxil/emtricitabine 245/200 mg once daily. The primary efficacy endpoint for each GEMINI trial was the proportion of subjects with plasma HIV-1 RNA <50 copies/mL at Week 48 (Snapshot algorithm for the ITT-E population). Double blind therapy will continue up to week 96, followed by open label therapy up to week 148.
At baseline, in the pooled analysis, the median age of subjects was 33 years, 15% were female, 68% were white, 9% were CDC Stage 3 (AIDS), 20% had HIV-1 RNA >100,000 copies/mL, and 8% had CD4+ cell count less than 200 cells per mm3; these characteristics were similar between studies and treatment arms.
At week 48, dolutegravir plus lamivudine was non-inferior to dolutegravir plus tenofovir disoproxil/emtricitabine FDC in GEMINI-1 and GEMINI-2 studies. This was supported by the pooled analysis, see Table 1. (See Table 1.)

Description of selected adverse reactions: Changes in laboratory biochemistries: Dolutegravir has been associated with an increase in serum creatinine occuring in the first week of treatment when administered with other antiretroviral medicinal products. Increases in serum creatinine occurred within the first four weeks of treatment with dolutegravir plus lamivudine and remained stable through 48 weeks. In the pooled GEMINI studies a mean change from baseline of 10.3 μmol/L (range: -36.3 μmol/L to 55.7 μmol/L) was observed after 48 weeks of treatment. These changes are linked to the inhibiting effect of dolutegravir on renal tubular transporters of creatinine. The changes are not considered to be clinically relevant and do not reflect a change in glomerular filtration rate.
Co-infection with Hepatitis B or C: In the Phase III studies for the dolutegravir single agent, patients with hepatitis B and/or C co-infection were permitted to enrol provided that baseline liver chemistry tests did not exceed 5 times the upper limit of normal (ULN). Overall, the safety profile in patients co-infected with hepatitis B and/or C was similar to that observed in patients without hepatitis B or C co-infection, although the rates of AST and ALT abnormalities were higher in the subgroup with hepatitis B and/or C co-infection for all treatment groups. Liver chemistry elevations consistent with immune reconstitution syndrome were observed in some subjects with hepatitis B and/or C co-infection at the start of dolutegravir therapy, particularly in those whose anti-hepatitis B therapy was withdrawn (see Precautions).
Metabolic parameters: Weight and levels of blood lipids and glucose may increase during antiretroviral therapy (see Precautions).
Osteonecrosis: Cases of osteonecrosis have been reported, particularly in patients with generally acknowledged risk factors, advanced HIV disease or long-term exposure to CART. The frequency of this is unknown (see Precautions).
Immune response syndrome: In HIV-infected patients with severe immune deficiency at the time of initiation of combination antiretroviral therapy (CART), an inflammatory reaction to asymptomatic or residual opportunistic infections may arise. Autoimmune disorders (such as Graves' disease and autoimmune hepatitis) have also been reported; however, the reported time to onset is more variable and these events can occur many months after initiation of treatment (see Precautions).
Reporting of suspected adverse reactions: Reporting suspected adverse reactions after authorisation of the medicinal product is important. It allows continued monitoring of the benefit/risk balance of the medicinal product.
View ADR Monitoring Form
Drug Interactions
No drug interaction studies have been conducted using Dovato. Dovato contains dolutegravir and lamivudine, therefore any interactions identified for these individually are relevant to Dovato. No clinically significant drug interactions are expected between dolutegravir and lamivudine.
Effect of other medicinal products on the pharmacokinetics of dolutegravir and lamivudine: Dolutegravir is eliminated mainly through metabolism by uridine diphosphate glucuronosyl transferase (UGT) 1A1. Dolutegravir is also a substrate of UGT1A3, UGT1A9, CYP3A4, P-glycoprotein (P-gp), and breast cancer resistance protein (BCRP). Co-administration of Dovato and other medicinal products that inhibit UGT1A1, UGT1A3, UGT1A9, CYP3A4, and/or P-gp may, therefore, increase dolutegravir plasma concentration. Medicinal products that induce those enzymes or transporters may decrease dolutegravir plasma concentration and reduce the therapeutic effect of dolutegravir.
The absorption of dolutegravir is reduced by certain metal cation-containing anti-acid substances and supplements (see Table 3).
Lamivudine is cleared renally. Active renal secretion of lamivudine in the urine is mediated through the organic cation transporter (OCT) 2 and multidrug and toxin extrusion transporters (MATE1 and MATE2-K). Trimethoprim (an inhibitor of these transporters) has been shown to increase lamivudine plasma concentrations, however the resulting increase was not clinically significant (see Table 3). Dolutegravir is an OCT2 and MATE1 inhibitor; however, lamivudine concentrations were similar with or without co-administration of dolutegravir based on a cross study analysis, indicating that dolutegravir has no relevant effect on lamivudine exposure in vivo. Lamivudine is also substrate of the hepatic uptake transporter OCT1. As hepatic elimination plays a minor role in the clearance of lamivudine, drug interactions due to inhibition of OCT1 are unlikely to be of clinical significance.
Although lamivudine is a substrate of BCRP and P-gp in vitro, given its high absolute bioavailability, (see Pharmacology: Pharmacokinetics under Actions), inhibitors of these efflux transporters are unlikely to result in a clinically relevant impact on lamivudine concentrations.
Effect of dolutegravir and lamivudine on the pharmacokinetics of other medicinal products: In vivo, dolutegravir did not have an effect on midazolam, a CYP3A4 probe. Based on in vivo and/or in vitro data, dolutegravir is not expected to affect the pharmacokinetics of medicinal products that are substrates of any major enzyme or transporter such as CYP3A4, CYP2C9 and P-gp (for more information see Pharmacology: Pharmacokinetics under Actions ).
In vitro, dolutegravir inhibited the renal transporters OCT2 and MATE1. In vivo, a 10-14% decrease of creatinine clearance (secretory fraction is dependent on OCT2 and MATE-1 transport) was observed in patients. In vivo, dolutegravir may increase plasma concentrations of medicinal products in which excretion is dependent upon OCT2 or MATE-1 (e.g. metformin) (see Table 3 and Contraindications).
In vitro, dolutegravir inhibited the renal uptake organic anion transporters (OAT)1 and OAT3. Based on the lack of effect on the in vivo pharmacokinetics of the OAT substrate tenofovir, in vivo inhibition of OAT1 is unlikely. Inhibition of OAT3 has not been studied in vivo. Dolutegravir may increase plasma concentrations of medicinal products in which excretion is dependent upon OAT3.
In vitro, lamivudine was an inhibitor of OCT1 and OCT2; the clinical consequences are not known.
Established and theoretical interactions with selected antiretrovirals and non-antiretroviral medicinal products are listed in Table 3.
Interaction table: Interactions between dolutegravir, lamivudine and co-administered medical products are listed in Table 3 (increase is indicated as "↑", decrease as "↓", no change as "↔", area under the concentration versus time curve as "AUC", maximum observed concentration as "Cmax"). The table should not be considered exhaustive but is representative of the classes studied. (See Table 3.)

Caution For Usage
Special precautions for disposal: No special requirements for disposal.
Incompatibilities: Not applicable.
MIMS Class
Antivirals
ATC Classification
J05AR25 - lamivudine and dolutegravir ; Belongs to the class of antivirals for treatment of HIV infections, combinations.