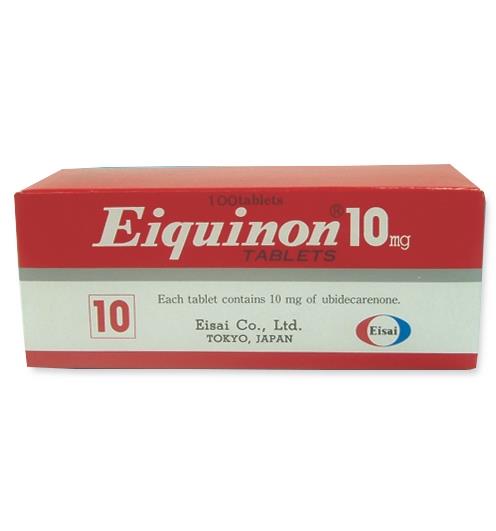 Concise Prescribing Info Full Prescribing Info Contents Description Action Indications/Uses Dosage/Direction for Use Adverse Reactions Storage MIMS Class ATC Classification Regulatory Classification Presentation/Packing
Full Prescribing Info
Contents
Ubidecarenone.
Description
Ubidecarenone is 2,3-dimethoxy-5-methyl-6-decaprenyl-benzoquinone. Molecular Formula: C59H90O4. Molecular Weight: 863.36.
Ubidecarenone occurs as a yellow to orange crystalline powder and has no odor or taste. It is very soluble in chloroform and carbon tetrachloride, freely soluble in dioxane, ether and hexane, sparingly soluble in acetone and practically insoluble in water, methanol and ethanol. Ubidecarenone is gradually decomposed and turns a dark color when exposed to light. Melting Point: Approximately 48°C.
Action
Ubidecarenone (Coenzyme Q10 or Ubiquinone 50), the active ingredient of Eiquinon, was first isolated in 1957, as a fat-soluble crystal from the bovine heart muscle. Later, Cooley and Folkers and their co-workers, demonstrated that ubidecarenone activity is low in the heart muscle of patients with heart disease. Ubidecarenone (CoQ10), administered orally, is absorbed via the lymphatic system and is incorporated into intracellular mitochondria. It has not been confirmed that CoQ10 acts directly on ischemic myocardium and improves the efficiency of oxygen utilization. These actions of CoQ10 enable the heart muscle to maintain energy producing functions at a high level, even under ischemic conditions, thus reducing ischemia-induced myocardial damage. Clinically, the effect of CoQ10 on myocardiac disorders was studied observing electrocardiograms at rest and with exercise loading, and it was confirmed that CoQ10 administration normalized the depressed cardiac function. Furthermore, double-blind controlled clinical trials have demonstrated the efficacy of Eiquinon in treating the symptoms of congestive heart failure associated with decreased left ventricular function due to chronically ischemic heart or hypertensive heart disease.
Pharmacology: Improvement of oxygen utilization efficiency in ischemic myocardium: An experiment using guinea-pig ventricular muscle has shown that ubidecarenone corrects decreases in contractile tension which occur under hypoxic perfusion using Tyrode's perfusate, as well as decreases in the duration of action potential under hypoxic conditions.
Activation of ATP synthesis in myocardial mitochondria: Ubidecarenone corrected the respiratory control ratio and ATP synthesis in ischemic myocardial mitochondria in an experiment in dogs. It also inhibited decreases in ATP synthesis associated with ischemia and re-perfusion and increased ATP synthesis in a perfusion experiment using rabbit and rat heart.
Improvement of decreased cardiac function: In an experiment in rats, ubidecarenone inhibited decreases in myocardial contractility due to ischemia and re-perfusion and improved decreased cardiac function.
Myocardial protection: Ubidecarenone has an antioxidant effect and stabilizes the cell membrane; it was found to inhibit myocardial damage caused by doxorubicin HCl in rats. It also inhibited the release of myocardial enzymes into the blood caused by experimental ischemia in dogs.
Antialdosterone effect: An experiment in rats has shown that ubidecarenone inhibits the secretion of aldosterone and antagonizes Na+ retention brought about by aldosterone, resulting in the acceleration of Na+ diuresis. However, ubidecarenone had no effect on K+ excretion.
Pharmacokinetics: In healthy subjects given a single oral dose (100 mg of ubidecarenone) of 10 tabs of Eiquinon 10 mg in a cross-over study, the peak plasma concentration (0.5-0.55 mcg/mL of exogenous CoQ10) was attained 6 hrs after dosing; thereafter, plasma levels gradually declined. There was no statistically significant difference between the response from the 2 different formulation types.
Clinical Studies:
Clinical Effects: In double-blind and open clinical studies, Eiquinon has been demonstrated to be effective and useful for treating signs and subjective symptoms (edema, pulmonary congestion, hepatic enlargement and anginal symptoms) associated with congestive heart failure due to ischemic heart disease, hypertensive or rheumatic heart disease.
Adverse Reactions: Out of 5350 patients treated with Eiquinon, adverse reactions were reported for 78 patients (1.46%). The most common untoward effects included gastric discomfort in 21 cases (0.39%), anorexia in 13 cases (0.24%), nausea in 10 cases (0.19%), diarrhea in 6 cases (0.11%) and skin rash in 9 cases (0.17%).
Influence on Laboratory Values: No changes in laboratory values have been attributable to Eiquinon.
Animal Studies:
Absorption, Distribution and Excretion:
In rats and rabbits given a single oral dose of 0.6 mg/kg of 1,2-3H-ubidecarenone, the peak plasma concentration was attained 1 hr and 2 hrs, respectively, after administration, thereafter the labeled ubidecarenone disappeared from the plasma in a biphasic pattern. When given orally, CoQ10 is absorbed from the wall of the small intestine, after having been emulsified mainly with bile salts, and is incorporated into chylomicrons. It is then transported to the blood via the thymic lymph. In rats, CoQ10 was distributed primarily to the lungs, heart, testes, liver and kidneys within 4 hrs after administration. Increased tissue concentrations were found in the adrenal glands, liver and stomach 10 hrs after dosing. Within the first 7 days after administration to rats, 1.9 and 85% of the dose were recovered in the urine and feces, respectively. In rabbits, 2.9 and 91% of the administered dose were excreted in the urine and feces, respectively, over a 7-day period.
Acute Toxicity LD50 (mg/kg) (see table):

Subacute Toxicity: Oral administration of Eiquinon at doses of 40, 200 and 1000 mg/kg/day for 5 weeks to male or female rats, and at doses of 6, 60 and 600 mg/kg/day for 23 consecutive days to male or female rabbits caused no remarkable changes in general condition, hematological analyses, urine analyses, nor morphology.
Chronic Toxicity: When male or female rats were given CoQ10 orally at doses of 6, 60 or 600 mg/kg/day for 26 consecutive weeks, no remarkable adverse changes were observed in the general condition, hematological analyses, urine analyses, nor morphology.
Reproduction Studies:
Pre- and Early Stages of Pregnancy: In rats of both sexes given CoQ10 in an oral dose of 10, 100 or 1000 mg/kg/day, gestation was normal and implantation was not affected. The drug did not induce growth retardation nor deformities in the fetuses.
Period of Fetal Organogenesis: When pregnant rats and rabbits received CoQ10 at oral doses of 10, 100 or 1000 mg/kg/day during organogenesis, there were no abnormal findings with respect to the dams, the fetuses nor the offspring. No evidence of dysmorphogenesis was seen.
Perinatal and Lactation Periods: Oral doses of 10, 100 or 1000 mg/kg/day of CoQ10 administered to female rats during perinatal and lactation periods did not produce adverse effects on the dams, nor on the formation, the growth, the functioning and the reproductive ability of the offspring or the F2 fetuses.
Indications/Uses
Symptoms associated with mild and moderate congestive heart failure in patients under standard treatment.
Dosage/Direction for Use
Adults: Usual Dosage: 1 tab 3 times/day, to be taken orally after meals.
Adverse Reactions
Gastrointestinal: Gastric discomfort, anorexia, nausea or diarrhea may occasionally occur.
Dermatological: Symptoms eg, skin rash may occasionally occur.
View ADR Monitoring Form
Storage
Store at room temperature (1-30°C). Protect from moisture. Use before the expiration date stated on the package.
MIMS Class
Other Cardiovascular Drugs
ATC Classification
C01EB09 - ubidecarenone ; Belongs to the class of other cardiac preparations.