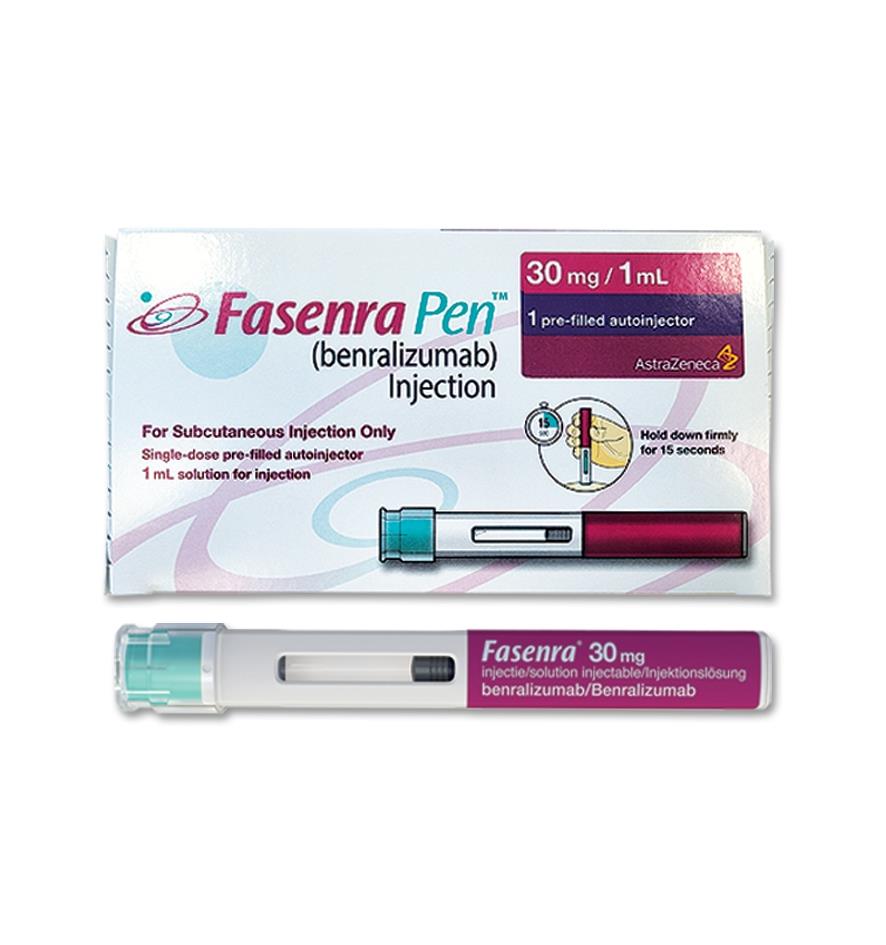 Concise Prescribing Info Full Prescribing Info Contents Description Action Indications/Uses Dosage/Direction for Use Overdosage Contraindications Special Precautions Use In Pregnancy & Lactation Adverse Reactions Drug Interactions Caution For Usage Storage MIMS Class ATC Classification Regulatory Classification Presentation/Packing
Full Prescribing Info
Contents
Benralizumab.
Description
Each pre-filled syringe contains 30 mg benralizumab* in 1 ml.
*Benralizumab is a humanised monoclonal antibody produced in Chinese hamster ovary (CHO) cells by recombinant DNA technology.
Excipients/Inactive Ingredients: Histidine, Histidine hydrochloride monohydrate, Trehalose dihydrate, Polysorbate 20, Water for injections.
Action
Pharmacotherapeutic group: Drugs for obstructive airway diseases, other systemic drugs for obstructive airway diseases. ATC code: R03DX10.
Pharmacology: Pharmacodynamics: Mechanism of action: Benralizumab is an anti-eosinophil, humanised afucosylated, monoclonal antibody (IgG1, kappa). It binds to the alpha subunit of the human interleukin-5 receptor (IL-5Rα) with high affinity and specificity. The IL-5 receptor is specifically expressed on the surface of eosinophils and basophils. The absence of fucose in the Fc domain of benralizumab results in high affinity for FcγRIII receptors on immune effectors cells such as natural killer (NK) cells. This leads to apoptosis of eosinophils and basophils through enhanced antibody-dependent cell-mediated cytotoxicity (ADCC), which reduces eosinophilic inflammation.
Pharmacodynamic effects: Effect on blood eosinophils: Treatment with benralizumab results in near complete depletion of blood eosinophils within 24 hours following the first dose which is maintained throughout the treatment period. The depletion of blood eosinophils is accompanied by a reduction in serum eosinophil granule proteins eosinophil derived neurotoxin (EDN) and eosinophil cationic protein (ECP) and a reduction in blood basophils.
Effect on eosinophils in the airway mucosa: The effect of benralizumab on eosinophils in the airway mucosa in asthmatic patients with elevated sputum eosinophil counts (at least 2.5%) was evaluated in a 12-week, phase 1, randomised, double-blind, placebo-controlled clinical study with benralizumab 100 or 200 mg SC. In this study there was a median reduction from baseline in airway mucosa eosinophils of 96% in the benralizumab treated group compared to a 47% reduction in the placebo group (p=0.039).
Clinical efficacy: The efficacy of Fasenra was evaluated in 3 randomised, double-blind, parallel-group, placebo-controlled clinical trials between 28 to 56 weeks duration, in patients aged 12 to 75 years.
In these studies, Fasenra was administered at a dose of 30 mg once every 4 weeks for the first 3 doses, and then every 4 or 8 weeks thereafter as add-on to background treatment and was evaluated in comparison with placebo.
The two exacerbation trials, SIROCCO (Trial 1) and CALIMA (Trial 2), enrolled a total of 2,510 patients with severe uncontrolled asthma, 64% females, with a mean age of 49 years. Patients had a history of 2 or more asthma exacerbations requiring oral or systemic corticosteroid treatment (mean of 3) in the past 12 months, ACQ-6 score of 1.5 or more at screening, and reduced lung function at baseline (mean predicted pre-bronchodilator forced expiratory volume in 1 second [FEV1] of 57.5%), despite regular treatment with high-dose inhaled corticosteroid (ICS) (Trial 1) or with medium or high-dose ICS (Trial 2) and a long-acting β-agonist (LABA); at least one additional controller was administered to 51% and 41% of these patients, respectively.
For the oral corticosteroid (OCS) reduction trial ZONDA (Trial 3), a total of 220 asthma patients (61% female; mean age of 51 years) were enrolled; they were treated with daily OCS (8 to 40 mg per day; median of 10 mg) in addition to regular use of high-dose ICS and LABA with at least one additional controller to maintain asthma control in 53% of the cases. The trial included an 8-week run-in period during which the OCS was titrated to the minimum effective dose without losing asthma control. Patients had blood eosinophil counts ≥150 cells/μL and a history of at least one exacerbation in the past 12 months.
While 2 dosing regimens were studied in Trials 1, 2, and 3, the recommended dosing regimen is Fasenra administered every 4 weeks for the first 3 doses, then every 8 weeks thereafter (see Dosage & Administration) as no additional benefit was observed by more frequent dosing. The results summarised as follows are those for the recommended dosing regimen.
Exacerbation trials: The primary endpoint was the annual rate of clinically significant asthma exacerbations in patients with baseline blood eosinophil counts ≥300 cells/μL who were taking high-dose ICS and LABA. Clinically significant asthma exacerbation was defined as worsening of asthma requiring use of oral/systemic corticosteroids for at least 3 days, and/or emergency department visits requiring use of oral/systemic corticosteroids and/or hospitalisation. For patients on maintenance oral corticosteroids, this was defined as a temporary increase in stable oral/systemic corticosteroids for at least 3 days or a single depo-injectable dose of corticosteroids.
In both trials, patients receiving Fasenra experienced significant reductions in annual exacerbation rates compared to placebo in patients with blood eosinophils ≥300 cells/μL. In addition, change from baseline in mean FEV1 showed benefit as early as 4 weeks, which was maintained through to end of treatment (Table 1).
Reductions in exacerbation rates were observed irrespective of baseline eosinophil count; however, increasing baseline eosinophil counts was identified as a potential predictor of improved treatment response particularly for FEV1. (See Table 1.)

Across Trials 1 and 2 combined, there was a numerically greater exacerbation rate reduction and greater improvements in FEV1 with increasing baseline blood eosinophils.
The rate of exacerbations requiring hospitalisation and/or emergency room visits for patients receiving Fasenra compared to placebo for Trial 1 were 0.09 versus 0.25 (rate ratio 0.37, 95% CI: 0.20, 0.67, p=<0.001) and for Trial 2 were 0.12 versus 0.10 (rate ratio 1.23, 95% CI: 0.64, 2.35, p=0.538). In Trial 2, there were too few events in the placebo treatment arm to draw conclusions for exacerbations requiring hospitalisation or emergency room visits.
In both Trials 1 and 2, patients receiving Fasenra experienced statistically significant reductions in asthma symptoms (Total Asthma Score) compared to patients receiving placebo. Similar improvement in favour of Fasenra was observed for the Asthma Control Questionnaire-6 (ACQ-6) and Standardised Asthma Quality of Life Questionnaire for 12 Years and Older (AQLQ(S)+12) (Table 2). (See Table 2.)

Subgroup analyses by prior exacerbation history: Subgroup analyses from Trials 1 and 2 identified patients with higher prior exacerbation history as a potential predictor of improved treatment response. When considered alone or in combination with baseline blood eosinophils count, these factors may further identify patients who may achieve greater response from benralizumab treatment (Table 3). (See Table 3.)

Oral corticosteroid dose reduction trial: Trial 3 evaluated the effect of Fasenra on reducing the use of maintenance oral corticosteroids. The primary endpoint was percent reduction from baseline of the final OCS dose during Weeks 24 to 28, while maintaining asthma control. Table 4 summarizes the study results for Trial 3. (See Table 4.)

Description of selected adverse reaction: Injection site reactions: In placebo-controlled studies, injection site reactions (e.g. pain, erythema, pruritus, papule) occurred at a rate of 2.2% in patients treated with the recommended benralizumab dose compared with 1.9% in patients treated with placebo.
Paediatric population: There are limited data in paediatric patients (see Pharmacology: Pharmacodynamics under Actions). The frequency, type and severity of adverse reactions in the adolescent population were observed to be similar to those seen in adults.
Reporting of suspected adverse reactions: Reporting suspected adverse reactions after authorisation of the medicinal product is important. It allows continued monitoring of the benefit/risk balance of the medicinal product. Healthcare professionals are recommended to report any suspected adverse reactions to AstraZeneca.
View ADR Monitoring Form
Drug Interactions
No formal drug interaction studies have been conducted. An effect of benralizumab on the pharmacokinetics of co-administered medicinal products is not expected (see Pharmacology: Pharmacokinetics under Actions).
Cytochrome P450 enzymes, efflux pumps and protein-binding mechanisms are not involved in the clearance of benralizumab. There is no evidence of IL-5Rα expression on hepatocytes. Eosinophil depletion does not produce chronic systemic alterations of proinflammatory cytokines.
Caution For Usage
Special precautions for disposal and other handling: Fasenra solution for injection is supplied in a sterile single-use pre-filled syringe for individual use. Do not shake. Do not use if frozen.
Instructions for administration: Prior to administration, warm Fasenra by leaving carton at room temperature. This generally takes 30 minutes. Administer within 24 hours or discard into sharps container.
Instructions for Pre-filled Syringe with Needle Safety Guard: Do not touch the needle guard activation clips to prevent premature activation of the needle safety guard.
1. Grasp the syringe body, not the plunger, to remove pre-filled syringe from the tray. Check the expiry date on the syringe. Visually inspect Fasenra for particulate matter and discolouration prior to administration. Fasenra is clear to opalescent, colourless to yellow, and may contain translucent or white to off-white particles. Do not use Fasenra if liquid is cloudy, discoloured, or if it contains large particles or foreign particulate matter. The syringe may contain a small air bubble; this is normal. Do not expel the air bubble prior to administration.
2. Do not remove needle cover until ready to inject. Hold the syringe body and remove the needle cover by pulling straight off. Do not hold the plunger or plunger head while removing the needle cover or the plunger may move. If pre-filled syringe is damaged or contaminated (for example, dropped without needle cover in place), discard and use a new pre-filled syringe.
3. Gently pinch the skin and insert the needle at the recommended injection site (i.e. upper arm, thighs, or abdomen).
4. Inject all of the solution by pushing in the plunger all the way until the plunger head is completely between the needle guard activation clips. This is necessary to activate the needle guard.
5. After injection, maintain pressure on the plunger head and remove the needle from the skin. Release pressure on the plunger head to allow the needle guard to cover the needle. Do not re-cap the pre-filled syringe.
6. Discard the used syringe into a sharps container.
Incompatibilities: In the absence of compatibility studies, this medicinal product must not be mixed with other medicinal products.
Storage
Store at 2°C-8°C in the original package to protect from light. Do not freeze or shake.
MIMS Class
Antiasthmatic & COPD Preparations
ATC Classification
R03DX10 - benralizumab ; Belongs to the class of other systemic drugs used in the treatment of obstructive airway diseases.