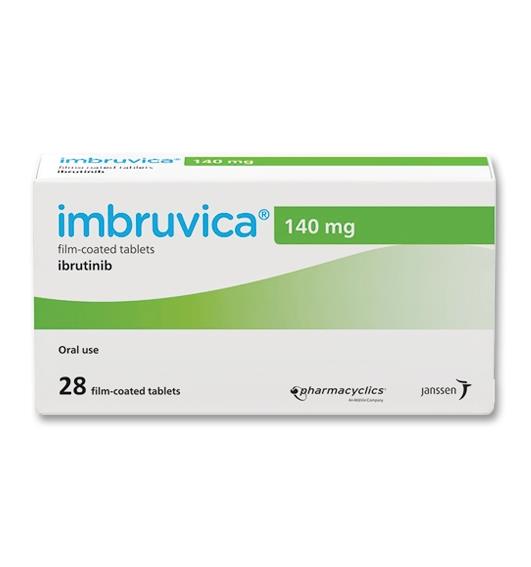 Concise Prescribing Info Full Prescribing Info Contents Description Action Indications/Uses Dosage/Direction for Use Overdosage Contraindications Special Precautions Use In Pregnancy & Lactation Adverse Reactions Drug Interactions Caution For Usage Storage MIMS Class ATC Classification Regulatory Classification Presentation/Packing
Full Prescribing Info
Special Precautions
Bleeding-related events: There have been reports of haemorrhagic events in patients treated with IMBRUVICA, both with and without thrombocytopenia. These include minor haemorrhagic events such as contusion, epistaxis, and petechiae; and major haemorrhagic events, some fatal, including gastrointestinal bleeding, intracranial haemorrhage, and haematuria.
Patients were excluded from participation in IMBRUVICA phase 2 and 3 studies if they required warfarin or other vitamin K antagonists. Warfarin or other vitamin K antagonists should not be administered concomitantly with IMBRUVICA. Supplements such as fish oil and vitamin E preparations should be avoided. Use of IMBRUVICA in patients requiring other anticoagulants or medicinal products that inhibit platelet function may increase the risk of bleeding, and particular care should be taken if anticoagulant therapy is used.
IMBRUVICA should be held at least 3 to 7 days pre- and post-surgery depending upon the type of surgery and the risk of bleeding.
The mechanism for the bleeding-related events is not fully understood. Patients with congenital bleeding diathesis have not been studied.
Leukostasis: Cases of leukostasis have been reported in patients treated with IMBRUVICA. A high number of circulating lymphocytes (> 400,000/mcL) may confer increased risk. Consider temporarily holding IMBRUVICA. Patients should be closely monitored. Administer supportive care including hydration and/or cytoreduction as indicated.
Infections: Infections (including sepsis, neutropenic sepsis, bacterial, viral, or fungal infections) were observed in patients treated with IMBRUVICA. Some of these infections have been associated with hospitalisation and death. Most patients with fatal infections also had neutropenia. Patients should be monitored for fever, neutropenia and infections and appropriate anti-infective therapy should be instituted as indicated. Consider prophylaxis according to standard of care in patients who are at increased risk for opportunistic infections.
Cases of Progressive Multifocal Leukoencephalopathy (PML) including fatal ones have been reported following the use of ibrutinib within the context of a prior or concomitant immunosuppressive therapy. Physicians should consider PML in the diﬀerential diagnosis in patients with new or worsening neurological, cognitive or behavioral signs or symptoms. If PML is suspected then appropriate diagnostic evaluations should be undertaken and treatment suspended until PML is excluded. If any doubt exists, referral to a neurologist and appropriate diagnostic measures for PML including MRI scan preferably with contrast, cerebrospinal ﬂuid (CSF) testing for JC Viral DNA and repeat neurological assessments should be considered.
Cytopenias: Treatment-emergent grade 3 or 4 cytopenias (neutropenia, thrombocytopenia and anaemia) were reported in patients treated with IMBRUVICA. Monitor complete blood counts monthly.
Interstitial Lung Disease (ILD): Cases of ILD have been reported in patients treated with IMBRUVICA. Monitor patients for pulmonary symptoms indicative of ILD. If symptoms develop, interrupt IMBRUVICA and manage ILD appropriately. If symptoms persist, consider the risks and benefits of IMBRUVICA treatment and follow the dose modification guidelines.
Cardiac arrhythmia: Atrial ﬁbrillation, atrial ﬂutter and cases of ventricular tachyarrhythmia have been reported in patients treated with IMBRUVICA. Cases of atrial ﬁbrillation and atrial ﬂutter have been reported particularly in patients with cardiac risk factors, hypertension, acute infections, and a previous history of atrial ﬁbrillation. Periodically monitor all patients clinically for cardiac arrhythmia. Patients who develop arrhythmic symptoms or new onset of dyspnoea, dizziness or fainting should be evaluated clinically and if indicated have an electrocardiogram (ECG) performed.
In patients who develop signs and/or symptoms of ventricular tachyarrhythmia, IMBRUVICA should be temporarily discontinued and a thorough clinical beneﬁt/risk assessment should be performed before possibly restarting therapy.
In patients with preexisting atrial ﬁbrillation requiring anticoagulant therapy, alternative treatment options to IMBRUVICA should be considered. In patients who develop atrial ﬁbrillation on therapy with IMBRUVICA a thorough assessment of the risk for thromboembolic disease should be undertaken. In patients at high risk and where alternatives to IMBRUVICA are non-suitable, tightly controlled treatment with anticoagulants should be considered.
Tumour lysis syndrome: Tumour lysis syndrome has been reported with IMBRUVICA therapy. Patients at risk of tumour lysis syndrome are those with high tumour burden prior to treatment. Monitor patients closely and take appropriate precautions.
Non-melanoma skin cancer: Non-melanoma skin cancers were reported more frequently in patients treated with IMBRUVICA than in patients treated with comparators in pooled comparative randomised phase 3 studies. Monitor patients for the appearance of non-melanoma skin cancer.
Viral reactivation: Cases of hepatitis B reactivation have been reported in patients receiving IMBRUVICA. Hepatitis B virus (HBV) status should be established before initiating treatment with IMBRUVICA. For patients who test positive for HBV infection, consultation with a physician with expertise in the treatment of hepatitis B is recommended. If patients have positive hepatitis B serology, a liver disease expert should be consulted before the start of treatment and the patient should be monitored and managed following local medical standards to prevent hepatitis B reactivation.
Drug-drug interactions: Co-administration of strong or moderate CYP3A4 inhibitors with IMBRUVICA may lead to increased ibrutinib exposure and consequently a higher risk for toxicity. On the contrary, co-administration of CYP3A4 inducers may lead to decreased IMBRUVICA exposure and consequently a risk for lack of efficacy. Therefore, concomitant use of IMBRUVICA with strong CYP3A4 inhibitors and strong or moderate CYP3A4 inducers should be avoided whenever possible and co-administration should only be considered when the potential benefits clearly outweigh the potential risks. Patients should be closely monitored for signs of IMBRUVICA toxicity if a CYP3A4 inhibitor must be used (see Dosage & Administration and Interactions). If a CYP3A4 inducer must be used, closely monitor patients for signs of IMBRUVICA lack of efficacy.
Women of childbearing potential: Women of childbearing potential must use a highly effective method of contraception while taking IMBRUVICA (see Use in Pregnancy & Lactation).
Effects on ability to drive and use machines: Fatigue, dizziness and asthenia have been reported in some patients taking IMBRUVICA and should be considered when assessing a patient's ability to drive or operate machines.