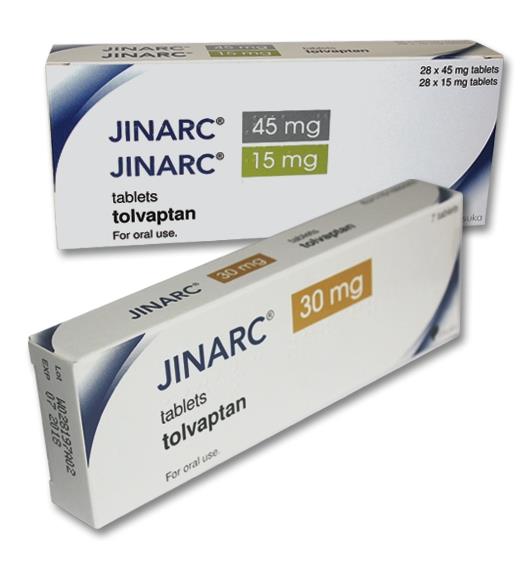 Description of selected adverse reactions: To mitigate the risk of significant or irreversible liver injury, blood testing for hepatic transaminases is required prior to initiation of Jinarc treatment, continuing monthly for 18 months and at regular 3-monthly intervals thereafter (see Precautions).
The most frequent adverse reactions are related to water loss. It is therefore of greatest importance that patients have access to water and are able to drink sufficient amounts of fluids. The volume status of patients taking tolvaptan must be monitored to prevent dehydration (see Precautions).
Reporting of suspected adverse reactions: Reporting suspected adverse reactions after authorisation of the medicinal product is important. It allows continued monitoring of the benefit/risk balance of the medicinal product. Healthcare professionals are asked to report any suspected adverse reactions to the company and Drug Office, Department of Health.
View ADR Monitoring Form
Drug Interactions
Effect of other medicinal products on the pharmacokinetics of tolvaptan: CYP3A inhibitors: Concomitant use of medicinal products that are moderate CYP3A inhibitors (e.g. amprenavir, aprepitant, atazanavir, ciprofloxacin, crizotinib, darunavir/ritonavir, diltiazem, erythromycin, fluconazole, fosamprenavir, imatinib, verapamil) or strong CYP3A inhibitors (e.g., itraconazole, ketoconazole, ritonavir, clarithromycin) increase tolvaptan exposure. Co-administration of tolvaptan and ketoconazole resulted in a 440% increase in area under time-concentration curve (AUC) and 248% increase in maximum observed plasma concentration (Cmax) for tolvaptan.
Co-administration of tolvaptan and fluconazole, a moderate CYP3A inhibitor, produced a 200 % and 80 % increase in tolvaptan AUC and Cmax, respectively.
Co-administration of tolvaptan with grapefruit juice, a moderate to strong CYP3A inhibitor, produced a doubling of peak tolvaptan concentrations (Cmax). Dose reduction of tolvaptan is recommended for patients while taking moderate or strong CYP3A inhibitors (see Dosage & Administration). Patients taking moderate or strong CYP3A inhibitors must be managed cautiously, in particular if the inhibitors are taken more frequently than once a day.
CYP3A inducers: Concomitant use of medicinal products that are potent CYP3A inducers (e.g., rifampicin) will decrease tolvaptan exposure and efficacy. Co-administration of tolvaptan with rifampicin reduces Cmax and AUC for tolvaptan by about 85%. Therefore, concomitant administration of tolvaptan with potent CYP3A inducers (e.g., rifampicin, rifabutin, rifapentine, phenytoin, carbamazepine, and St. John's Wort) is to be avoided.
Co-administration with medicinal products that increase serum sodium concentration: There is no experience from controlled clinical trials with concomitant use of tolvaptan and hypertonic sodium chloride solution, oral sodium formulations, and medicinal products that increase serum sodium concentration. Medicinal products with high sodium content such as effervescent analgesic preparations and certain sodium-containing treatments for dyspepsia may also increase serum sodium concentration. Concomitant use of tolvaptan with medicinal products that increase serum sodium concentration may result in a higher risk for developing hypernatraemia (see Precautions) and is therefore not recommended.
Diuretics: Tolvaptan has not been extensively studied in ADPKD in combination with diuretics. While there does not appear to be a synergistic or additive effect of concomitant use of tolvaptan with loop and thiazide diuretics, each class of agent has the potential to lead to severe dehydration, which constitutes a risk factor for renal dysfunction. If dehydration or renal dysfunction becomes evident, appropriate action must be taken which may include the need to interrupt or reduce doses of tolvaptan and/or diuretics and increased fluid intake. Other potential causes of renal dysfunction or dehydration must be evaluated and addressed.
Effect of tolvaptan on the pharmacokinetics of other products: CYP3A substrates: In healthy subjects, tolvaptan, a CYP3A substrate, had no effect on the plasma concentrations of some other CYP3A substrates (e.g. warfarin or amiodarone). Tolvaptan increased plasma levels of lovastatin by 1.3- to 1.5-fold. Even though this increase has no clinical relevance, it indicates tolvaptan can potentially increase exposure to CYP3A4 substrates.
Transporter substrates: In vitro studies indicate that tolvaptan is a substrate and competitive inhibitor of P-glycoprotein (P-gp). In vitro studies indicate that tolvaptan or its oxobutyric metabolite may have the potential to inhibit OATP1B1, OATP1B3, OAT3, BCRP and OCT1 transporters.
Steady state digoxin concentrations were increased (1.3-fold in maximum observed plasma concentration [Cmax] and 1.2-fold in area under the plasma concentration-time curve over the dosing interval [AUCτ]) when co-administered with multiple once daily 60 mg doses of tolvaptan. Patients receiving digoxin or other narrow therapeutic P-gp substrates (e.g., dabigatran) must therefore be managed cautiously and evaluated for excessive effects when treated with tolvaptan.
Statins commonly used in the tolvaptan phase 3 pivotal trial (e.g., rosuvastatin and pitavastatin) are OATP1B1 or OATP1B3 substrates, however no difference in AE profile was observed during the phase 3 pivotal trial for tolvaptan in ADPKD.
If OATP1B1 and OATP1B3 substrates (e.g., statins such as rosuvastatin and pitavastatin), OAT3 substrates (e.g., methotrexate, ciprofloxacin), BCRP substrates (e.g. sulfasalazine) or OCT1 substrates (e.g. metformin) are co-administered with tolvaptan, patients must be managed cautiously and evaluated for excessive effects of these medicinal products.
Diuretics or non-diuretic anti-hypertensive medicinal products(s): Standing blood pressure was not routinely measured in ADPKD trials, therefore a risk of orthostatic/postural hypotension due to a pharmacodynamic interaction with tolvaptan cannot be excluded.
Co-administration with vasopressin analogues: In addition to its renal aquaretic effect, tolvaptan is capable of blocking vascular vasopressin V2 receptors involved in the release of coagulation factors (e.g., von Willebrand factor) from endothelial cells. Therefore, the effect of vasopressin analogues such as desmopressin may be attenuated in patients using such analogues to prevent or control bleeding when co-administered with tolvaptan. It is not recommended to administer Jinarc with vasopressin analogues.
Smoking and alcohol: Data related to smoking or alcohol history in ADPKD trials are too limited to determine possible interactions of smoking or alcohol with efficacy and safety of ADPKD treatment with tolvaptan.
Caution For Usage
Special precautions for disposal and other handling: Any unused medicinal product or waste material should be disposed of in accordance with local requirements.
Incompatibilities: Not applicable.
Storage
Store in the original package in order to protect from light and moisture.
MIMS Class
Diuretics
ATC Classification
C03XA01 - tolvaptan ; Belongs to the class of vasopressin antagonists. Used as diuretics.