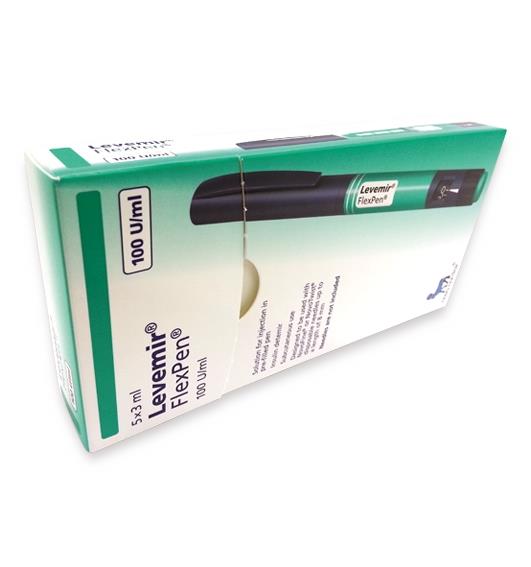 The duration of action is up to 24 hours depending on dose providing an opportunity for once or twice daily administration. If administered twice daily, steady state will occur after 2-3 dose administrations. For doses in the interval of 0.2-0.4 U/kg, Levemir exerts more than 50% of its maximum effect from 3-4 hours and up to approximately 14 hours after dose administration.
Dose proportionality in pharmacodynamic response (maximum effect, duration of action, total effect) is observed after subcutaneous administration.
Lower day-to-day variability in FPG was demonstrated during treatment with Levemir compared to NPH in long-term clinical trials.
Studies in patients with type 2 diabetes treated with basal insulin in combination with oral antidiabetic medicinal products demonstrated that glycaemic control (HbA1c) with Levemir is comparable to NPH insulin and insulin glargine and associated with less weight gain, see Table 2 as follows. In the study versus insulin glargine, Levemir was allowed to be administered once or twice daily whereas insulin glargine was to be administered once a day, 55% of the Levemir treated patients completed the 52 weeks of treatment on the twice daily regimen. (See Table 2.)

In trials investigating the use of oral antidiabetic medicinal products, combination therapy with Levemir resulted in a 61-65% lower risk of minor nocturnal hypoglycaemia compared to NPH insulin.
An open-label randomised clinical trial in patients with type 2 diabetes not reaching target with oral antidiabetic medicinal products was conducted.The trial started with a 12 week run-in period with liraglutide+metformin, where 61% reached an HbA1c <7%. The 39% of patients not achieving target were randomised to have Levemir once-daily added or continue on liraglutide+metformin for 52 weeks. Addition of Levemir provided a further reduction of HbA1c from 7.6% to 7.1% after 52 weeks. There were no major hypoglycaemic episodes. A major hypoglycaemic episode is defined as an episode where the subject was not able to treat him/herself and if glucagon or i.v. glucose was needed. See Table 3.

A 26 week, double blind, randomised clinical trial was conducted to investigate the efficacy and safety of adding liraglutide (1.8 mg) vs. placebo in patients with type 2 diabetes inadequately controlled on basal insulin with or without metformin. The insulin dose was reduced by 20% for patients with baseline HbA1c ≤8.0% in order to minimise the risk of hypoglycaemia. Subsequently, patients were allowed to up-titrate their insulin dose to no higher than the pre-randomisation dose. Levemir was the basal insulin product for 33% (N = 147) of the patients (97.3% using metformin). In these patients, addition of liraglutide resulted in a greater decline in HbA1c compared to addition of placebo (to 6.93% vs. to 8.24%), a greater decline in fasting plasma glucose (to 7.20 mmol/l vs. to 8.13 mmol/l), and a greater decline in body weight (-3.47 kg vs. -0.43 kg). Baseline values for these parameters were similar in the two groups. Observed rates of minor hypoglycaemic episodes were similar and no severe hypoglycaemic episodes were observed in either group. In long-term trials in patients with type 1 diabetes receiving a basal-bolus insulin therapy, fasting plasma glucose was improved with Levemir compared with NPH insulin. Glycaemic control (HbA1c) with Levemir was comparable to NPH insulin, with a lower risk of nocturnal hypoglycaemia and no associated weight gain.
In clinical trials using basal bolus insulin therapy, the overall rates of hypoglycaemia with Levemir and NPH insulin were similar. Analyses of nocturnal hypoglycaemia in patients with type 1 diabetes showed a significantly lower risk of minor nocturnal hypoglycaemia (able to self-treat and confirmed by capillary blood glucose less than 2.8 mmol/l or 3.1 mmol/l if expressed as plasma glucose) than with NPH insulin, whereas no difference was seen in type 2 diabetes.
Antibody development has been observed with the use of Levemir. However, this does not appear to have any impact on glycaemic control.
Pregnancy: Levemir was studied in an open-label randomised controlled clinical trial pregnant women with type 1 diabetes (n=310) were treated in a basal-bolus treatment regimen with Levemir (n=152) or NPH insulin (n=158) as basal insulin, both in combination with NovoRapid (see Use in Pregnancy & Lactation). Levemir was non-inferior to NPH insulin as measured by HbA1c at gestational week (GW) 36, and the reduction in mean HbA1c through pregnancy was similar, see Table 4.

Paediatric population: The efficacy and safety of Levemir has been studied for up to 12 months, in three randomised controlled clinical trials in adolescents and children (n=1045 in total); the trials included in total 167 children aged 1-5 years. The trials demonstrated that glycaemic control (HbA1c) with Levemir is comparable to NPH insulin and insulin degludec when given as basal-bolus therapy, using a noninferiority margin of 0.4%. In the trial comparing Levemir vs insulin degludec, the rate of hyperglycaemic episodes with ketosis was significantly higher for Levemir, 1.09 and 0.68 episodes per patient-year of exposure, respectively. Less weight gain (SD score, weight corrected for gender and age) was observed with Levemir than with NPH insulin.
The trial including children above 2 years was extended for an additional 12 months (total of 24 months treatment data) to assess antibody formation after long-term treatment with Levemir. After an increase in insulin antibodies during the first year, the insulin antibodies decreased during the second year to a level slightly higher than pre-trial level.
Results indicate that antibody development had no negative effect on glycaemic control and Levemir dose.
Efficacy and safety data for adolescent patients with type 2 diabetes mellitus have been extrapolated from data for children, adolescent and adult patients with type 1 diabetes mellitus and adult patients with type 2 diabetes mellitus. Results support the use of Levemir in adolescent patients with type 2 diabetes mellitus.
Pharmacokinetics: Absorption: Maximum serum concentration is reached between 6 and 8 hours after administration. When administered twice daily, steady state serum concentrations are reached after 2-3 dose administrations. Within-patient variation in absorption is lower for Levemir than for other basal insulin preparations. The absolute bioavailability of insulin detemir when administered subcutaneous is approximately 60%.
Distribution: An apparent volume of distribution for Levemir (approximately 0.1 l/kg) indicates that a high fraction of insulin detemir is circulating in the blood.The results of the in vitro and in vivo protein binding studies suggest that there is no clinically relevant interaction between insulin detemir and fatty acids or other protein bound medicinal products.
Biotransformation: Degradation of insulin detemir is similar to that of human insulin; all metabolites formed are inactive.
Elimination: The terminal half-life after subcutaneous administration is determined by the rate of absorption from the subcutaneous tissue. The terminal half-life is between 5 and 7 hours depending on the dose.
Linearity: Dose proportionality in serum concentrations (maximum concentration, extent of absorption) is observed after subcutaneous administration in the therapeutic dose range.
No pharmacokinetic or pharmacodynamic interactions were observed between liraglutide and Levemir when administering a single dose of Levemir 0.5 U/kg with liraglutide 1.8 mg at steady state in patients with type 2 diabetes.
Special populations: Older people (≥ 65 years old): There was no clinically relevant difference in pharmacokinetics of Levemir between older and young subjects.
Renal and hepatic impairment: There was no clinically relevant difference in pharmacokinetics of Levemir between subjects with renal or hepatic impairment and healthy subjects. As the pharmacokinetics of Levemir has not been studied extensively in these populations, it is advised to monitor plasma glucose closely in these populations.
Gender: There are no clinically relevant differences between genders in pharmacokinetic properties of Levemir.
Paediatric population: The pharmacokinetic properties of Levemir were investigated in young children (1-5 years), children (6-12 years) and adolescents (13-17 years) and compared to adults with type 1 diabetes. There were no clinically relevant differences in pharmacokinetic properties between young children, children, adolescents and adults.
Toxicology: Preclinical safety data: Non-clinical data reveal no special hazard for humans based on conventional studies of safety pharmacology, repeated dose toxicity, genotoxicity and toxicity to reproduction and development. Receptor affinity data and in vitro mitogenicity tests revealed no evidence of an increased mitogenic potential compared to human insulin.
Indications/Uses
Levemir is indicated for treatment of diabetes mellitus in adults, adolescents and children aged 1 year and above.
Dosage/Direction for Use
Posology: The potency of insulin analogues, including insulin detemir, is expressed in units, whereas the potency of human insulin is expressed in international units. 1 unit insulin detemir corresponds to 1 international unit of human insulin.
Levemir can be used alone as the basal insulin or in combination with bolus insulin. It can also be used in combination with oral antidiabetic medicinal products and/or GLP-1 receptor agonists.
When Levemir is used in combination with oral antidiabetic medicinal products or when added to GLP-1 receptor agonists it is recommended to use Levemir once daily, initially at a dose of 0.1-0.2 units/kg or of 10 units in adult patients.
The dose of Levemir should be titrated based on the individual patient's needs.
When a GLP-1 receptor agonist is added to Levemir, it is recommended to reduce the dose of Levemir by 20% to minimise the risk of hypoglycaemia. Subsequently, dosage should be adjusted individually.
For individual dose adjustments, the following two titration guidelines are recommended for adults: See Tables 5 and 6.