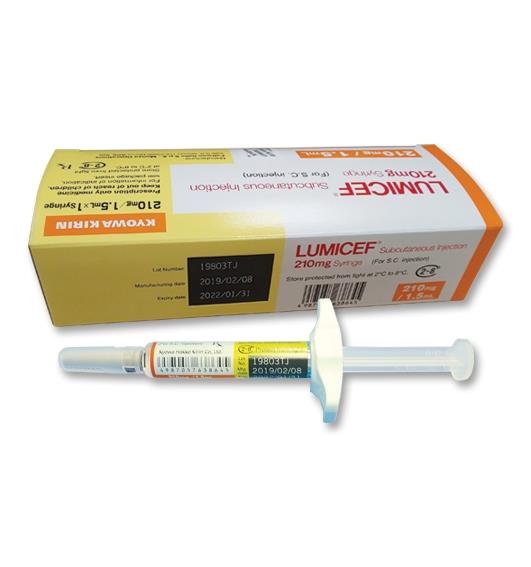 Non-Japanese Double-blind Comparative Studies (subjects with plaque psoriasis): A randomized, placebo- and ustekinumab-controlled, double-blind, parallel-group comparative study was conducted in subjects with moderate to severe plaque psoriasis (with plaque lesions covering ≥ 10% BSA and a PASI score of ≥ 12). Subjects received either placebo or brodalumab at 210 mg by subcutaneous injection at Weeks 0, 1, and 2 and at 2-week intervals thereafter for 12 weeks, with the brodalumab treatment continuing up to Week 52.
Moreover, ustekinumab (45 mg for those weighing ≤ 100 kg and 90 mg for those weighing > 100 kg) was subcutaneously administered at Weeks 0, 4, 16, 28, and 40. As shown in the table as follows, the percentages of those achieving a PASI 75/100 response after 12 weeks of treatment were significantly higher in the brodalumab-treated group than those in either the placebo or the ustekinumab group. (See Table 2.)

Incidences of malignant tumors (Non-Japanese clinical studies): In the non-Japanese clinical studies conducted in subjects with plaque psoriasis, the incidence of malignant tumors (excluding nonmelanoma skin cancers, the same hereafter) among 4,461 subjects (5,574.01 subject-years) treated with brodalumab was 0.4 per 100 subject-years (23 of 4,461 subjects). The malignant tumors included prostate cancer and adenocarcinoma pancreas, among other tumors. The incidence of malignant tumors was similar to that expected in the general population (standardized incidence rate, 0.91 [95% CI: 0.58, 1.37]). The incidence of nonmelanoma skin cancers was 0.5 per 100 subject-years (28 of 4,461 subjects).
* The approved dose of LUMICEF is 210 mg per dose (see DOSAGE & ADMINISTRATION).
Pharmacokinetics: Serum Concentrations: Single dose: The time courses of serum concentration and pharmacokinetic parameters in healthy Japanese adults after a single subcutaneous dose of brodalumab at 70, 140, 210, or 420 mgNote) are as follows. Cmax and AUC0-t increased more than dose-proportionally, indicating that brodalumab has a nonlinear pharmacokinetic profile. (See figure and Table 3.)

Repeated doses: The Weeks 8 to 10 pharmacokinetic parameters in Japanese subjects with moderate to severe plaque psoriasis who received brodalumab subcutaneously at 70, 140, or 210 mgNote) as the initial dose, once every week up to Week 2, and once every 2 weeks thereafter are as follows. (See Table 4.)

View ADR Monitoring Form
Caution For Usage
Precautions concerning Use: Route of administration: Use LUMICEF only by subcutaneous administration.
Administration: Before use, remove from the refrigerator and return to room temperature.
Do not inject areas of the skin that are sensitive or abnormal (scratch, redness, sclerosis, thickness, scaling, or other abnormalities), or sites of psoriasis.
It is recommended to administer the injection to the thigh, abdomen, or upper arm. Avoid repeated injections to the same site; use a different injection site for each injection.
LUMICEF is a single-use formulation; never reuse.
PRECAUTIONS FOR HANDLING: To avoid light exposure, store LUMICEF in its outer box. Moreover, continue to store protected from light even after the outer box has been opened.
Use immediately after opening the blister pack.
Storage
Store protected from light at 2°C to 8°C.
MIMS Class
Immunosuppressants
ATC Classification
L04AC12 - brodalumab ; Belongs to the class of interleukin inhibitors. Used as immunosuppressants.