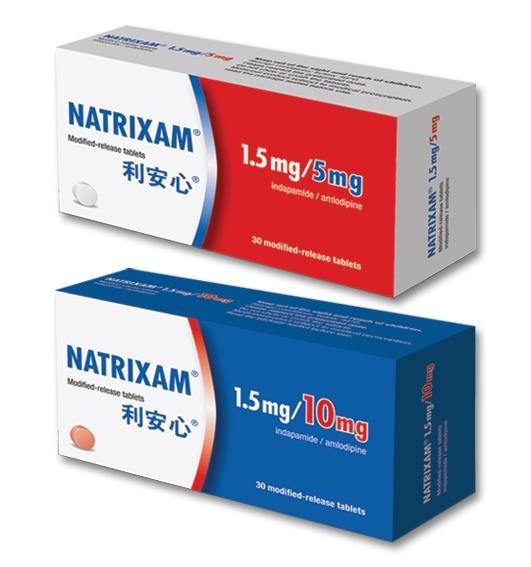 Exceptional cases of extrapyramidal syndrome have been reported with amlodipine.
Reporting of suspected adverse reactions: Reporting suspected adverse reactions after authorisation of the medicinal product is important. It allows continued monitoring of the benefit/risk balance of the medicinal product. Healthcare professionals are asked to report any suspected adverse reactions via adr@dh.gov.hk.
View ADR Monitoring Form
Drug Interactions
Linked to indapamide: Combinations that are not recommended: Lithium: Increased plasma lithium with signs of overdose, as with a salt-free diet (decreased urinary lithium excretion). However, if the use of diuretics is necessary, careful monitoring of plasma lithium and dose adjustment are required.
Combinations requiring precautions for use: Torsades de pointes-inducing medicines: class Ia antiarrhythmics (quinidine, hydroquinidine, disopyramide), class III antiarrhythmics (amiodarone, sotalol, dofetilide, ibutilide), some antipsychotics: phenothiazines (chlorpromazine, cyamemazine, levomepromazine, thioridazine, trifluoperazine), benzamides (amisulpride, sulpiride, sultopride, tiapride) butyrophenones (droperidol, haloperidol); others: bepridil, cisapride, diphemanil, erythromycin IV, halofantrine, mizolastine, pentamidine, sparfloxacin, moxifloxacin, vincamine IV.
Increased risk of ventricular arrhythmias, particularly torsades de pointes (hypokalaemia is a risk factor).
Monitor for hypokalaemia and correct, if required, before introducing this combination. Clinical, plasma electrolytes and ECG monitoring.
Use substances which do not have the disadvantage of causing torsades de pointes in the presence of hypokalaemia.
N.S.A.I.Ds. (systemic route) including COX-2 selective inhibitors, high dose salicylic acid (≥ 3 g/day): Possible reduction in the antihypertensive effect of indapamide.
Risk of acute renal failure in dehydrated patients (decreased glomerular filtration). Hydrate the patient; monitor renal function at the start of treatment.
Angiotensin converting enzyme (A.C.E.) inhibitors: Risk of sudden hypotension and/or acute renal failure when treatment with an A.C.E. is initiated in the presence of pre-existing sodium depletion (particularly in patients with renal artery stenosis).
In hypertension, when prior diuretic treatment may have caused sodium depletion, it is necessary: either to stop the diuretic 3 days before starting treatment with the A.C.E. inhibitor, and restart a hypokalaemic diuretic if necessary; or give low initial doses of the A.C.E. inhibitor and increase the dose gradually.
In congestive heart failure, start with a very low dose of A.C.E. inhibitor, possibly after a reduction in the dose of the concomitant hypokalaemic diuretic.
In all cases, monitor renal function (plasma creatinine) during the first weeks of treatment with an A.C.E. inhibitor.
Other compounds causing hypokalaemia: amphotericin B (IV), gluco- and mineralo-corticoids (systemic route), tetracosactide, stimulant laxatives: Increased risk of hypokalaemia (additive effect).
Monitoring of plasma potassium and correction if required. Must be particularly borne in mind in case of concomitant digitalis treatment. Use non-stimulant laxatives.
Digitalis preparations: Hypokalaemia predisposing to the toxic effects of digitalis.
Monitoring of plasma potassium and ECG and, if necessary, adjust the treatment.
Baclofen: Increased antihypertensive effect.
Hydrate the patient; monitor renal function at the start of treatment.
Allopurinol: Concomitant treatment with indapamide may increase the incidence of hypersensitivity reactions to allopurinol.
Combinations to be taken into consideration: Potassium-sparing diuretics (amiloride, spironolactone, triamterene): Whilst rational combinations are useful in some patients, hypokalaemia or hyperkalaemia (particularly in patients with renal failure or diabetes) may still occur. Plasma potassium and ECG should be monitored and, if necessary, treatment reviewed.
Metformin: Increased risk of metformin induced lactic acidosis due to the possibility of functional renal failure associated with diuretics and more particularly with loop diuretics. Do not use metformin when plasma creatinine exceeds 15 mg/l (135 μmol/l) in men and 12 mg/l (110 μmol/l) in women.
Iodinated contrast media: In the presence of dehydration caused by diuretics, increased risk of acute renal failure, in particular when large doses of iodinated contrast media are used.
Rehydration before administration of the iodinated compound.
Imipramine-like antidepressants, neuroleptics: Antihypertensive effect and increased risk of orthostatic hypotension increased (additive effect).
Calcium (salts): Risk of hypercalcaemia resulting from decreased urinary elimination of calcium.
Ciclosporin, tacrolimus: Risk of increased plasma creatinine without any change in circulating ciclosporin levels, even in the absence of water/sodium depletion.
Corticosteroids, tetracosactide (systemic route): Decreased antihypertensive effect (water/sodium retention due to corticosteroids).
Linked to amlodipine: Dantrolene (infusion): In animals, lethal ventricular fibrillation and cardiovascular collapse are observed in association with hyperkalaemia after administration of verapamil and intravenous dantrolene. Due to risk of hyperkalaemia, it is recommended that the co-administration of calcium channel blockers such as amlodipine be avoided in patients susceptible to malignant hyperthermia and in the management of malignant hyperthermia.
Administration of amlodipine with grapefruit or grapefruit juice is not recommended as bioavailability may be increased in some patients resulting in increased blood pressure lowering effects.
CYP3A4 inhibitors: Concomitant use of amlodipine with strong or moderate CYP3A4 inhibitors (protease inhibitors, azole antifungals, macrolides like erythromycin or clarithromycin, verapamil or diltiazem) may give rise to significant increase in amlodipine exposure. The clinical translation of these pharmacokinetic variations may be more pronounced in the elderly. Clinical monitoring and dose adjustment may thus be required.
CYP3A4 inducers: There is no data available regarding the effect of CYP3A4 inducers on amlodipine. The concomitant use of CYP3A4 inducers (e.g., rifampicin, hypericum perforatum) may give a lower plasma concentration of amlodipine. Amlodipine should be used with caution together with CYP3A4 inducers.
Effects of amlodipine on other medicinal products: The blood pressure lowering effects of amlodipine adds to the blood pressure-lowering effects of other medicinal products with antihypertensive properties.
In clinical interaction studies, amlodipine did not affect the pharmacokinetics of atorvastatin, digoxin, warfarin or ciclosporin.
Simvastatin: Co-administration of multiple doses of 10 mg of amlodipine with 80 mg simvastatin resulted in a 77% increase in exposure to simvastatin compared to simvastatin alone. Limit the dose of simvastatin to 20 mg daily in patients on amlodipine.
Caution For Usage
Incompatibilities: Not applicable.
Storage
Blisters (Aluminium/Aluminium): store below 30 °C.
Do not throw away any medicines via wastewater or household waste. Ask the pharmacist how to throw away medicines no longer use. These measures will help protect the environment.
Shelf life: 2 years.
MIMS Class
Calcium Antagonists / Diuretics
ATC Classification
C08GA02 - amlodipine and diuretics ; Belongs to the class of calcium-channel blockers in combination with diuretics. Used in the treatment of cardiovascular diseases.

Click on icon to see table/diagram/image
on one face) x 30's.