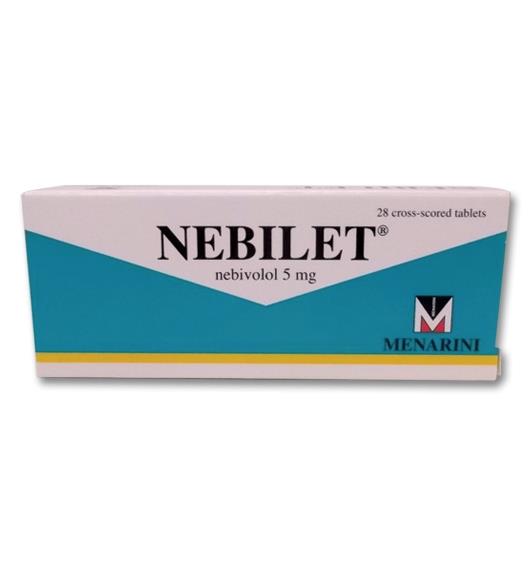 Concise Prescribing Info Full Prescribing Info Contents Description Action Indications/Uses Dosage/Direction for Use Overdosage Contraindications Special Precautions Use In Pregnancy & Lactation Adverse Reactions Drug Interactions Caution For Usage MIMS Class ATC Classification Regulatory Classification Presentation/Packing
Full Prescribing Info
Action
Pharmacotherapeutic group: Beta blocking agent, selective. ATC code: C07AB12.
Pharmacology: Pharmacodynamics: Nebivolol is a racemate of two enantiomers, SRRR-nebivolol (or d-nebivolol) and RSSS-nebivolol (or l-nebivolol). It combines two pharmacological activities: It is a competitive and selective beta-receptor antagonist: this effect is attributed to the SRRR-enantiomer (d-enantiomer).
It has mild vasodilating properties due to an interaction with the L-arginine/nitric oxide pathway.
Single and repeated doses of nebivolol reduce heart rate and blood pressure at rest and during exercise, both in normotensive subjects and in hypertensive patients. The antihypertensive effect is maintained during chronic treatment.
At therapeutic doses, nebivolol is devoid of alpha-adrenergic antagonism.
During acute and chronic treatment with nebivolol in hypertensive patients systemic vascular resistance is decreased. Despite heart rate reduction, reduction in cardiac output during rest and exercise may be limited due to an increase in stroke volume. The clinical relevance of these haemodynamic differences as compared to other beta1 receptor antagonists has not been fully established.
In hypertensive patients, nebivolol increases the NO-mediated vascular response to acetylcholine (ACh) which is reduced in patients with endothelial dysfunction.
In a mortality-morbidity, placebo-controlled trial performed in 2128 patients ≥ 70 years (median age 75.2 years) with stable chronic heart failure with or without impaired left ventricular ejection fraction (mean LVEF: 36 ± 12.3%, with the following distribution: LVEF less than 35% in 56% of patients, LVEF between 35% and 45% in 25% of patients and LVEF greater than 45% in 19% of patients) followed for a mean time of 20 months, nebivolol, on top of standard therapy, significantly prolonged the time to occurrence of deaths or hospitalisations for cardiovascular reasons (primary end-point for efficacy) with a relative risk reduction of 14% (absolute reduction: 4.2%). This risk reduction developed after 6 months of treatment and was maintained for all treatment duration (median duration: 18 months). The effect of nebivolol was independent of age, gender, or left ventricular ejection fraction of the population in study. The benefit on all cause mortality did not reach statistical significance in comparison with placebo (absolute reduction: 2.3%). A decrease in sudden death was observed in nebivolol-treated patients (4.1% vs 6.6%, relative reduction of 38%).
In vitro and in vivo experiments in animals showed that Nebivolol has no intrinsic sympathomimetic activity. In vitro and in vivo experiments in animals showed that at pharmacological doses nebivolol has no membrane stabilising action. In healthy volunteers, nebivolol has no significant effect on maximal exercise capacity or endurance.
Available preclinical and clinical evidence in hypertensive patients has not shown that nebivolol has a detrimental effect on erectile function.
Pharmacokinetics: Both nebivolol enantiomers are rapidly absorbed after oral administration. The absorption of nebivolol is not affected by food; nebivolol can be given with or without meals. Nebivolol is extensively metabolised, partly to active hydroxy-metabolites. Nebivolol is metabolised via alicyclic and aromatic hydroxylation, N-dealkylation and glucuronidation; in addition, glucuronides of the hydroxy-metabolites are formed. The metabolism of nebivolol by aromatic hydroxylation is subject to the CYP2D6 dependent genetic oxidative polymorphism. The oral bioavailability of nebivolol averages 12% in fast metabolisers and is virtually complete in slow metabolisers. At steady state and at the same dose level, the peak plasma concentration of unchanged nebivolol is about 23 times higher in poor metabolisers than in extensive metabolisers. When unchanged drug plus active metabolites are considered, the difference in peak plasma concentrations is 1.3 to 1.4 fold. Because of the variation in rates of metabolism, the dose of Nebilet should always be adjusted to the individual requirements of the patient: poor metabolisers therefore may require lower doses. In fast metabolisers, elimination half-lives of the nebivolol enantiomers average 10 hours. In slow metabolisers, they are 3-5 times longer. In fast metabolisers, plasma levels of the RSSS-enantiomer are slightly higher than for the SRRR-enantiomer. In slow metabolisers, this difference is larger. In fast metabolisers, elimination half-lives of the hydroxymetabolites of both enantiomers average 24 hours, and are about twice as long in slow metabolisers. Steady-state plasma levels in most subjects (fast metabolisers) are reached within 24 hours for nebivolol and within a few days for the hydroxy-metabolites.
Plasma concentrations are dose-proportional between 1 and 30 mg. The pharmacokinetics of nebivolol are not affected by age. In plasma, both nebivolol enantiomers are predominantly bound to albumin. Plasma protein binding is 98.1% for SRRR-nebivolol and 97.9% for RSSS-nebivolol. One week after administration, 38% of the dose is excreted in the urine and 48% in the faeces. Urinary excretion of unchanged nebivolol is less than 0.5% of the dose.
Toxicology: Preclinical safety data: Preclinical data reveal no special hazard for humans based on conventional studies of genotoxicity and carcinogenic potential.