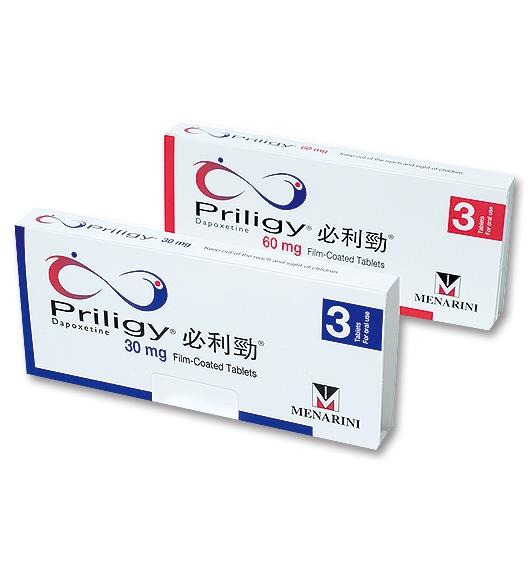 Concise Prescribing Info Full Prescribing Info Contents Description Action Indications/Uses Dosage/Direction for Use Overdosage Contraindications Special Precautions Use In Pregnancy & Lactation Adverse Reactions Drug Interactions Caution For Usage Storage MIMS Class ATC Classification Regulatory Classification Presentation/Packing
Full Prescribing Info
Contents
Dapoxetine HCl.
Description
Each film-coated tablet contains dapoxetine hydrochloride equivalent to 30 mg or 60 mg dapoxetine.
Excipient with known effect: Lactose.
Excipients/Inactive Ingredients: Tablet core: Lactose monohydrate, Microcrystalline cellulose, Croscarmellose sodium, Colloidal anhydrous silica, Magnesium stearate.
Tablet coating: Lactose monohydrate, Hypromellose, Titanium dioxide (E171), Triacetin, Iron Oxide Black (E172), Iron Oxide Yellow (E172).
Action
Pharmacotherapeutic group: Other Urologicals. ATC code: G04BX14.
Pharmacology: Pharmacodynamics: Mechanism of action: Dapoxetine is a potent selective serotonin reuptake inhibitor (SSRI) with an IC50 of 1.12 nM, while its major human metabolites, desmethyldapoxetine (IC50 < 1.0 nM) and didesmethyldapoxetine (IC50 = 2.0 nM) are equivalent or less potent (dapoxetine-N-oxide (IC50 = 282 nM)).
Human ejaculation is primarily mediated by the sympathetic nervous system. The ejaculatory pathway originates from a spinal reflex centre, mediated by the brain stem, which is influenced initially by a number of nuclei in the brain (medial preoptic and paraventricular nuclei).
The mechanism of action of dapoxetine in premature ejaculation is presumed to be linked to the inhibition of neuronal reuptake of serotonin and the subsequent potentiation of the neurotransmitter's action at pre- and postsynaptic receptors.
In the rat, dapoxetine inhibits the ejaculatory expulsion reflex by acting at a supraspinal level within the lateral paragigantocellular nucleus (LPGi). Post ganglionic sympathetic fibers that innervate the seminal vesicles, vas deferens, prostate, bulbourethral muscles and bladder neck cause them to contract in a coordinated fashion to achieve ejaculation. Dapoxetine modulates this ejaculatory reflex in rats.
Clinical efficacy and safety: The effectiveness of Priligy in the treatment of premature ejaculation has been established in five double-blind, placebo-controlled clinical trials, in which a total of 6081 subjects were randomized. Subjects were 18 years of age or older and had a history of PE in the majority of intercourse experiences in the 6-month period prior to enrolment. Premature ejaculation was defined according to the DSM-IV diagnostic criteria: short ejaculatory time (an intravaginal ejaculatory latency time [IELT; time from vaginal penetration to the moment of intravaginal ejaculation] of ≤ 2 minutes measured using a stopwatch in four studies), poor control over ejaculation, marked distress or interpersonal difficulty due to the condition.
Subjects with other forms of sexual dysfunction, including erectile dysfunction, or those using other forms of pharmacotherapy for the treatment of PE were excluded from all studies.
Results of all randomized studies were consistent. Efficacy was demonstrated after 12 weeks of treatment. One study enrolled patients both outside and within the EU and had a treatment duration of 24 weeks. In the study, 1162 subjects were randomized, 385 to placebo, 388 to Priligy 30 mg as needed, and 389 to Priligy 60 mg as needed. The mean and median Average IELT at study end are presented in Table 1 as follows and the cumulative distribution of subjects who achieved at least a specific level in Average IELT at study end are presented in Table 2 as follows. Other studies and pooled analysis of the data at Week 12 gave consistent results. (See Tables 1 and 2.)