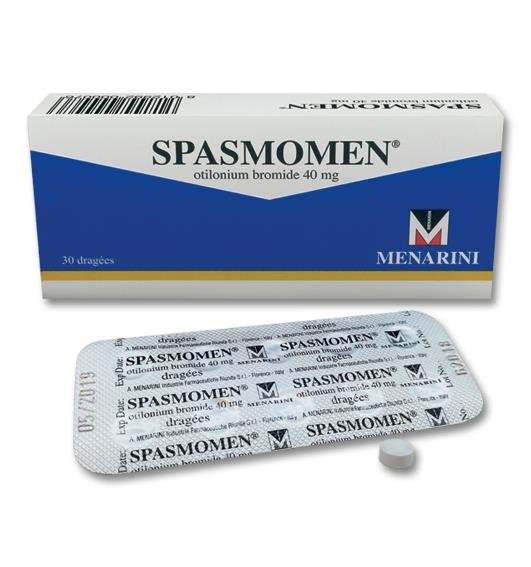 Concise Prescribing Info Full Prescribing Info Contents Description Action Indications/Uses Dosage/Direction for Use Overdosage Contraindications Special Precautions Use In Pregnancy & Lactation Adverse Reactions Drug Interactions Caution For Usage MIMS Class ATC Classification Regulatory Classification Presentation/Packing
Full Prescribing Info
Action
Pharmacotherapeutic group: synthetic anticholinergics, quaternary ammonium compounds. ATC code: A03AB06.
Pharmacology: Pharmacodynamics: Otilonium bromide has an intense spasmolytic action on the smooth muscles of the digestive tract.
Mechanism of action: SPASMOMEN mechanism of action is complex: otilonium bromide modifies Ca2+ fluxes from intracellular and extracellular sites and binds to the calcium channels Ca2+ and to the muscarinic receptors and tachykinin receptors. The combination of the blockage of calcium channels Ca2+ and the mild anti-muscarinic effects can explain the activity of otilonium bromide.
Pharmacokinetics: Pharmacokinetic studies have shown low systemic absorption of otilonium bromide by oral route (3%), and therefore plasma concentrations are very low.
A high distribution of the drug in the gastrointestinal smooth muscle has been described. Most fraction of the absorbed drug is excreted by the bile (95-97%).
Toxicology: Preclinical safety data: Acute toxicity: following oral administration, no mortality has been observed with up to 1500mg/kg in rats and up to 1000mg/kg in dogs.
Chronic toxicity: in experimental animals, oral otilonium bromide at a dose of 80mg/kg administered for 180 days did not cause any alterations in the haematochemical or histological tests.
Teratology: no embryotoxic or teratogenic effects have been observed in rats or rabbits, even up to doses of 60mg/kg.
Mutagenesis: no mutagenetic effects have been observed in the numerous tests performed.