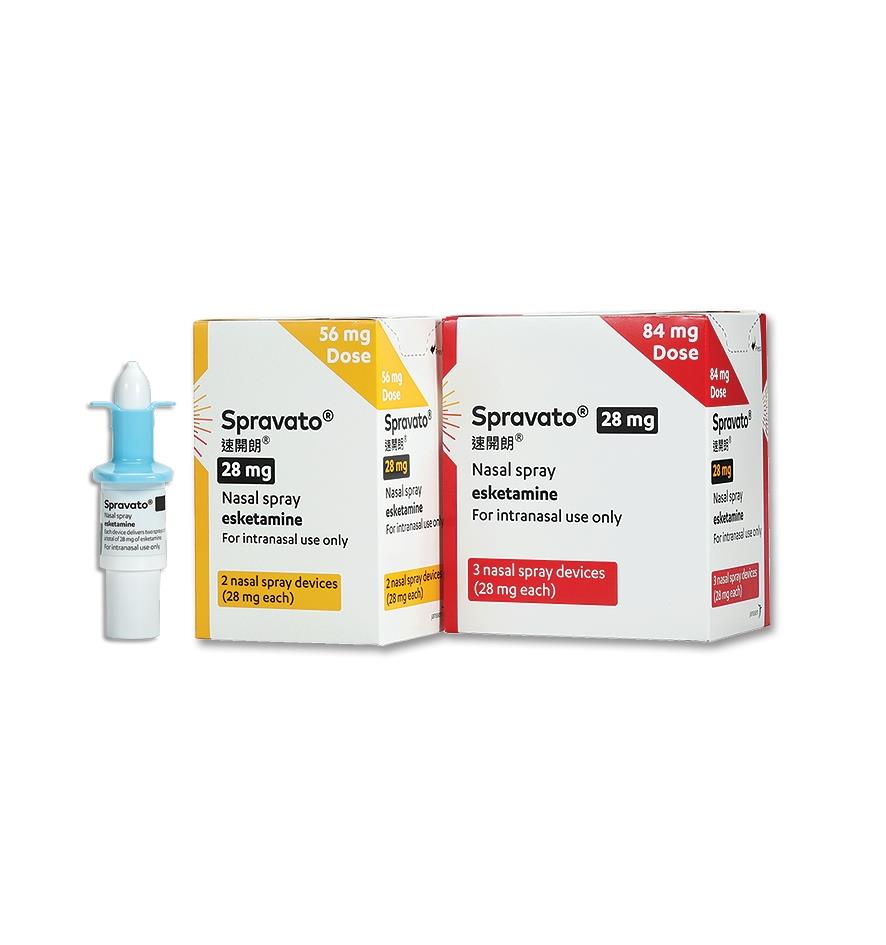 Description of selected adverse reactions: Dissociation: Dissociation (26%) was one of the most common psychological effects of esketamine. Other related terms included derealisation (1.9%), depersonalisation (1.7%), illusions (1.5%), and distortion of time (1.2%). These adverse reactions were reported as transient and self-limited and occurred on the day of dosing. Dissociation was reported as severe in intensity at the incidence of less than 4% across studies. Dissociation symptoms typically resolved by 1.5 hours post-dose and the severity tended to reduce over time with repeated treatments.
Sedation/somnolence: Adverse reactions of sedation (9.1%) and somnolence (18.0%) were primarily mild or moderate in severity, occurred on the day of dosing and resolved spontaneously the same day. Sedative effects typically resolved by 1.5 hours post-dose. Rates of somnolence were relatively stable over time during long-term treatment. In the cases of sedation, no symptoms of respiratory distress were observed, and haemodynamic parameters (including vital signs and oxygen saturation) remained within normal ranges.
Changes in blood pressure: In clinical trials, increases in systolic and diastolic blood pressure (SBP and DBP) over time were about 7 to 9 mmHg in SBP and 4 to 6 mmHg in DBP at 40 minutes post-dose and 2 to 5 mmHg in SBP and 1 to 3 mmHg in DBP at 1.5 hours post-dose in patients receiving Spravato plus oral antidepressants (see Precautions). The frequency of markedly abnormal blood pressure elevations of SBP (≥40 mmHg increase) ranged from 8% (<65 years) to 17% (≥65 years) and DBP (≥25 mmHg increase) ranged from 13% (<65 years) to 14% (≥65 years) in patients receiving esketamine plus oral antidepressant. The incidence of increased SBP (≥ 180 mmHg) was 3% and DBP (≥ 110 mmHg) was 4%.
Cognitive and memory impairment: Cognitive and memory impairment have been reported with long-term ketamine use or drug abuse. These effects did not increase over time and were reversible after discontinuing ketamine. In long-term clinical trials, the effect of esketamine nasal spray on cognitive functioning was evaluated over time and performance remained stable.
Urinary tract symptoms: Cases of interstitial cystitis have been reported with daily and long-term ketamine use at high doses. In clinical studies with esketamine, there were no cases of interstitial cystitis, however a higher rate of lower urinary tract symptoms was observed (pollakiuria, dysuria, micturition urgency, nocturia, and cystitis) in esketamine-treated patients compared with placebo-treated patients.
Reporting of suspected adverse reactions: Reporting suspected adverse reactions after authorisation of the medicinal product is important. It allows continued monitoring of the benefit/risk balance of the medicinal product. Healthcare professionals are asked to report any suspected adverse reactions.
View ADR Monitoring Form