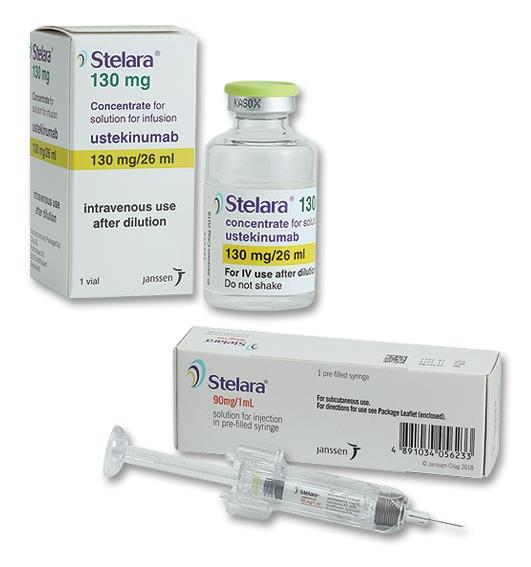 NEW Brand Resources
Concise Prescribing Info Full Prescribing Info Contents Description Action Indications/Uses Dosage/Direction for Use Overdosage Contraindications Special Precautions Use In Pregnancy & Lactation Adverse Reactions Drug Interactions Caution For Usage Storage MIMS Class ATC Classification Regulatory Classification Presentation/Packing Brand Resources
Full Prescribing Info
Drug Interactions
Live vaccines should not be given concurrently with STELARA (see Precautions).
No interaction studies have been performed in humans. In the population pharmacokinetic analyses of the phase III studies, the effect of the most frequently used concomitant medicinal products in patients with psoriasis (including paracetamol, ibuprofen, acetylsalicylic acid, metformin, atorvastatin, levothyroxine) on pharmacokinetics of ustekinumab was explored. There were no indications of an interaction with these concomitantly administered medicinal products. The basis for this analysis was that at least 100 patients (> 5% of the studied population) were treated concomitantly with these medicinal products for at least 90% of the study period. The pharmacokinetics of ustekinumab was not impacted by concomitant use of MTX, NSAIDs, 6-mercaptopurine, azathioprine and oral corticosteroids, or prior exposure to anti-TNFα agents, in patients with psoriatic arthritis or Crohn's disease.
The results of an in vitro study do not suggest the need for dose adjustments in patients who are receiving concomitant CYP450 substrates (see Pharmacology: Pharmacokinetics under Actions).
In psoriasis studies, the safety and efficacy of STELARA in combination with immunosuppressants, including biologics, or phototherapy have not been evaluated. In psoriatic arthritis studies, concomitant MTX use did not appear to influence the safety or efficacy of STELARA. In Crohn's disease studies, concomitant use of immunosuppressants or corticosteroids did not appear to influence the safety or efficacy of STELARA. (See Precautions.)