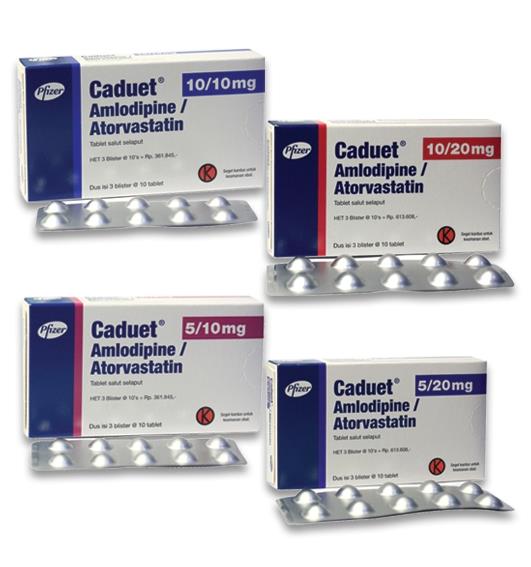 
In an open-label trial, 1220 patients with comorbid hypertension and dyslipidemia received elective dose titration with amlodipine/atorvastatin over a 14-week period. Patients were required to have uncontrolled BP to enter the trial (whether or not they were using antihypertensive medications at enrollment; patients were allowed to continue on previous antihypertensives, other than calcium channel blockers, during the 14-week dose titration period) but could enter with either controlled or uncontrolled LDL-C. As a result, no patient entered the trial with both BP and LDL-C controlled, and neither was controlled in 62% of patients. Treatment with amlodipine/atorvastatin reduced mean BP -17.1 mmHg systolic and -9.6 mmHg diastolic, and reduced mean LDL-C by -32.7%, resulting in control of both BP and LDL-C for 58% of these patients (controlled BP and LDL-C were defined, respectively, as <140/90 mmHg and <160 mg/dL for patients with comorbid hypertension and dyslipidemia only; <140/90 mmHg and <130 mg/dL for patients with comorbid hypertension and dyslipidemia plus 1 additional cardiovascular risk factor, excluding known CHD or diabetes mellitus; and <130/85 mmHg and <100 mg/dL for patients with comorbid hypertension and dyslipidemia plus known CHD, diabetes mellitus, or other atherosclerotic disease). Only 13% of the patients in this trial used amlodipine/atorvastatin as initial therapy for comorbid hypertension and dyslipidemia, whereas the amlodipine component of amlodipine/atorvastatin comprised add-on therapy for hypertension in 56% of patients, including patients for whom the atorvastatin component of amlodipine/atorvastatin comprised initial therapy for dyslipidemia (20%), a substitution for atorvastatin taken previously (18%), or a switch from another statin (18%). When evaluated according to the use of antihypertensive and lipid-lowering medications at enrollment, results showed that both BP and LDL-C were brought under control for 65% of patients who used amlodipine/atorvastatin as initial therapy for comorbid hypertension and dyslipidemia and for 55% to 64% of patients for whom the amlodipine component of amlodipine/atorvastatin constituted add-on therapy for hypertension (55% for such patients who had previously used lipid-lowering medications other than atorvastatin, 58% for such patients who had previously used atorvastatin, and 64% for such patients who had not previously used lipid-lowering medications).
Anglo-Scandinavian Cardiac Outcomes Trial: The Anglo-Scandinavian Cardiac Outcomes Trial (ASCOT) is a randomized 2x2 factorial design study comparing two antihypertensive regimens in a total of 19,342 patients (Blood Pressure Lowering arm - ASCOT-BPLA), as well as the effect of addition of 10 mg of atorvastatin compared to placebo in 10,305 patients (Lipid-Lowering arm - ASCOT-LLA) on fatal and non-fatal coronary events. There are 19,257 and 10,240 efficacy evaluable patients in ASCOT-BPLA and ASCOT-LLA, respectively.
In Anglo-Scandinavian Cardiac Outcomes Trial Blood Pressure Lowering Arm: The effect of treatment regimens based on amlodipine (5-10 mg) (n=9681) or atenolol (50-100 mg) (n=9661) was compared in a prospective randomized open blinded endpoint (PROBE) design in 19,342 hypertensive patients, ≥40 to <80 years of age with no previous MI or treatment for angina, at least three of the following predefined cardiovascular risk factors: male gender, age ≥55 years, smoking, Type 2 diabetes, history of CAD event occurring in a first-degree relative before the age of 55 years (males) or 60 years (females), total-C:HDL ≥6, peripheral vascular disease, left ventricular hypertrophy, prior cerebrovascular event, specific electrocardiogram (ECG) abnormalities, proteinuria/albuminuria.
To attain further BP goals (<140/90 mmHg for non-diabetic patients, <130/80 mmHg for diabetic patients), perindopril (4-8 mg) could be added to the amlodipine group and bendroflumethiazide potassium (1.25-2.5 mg) to the atenolol group. Third-line therapy was doxazosin gastrointestinal therapeutic system (GITS) (4-8 mg) in both arms.
The ASCOT-BPLA study was stopped prematurely after 903 primary events (non-fatal MI and fatal CHD) with median follow-up of 5.5 years due to significant benefit of the amlodipine-based regimen on the following secondary endpoints: all-cause mortality, cardiovascular (CV) mortality and stroke. The study had planned to need at least 1150 primary endpoints.
The primary endpoint of non-fatal MI + fatal CHD did not reach statistical significance when comparing the amlodipine-based group to the atenolol-based group. The secondary endpoints of total coronary events, all-cause mortality, fatal and non-fatal stroke were statistically significantly reduced when comparing amlodipine-based group to the atenolol-based group.
The incidence of the primary and secondary endpoints in the 19,257 efficacy evaluable patients: see Table 2.


Blood pressure (SBP/DBP) decreased significantly on both treatment regimens when compared to baseline (p-values <0.001). The SBP/DBP decreases from baseline were significantly more with the amlodipine-based regimen than with the atenolol-based regimen (-27.5/-17.7 mmHg vs. -25.7/- 15.6 mmHg, respectively), and the p-values on differences between the two groups were both <0.001 for SBP and DBP.
In Anglo-Scandinavian Cardiac Outcomes Trial Lipid-Lowering Arm: In the ASCOT-LLA, the effect of atorvastatin on fatal and non-fatal CHD was assessed in 10,305 hypertensive patients 40 to 80 years of age (mean of 63 years), without a previous MI and with TC levels <6.5 mmol/L (251 mg/dL). Additionally, all patients had at least three of the following cardiovascular risk factors: male gender, age >55 years, smoking, diabetes, history of CHD in a first-degree relative, TC:HDL >6, peripheral vascular disease, left ventricular hypertrophy, prior cerebrovascular event, specific ECG abnormality, proteinuria/albuminuria. In this double-blind, placebo-controlled study, patients were treated with antihypertensive therapy (goal BP <140/90 mmHg for non-diabetic patients, <130/80 mmHg for diabetic patients) and allocated to either atorvastatin 10 mg daily (n=5168) or placebo (n=5137). As the effect of atorvastatin treatment compared to placebo exceeded the significance threshold during an interim analysis, the ASCOT-LLA was terminated early at 3.3 years instead of 5 years. Additionally, BP was well controlled and similar in patients assigned to atorvastatin and placebo. These changes persisted throughout the treatment period.
Atorvastatin reduced the rate of the following events: see Table 3.


Hepatitis, jaundice and hepatic enzyme elevations have also been reported very infrequently (mostly consistent with cholestasis). Some cases severe enough to require hospitalization have been reported in association with use of amlodipine. In many instances, causal association is uncertain.
Rarely reported events were allergic reaction including pruritus, rash, angioedema, and erythema multiforme.
As with other calcium channel blockers, the following adverse events have been rarely reported and cannot be distinguished from the natural history of the underlying disease: MI, arrhythmia (including bradycardia, ventricular tachycardia and atrial fibrillation) and chest pain.
Pediatric Patients (Aged 6-17 years): Amlodipine is well tolerated in children. Adverse events were similar to those seen in adults. In a study of 268 children, the most frequently reported adverse events were: (see Table 8).