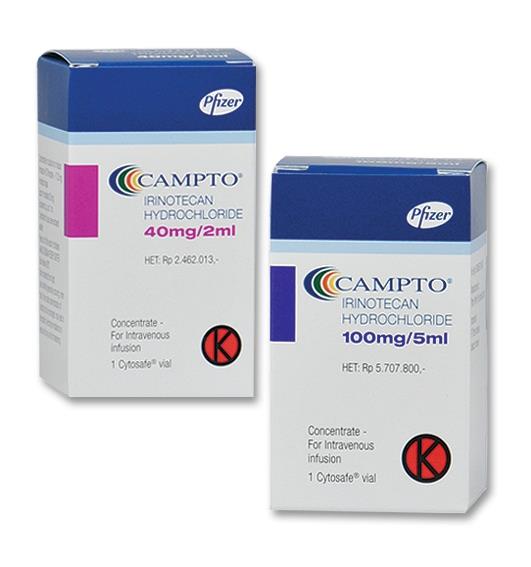 Concise Prescribing Info Bahasa Concise Prescribing Info Full Prescribing Info Contents Description Action Indications/Uses Dosage/Direction for Use Overdosage Contraindications Special Precautions Use In Pregnancy & Lactation Adverse Reactions Drug Interactions Caution For Usage Storage MIMS Class ATC Classification Regulatory Classification Presentation/Packing
The information highlighted (if any) are the most recent updates for this brand.
Full Prescribing Info
Contents
Irinotecan HCl trihydrate.
Description
The concentrate contains 20 mg/ml irinotecan hydrochloride trihydrate (equivalent to 17.33 mg/ml irinotecan).
The pH of the solution is adjusted to 3.5 with sodium hydroxide. Vials of CAMPTO contain 40 mg or 100 mg of irinotecan hydrochloride trihydrate.
Excipients/Inactive Ingredients: sorbitol, lactic acid and water for injections.
Action
Therapeutic class: Irinotecan hydrochloride is an antineoplastic agent of the topoisomerase I inhibitor class, clinically investigated as CPT-11. Irinotecan is a semisynthetic derivative of camptothecin, an alkaloid extract from plants, such as Camptotheca acuminata, or is chemically synthesized.
Pharmacology: Pharmacodynamics: Mechanism of action: Irinotecan and its active metabolite SN-38 bind to the topoisomerase I - DNA complex and prevent re-ligation of these single-strand breaks. Current research suggests that the cytotoxicity of irinotecan is due to double-strand DNA damage produced during DNA synthesis when replication enzymes interact with the ternary complex formed by topoisomerase I, DNA, and either irinotecan or SN-38.
Irinotecan serves as a water-soluble precursor of the lipophilic metabolite SN-38. SN-38 is formed from irinotecan by carboxylesterase-mediated cleavage of the carbamate bond between the camptothecin moiety and the dipiperidino side chain. SN-38 is approximately 1000 times as potent as irinotecan as an inhibitor of topoisomerase I purified from human and rodent tumor cell lines. In vitro cytotoxicity assays show that the potency of SN-38 relative to irinotecan varies from 2- to 2000-fold. However, the plasma area under the concentration versus time curve (AUC) values for SN-38 are 2% to 8% of irinotecan and SN-38 is 95% bound to plasma proteins compared to approximately 50% bound to plasma proteins for irinotecan. The precise contribution of SN-38 to the activity of irinotecan is thus unknown. Both irinotecan and SN-38 exist in an active lactone form and an inactive hydroxy acid anion form. A pH-dependent equilibrium exists between the two forms such that an acid pH promotes the formation of the lactone, while a more basic pH favors the hydroxy acid anion form.
Pharmacokinetics: Absorption and distribution: After intravenous infusion in humans, irinotecan plasma concentrations decline in a multiexponential manner, with a mean terminal elimination half-life of about 6 hours. The mean terminal elimination half-life of the active metabolite SN-38 is about 10 hours. The half-lives of the lactone (active) forms of irinotecan and SN-38 are similar to those of total irinotecan and SN-38, as the lactone and hydroxy acid forms are in equilibrium.
Over the dose range of 50 to 350 mg/m2, the AUC of irinotecan increases linearly with dose; the AUC of SN-38 increases less than proportionally with dose. Maximum concentrations of the active metabolite SN-38 are generally seen within 1 hour following the end of a 90-minute infusion of irinotecan.
Irinotecan exhibits moderate plasma protein binding (30% to 68% bound). SN-38 is highly bound to human plasma proteins (approximately 95% bound). The plasma protein to which irinotecan and SN-38 predominantly binds is albumin.
Metabolism & excretion: Irinotecan (CPT-11) is subject to extensive metabolic conversion by various enzyme systems, including esterases to form the active metabolite SN-38, and UGT1A1 mediating glucuronidation of SN-38 to form the inactive glucuronide metabolite SN-38G. Irinotecan (CPT-11) can also undergo CYP3A4-mediated oxidative metabolism to several pharmacologically inactive oxidation products, one of which can be hydrolyzed by carboxylesterase to release SN-38. UGT1A1 activity is reduced in individuals with genetic polymorphisms that lead to reduced enzyme activity, such as the UGT1A1*28 polymorphism (see Precautions). SN-38 glucuronide had 1/50 to 1/100 the activity of SN-38 in cytotoxicity assays using two cell lines in vitro. The disposition of irinotecan has not been fully elucidated in humans. The urinary excretion of irinotecan is 11% to 20%; SN-38, <1%; and SN-38 glucuronide, 3%. The cumulative biliary and urinary excretion of irinotecan and its metabolites (SN-38 and SN-38 glucuronide) over a period of 48 hours following administration of irinotecan in two patients ranged from approximately 25% (100 mg/m2) to 50% (300 mg/m2).
Pharmacokinetics in special populations: Geriatric: The pharmacokinetics of irinotecan administered using the weekly schedule was evaluated in a study of 183 patients that was prospectively designed to investigate the effect of age on irinotecan toxicity. Results from this trial indicate that there are no differences in the pharmacokinetics of irinotecan, SN-38, and SN-38 glucuronide in patients <65 years of age compared with patients ≥65 years of age. In a study of 162 patients that was not prospectively designed to investigate the effect of age, small (less than 18%) but statistically significant differences in dose-normalized irinotecan pharmacokinetic parameters in patients <65 years of age compared to patients ≥65 years of age were observed. Although dose-normalized AUC0-24 for SN-38 in patients ≥65 years of age was 11% higher than in patients <65 years of age, this difference was not statistically significant.
Gender: The pharmacokinetics of irinotecan do not appear to be influenced by gender.
Race: The influence of race on the pharmacokinetics of irinotecan has not been evaluated.
Hepatic Insufficiency: (see Dosage & Administration). Irinotecan clearance is diminished in patients with hepatic dysfunction while relative exposure to the active metabolite SN-38 is increased. The magnitude of these effects is proportional to the degree of liver impairment as measured by elevations in serum total bilirubin and transaminase concentrations.
Renal Insufficiency: (see Dosage & Administration). The influence of renal insufficiency on the pharmacokinetics of irinotecan has not been evaluated.
Toxicology: Preclinical safety data: The acute intravenous toxicity of irinotecan in animals is shown as follows. Lethality was observed after single intravenous irinotecan doses of approximately 111 mg/kg in mice and 73 mg/kg in rats (approximately 2.6 and 3.4 times the recommended human dose of 125 mg/m2, respectively). Death was preceded by cyanosis, tremors, respiratory distress, and convulsions. Subacute toxicity studies show that irinotecan affects tissues with rapid cell proliferation (bone marrow, intestinal epithelia, thymus, spleen, lymph nodes, and testes). (See Table 1.)


NCI Grade 3 or 4 adverse events reported in the clinical studies of the weekly and once-every-3-week-dosage schedules (N=620) are listed in Tables 5 to 7: (See Table 5, Table 6 and Table 7.)