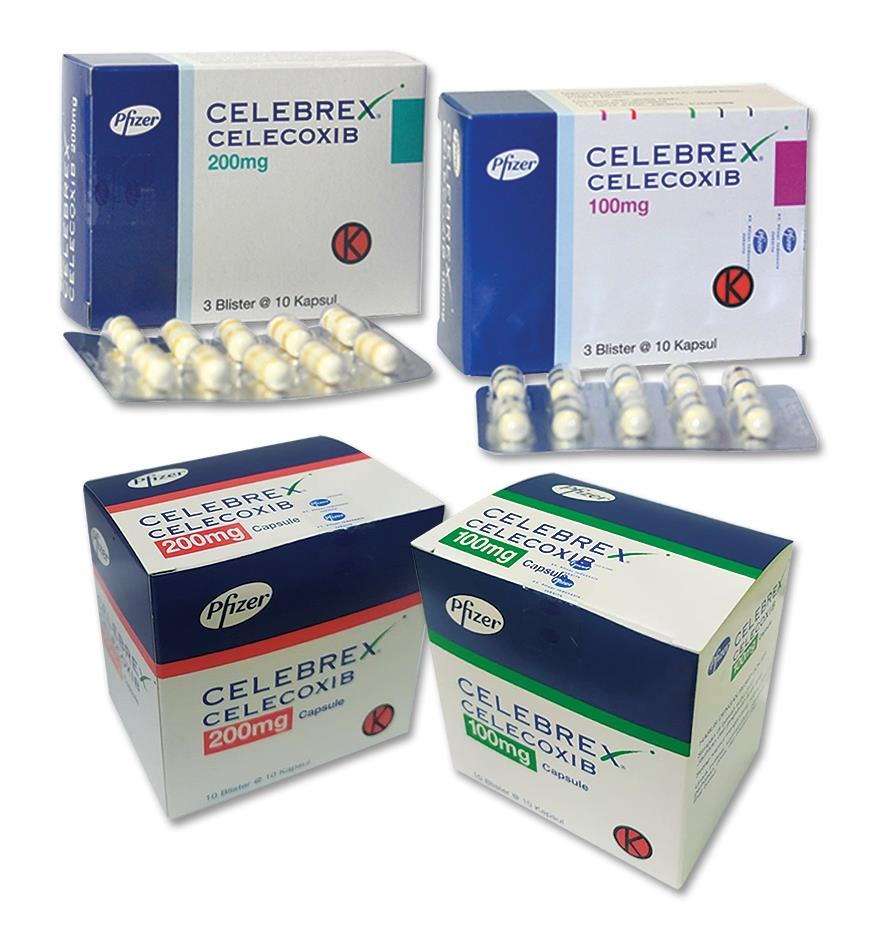 NEW Brand Resources
Concise Prescribing Info Bahasa Concise Prescribing Info Full Prescribing Info Contents Description Action Indications/Uses Dosage/Direction for Use Overdosage Contraindications Warnings Special Precautions Use In Pregnancy & Lactation Adverse Reactions Drug Interactions Caution For Usage Storage MIMS Class ATC Classification Regulatory Classification Presentation/Packing Brand Resources
The information highlighted (if any) are the most recent updates for this brand.
Full Prescribing Info
Contents
Celecoxib.
Description
CELEBREX (celecoxib) is chemically designated as 4-[5-(4-methylphenyl)-3-(trifluoromethyl)-1H-pyrazol-1-yl] benzenesulfonamide and is a diaryl substituted pyrazole.
The empirical formula for celecoxib is C17H14F3N3O2S, and the molecular weight is 381.38.
CELEBREX oral capsules contain 100 mg and 200 mg of celecoxib.
Excipients/Inactive Ingredients: croscarmellose sodium, edible inks, gelatin, lactose monohydrate, magnesium stearate, povidone, sodium lauryl sulfate and titanium dioxide.
Action
Pharmacology: Mechanism of Action: CELEBREX is a non-steroidal anti-inflammatory drug that exhibits anti-inflammatory, analgesic, and antipyretic activities in animal models. The mechanism of action of CELEBREX is believed to be due to inhibition of prostaglandin synthesis, primarily via inhibition of cyclooxygenase-2 (COX-2), and at therapeutic concentrations in humans, CELEBREX does not inhibit the cyclooxygenase-1 (COX-1) isoenzyme. In animal colon tumor models, celecoxib reduced the incidence and multiplicity of tumors.
Platelets: In clinical trials, CELEBREX at single doses up to 800 mg and multiple doses of 600 mg BID for up to 7 days duration (higher than recommended therapeutic doses) had no effect on platelet aggregation and bleeding time. Because of its lack of platelet effects, CELEBREX is not a substitute for acetyl salicylic acid for CV prophylaxis. It is not known if there are any effects of CELEBREX on platelets that may contribute to the increased risk of serious CV thrombotic adverse events associated with the use of CELEBREX.
Fluid Retention: Inhibition of PGE2 synthesis may lead to sodium and water retention through increased reabsorption in the renal medullary thick ascending loop of Henle and perhaps other segments of the distal nephron. In the collecting ducts, PGE2 appears to inhibit water reabsorption by counteracting the action of anti-diuretic hormone.
Pharmacokinetics: Absorption: Peak plasma levels of celecoxib occur approximately 3 hours after an oral dose. Under fasting conditions, both peak plasma levels (Cmax) and area under the curve (AUC) are roughly dose proportional up to 200 mg BID; at higher doses, there are less than proportional increases in Cmax and AUC (see Food Effects), which is thought to be due to the low solubility of the drug in aqueous media. Absolute bioavailability studies have not been conducted. With multiple dosing, steady-state conditions are reached on or before Day 5.
The pharmacokinetic parameters of celecoxib in a group of healthy subjects are shown in Table 1. (See Table 1.)


In a small number of patients with a history of ulcer disease, the complicated and symptomatic ulcer rates in patients taking CELEBREX alone or CELEBREX with ASA were, respectively, 2.56% (n = 243) and 6.85% (n = 91) at 48 weeks. These results are to be expected in patients with a prior history of ulcer disease (see Gastrointestinal (GI) Effects: Risk of GI Ulceration, Bleeding, and Perforation under WARNINGS and Safety Data from CLASS Study: Hematological Events under ADVERSE REACTIONS).
Celecoxib versus Omeprazole and Diclofenac for At-risk Osteoarthritis and Rheumatoid Arthritis Patients (CONDOR) Trial: In this prospective, 24-week study in patients with age ≥60 years or history of gastroduodenal ulcers (users of low-dose aspirin excluded), the percentage of patients with clinically significant GI events (composite primary endpoint) was lower in patients treated with celecoxib 200 mg twice daily compared to patients treated with diclofenac SR 75 mg twice daily plus omeprazole 20 mg once daily. This difference was driven by clinically significant decreases in hemoglobin (≥2 g/dL) and/or hematocrit (≥10%) of defined or presumed GI origin. Results for the individual components of this composite endpoint were as follows: See Table 3.


One randomized and double-blinded 6-month study in 430 RA patients was conducted in which an endoscopic examination was performed at 6 months. The results are shown in Figure 3. (See Figure 3.)


The following additional adverse drug reactions in Table 7 were identified with incidence rates greater than placebo in long-term polyp prevention studies of duration up to 3 years at daily doses from 400 mg up to 800 mg. (see Pharmacology: Clinical Studies: CV Safety: Long-Term Studies Involving Patients with Sporadic Adenomatous Polyps under Actions).
Frequencies of ADRs in Table 7 were determined based on these long-term polyp prevention studies and defined as: very common (≥10%), common (≥1% and <10%), uncommon (≥0.1% and <1%). The ADRs in Table 7 are listed by system organ class and ranked by frequency in descending order. (See Table 7.)