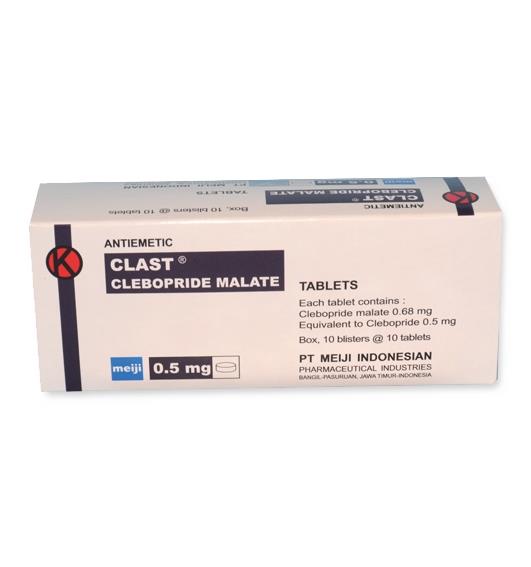 Concise Prescribing Info Bahasa Concise Prescribing Info Full Prescribing Info Contents Description Action Indications/Uses Dosage/Direction for Use Contraindications Special Precautions Use In Pregnancy & Lactation Side Effects Drug Interactions Storage MIMS Class ATC Classification Regulatory Classification Presentation/Packing
Full Prescribing Info
Action
Pharmacology: Clast has 3 fundamental pharmacological properties: Antiemetic, regulator of gastrointestinal motility and selective blocker of emotional stress. The therapeutic activity of Clast is exerted at 3 different levels: Clast re-establishes normal gastrointestinal motility by inhibiting the action of dopamine at the level of the plexuses of Meissner and Auerbach; the mechanism of action is based on the effects of increasing the blood flow of gastric mucosa and the acceleration of the gastric emptying movement; Clast's dopamine receptor-blocking action in the limbic system guarantees a selective blockade of emotional stress and a very favourable effect against the somatic symptoms of anxiety.
Pharmacokinetics: Clebopride is rapidly absorbed after oral administration and no accumulation is observed upon continuous administration.
Blood Level (Single Administration): Oral administration of 1 or 2 tablets of clebopride (0.5 or 1 mg as clebopride) to healthy adults resulted in a peak blood level after 1.5-1.6 hrs, with the mean concentration being 0.88 and 2.56 ng/mL, respectively. The serum half-lives were 36.5 hrs and 26.5 hrs, respectively.
Blood Level in Case of Continuous Administration: Using the formula for the simulation curve obtained by applying the 2-compartment model to the blood level after single administration of 1 tablet (clebopride 0.5 mg), the pattern of change in the blood level was obtained by integration when 1 tablet was administered 3 times daily for 5 consecutive days. The results showed that a steady state was maintained from around the 5th day after administration with no accumulation.
Clebopride does not influence drug-metabolizing enzyme activity of liver or metabolism of other drugs directly. Clebopride was administered in large doses to rats (25, 50 or 100 mg/kg); the weight of the liver, microsomal protein amount and the effect on hepatic drug-metabolizing enzymes were investigated.
As a result, in every dose group, no differences were observed from the control group for any of these parameters. It was, thus, confirmed that clebopride exerted no effect on the hepatic drug-metabolizing enzyme activities.