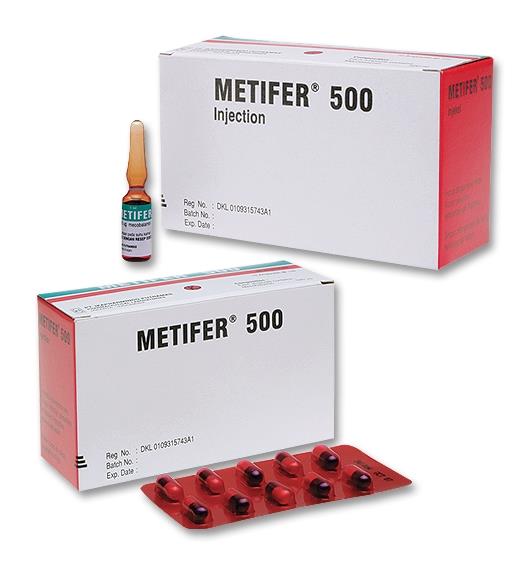 NEW Brand Resources
Concise Prescribing Info Bahasa Concise Prescribing Info Full Prescribing Info Contents Description Action Indications/Uses Dosage/Direction for Use Contraindications Special Precautions Adverse Reactions Drug Interactions Storage MIMS Class ATC Classification Regulatory Classification Presentation/Packing Brand Resources
Full Prescribing Info
Special Precautions
Capsule: If there is lack of satisfactory clinical response after a certain period of time, it is not necessary to continue use of the drug. Administering high doses of the drug for extended periods of time to patients with occupational exposure to mercury or its compounds is not recommended.
Injection: Because Mecobalamin is susceptible to photolysis, Metifer ampoules are packaged in the LPE pack (Light Protect Easy open pack). Metifer Injection should be used promptly after the package is opened, and caution should be taken so as not to expose the ampoules to direct light.
In intramuscular administration, caution should be exercised as suggested as follows to avoid adverse effects on tissues or nerves.
Repeated injection at the same site should be avoided. Particular care should be exercised when administering this drug to prematures, neonates, nursing infants and children.
The course of nerves should be avoided for the site of injection.
If the patient complains of pain or if blood reflux occurs when the syringe needle is stuck, withdraw it immediately and try a different site.
Metifer injection is supplied in one-point-cut ampoules. The cut point of the ampoules should be wiped with an alcohol swab before opening.
This drug should not be used over a period of months if there is lack of satisfactory clinical response in patients with megaloblastic anemia or with peripheral neuropathies probably due to vitamin B12 deficiency.