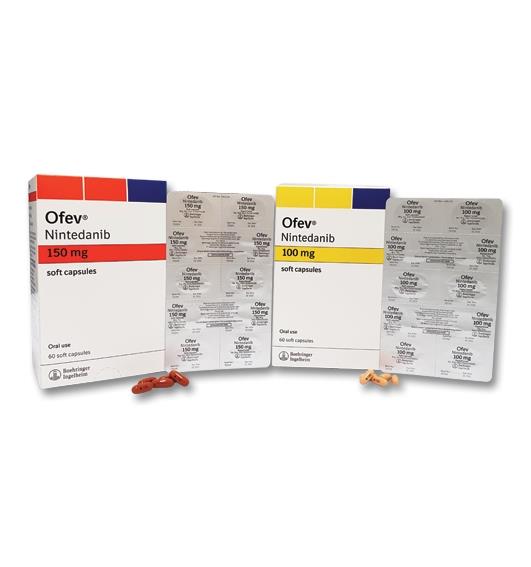 
The robustness of the effect of nintedanib in reducing the annual rate of decline in FVC was confirmed in all pre-specified sensitivity analyses.
In addition, similar effects were observed on other lung function endpoints e.g. change from baseline in FVC at week 52 and FVC responder analyses providing further substantiation of the effects of nintedanib on slowing disease progression. See Figure for the evolution of change from baseline over time in both treatment groups, based on the pooled analysis of studies INPULSIS-1 and INPULSIS-2.


FVC responder analysis: In both INPULSIS trials, the proportion of FVC responders, defined as patients with an absolute decline in FVC % predicted no greater than 5% (a threshold indicative of the increasing risk of mortality in IPF), was significantly higher in the nintedanib group as compared to placebo. Similar results were observed in analyses using a conservative threshold of 10%. See Table 2 for individual and pooled study results.


All adverse events of acute IPF exacerbation reported by the investigator were adjudicated by a blinded adjudication committee. A pre-specified sensitivity analysis of the time to first 'suspected' adjudicated acute IPF exacerbation was performed on the pooled data. The frequency of patients with at least 1 adjudicated exacerbation occurring within 52 weeks was lower in the nintedanib group (1.9% of patients) than in the placebo group (5.7% of patients). Time to event analysis of the adjudicated exacerbation events using pooled data yielded an HR of 0.32 (95% CI 0.16, 0.65; p=0.0010).This indicates that the risk of having a first acute IPF exacerbation was statistically significantly lower in the nintedanib group than in the placebo group at any time point.
Survival analysis: In the pre-specified pooled analysis of survival data of the INPULSIS trials, overall mortality over 52 weeks was lower in the nintedanib group (5.5%) compared with the placebo group (7.8%). The analysis of time to death resulted in a HR of 0.70 (95% CI 0.43, 1.12; p=0.1399). The results of all survival endpoints (such as on-treatment mortality and respiratory mortality) showed a consistent numerical difference in favour of nintedanib (see Table 5).

Drug Interactions
P-glycoprotein (P-gp): Nintedanib is a substrate of P-gp (see Pharmacology: Pharmacokinetics under Actions). Co-administration with the potent P-gp inhibitor ketoconazole increased exposure to nintedanib 1.61-fold based on AUC and 1.83-fold based on Cmax in a dedicated drug-drug interaction study.
In a drug-drug interaction study with the potent P-gp inducer rifampicin, exposure to nintedanib decreased to 50.3 % based on AUC and to 60.3 % based on Cmax upon co-administration with rifampicin compared to administration of nintedanib alone.
If co-administered with Ofev, potent P-gp inhibitors (e.g. ketoconazole or erythromycin) may increase exposure to nintedanib. In such cases, patients should be monitored closely for tolerability of nintedanib. Management of side effects may require interruption, dose reduction, or discontinuation of therapy with Ofev (see Dosage & Administration).
Potent P-gp inducers (e.g. rifampicin, carbamazepine, phenytoin, and St. John's Wort) may decrease exposure to nintedanib. Selection of an alternate concomitant medication with no or minimal P-gp induction potential should be considered.
Food: Ofev is recommended to be taken with food (see Pharmacology: Pharmacokinetics under Actions).
Cytochrome (CYP)-enzymes: Only a minor extent of the biotransformation of nintedanib consisted of CYP pathways. Nintedanib and its metabolites, the free acid moiety BIBF 1202 and its glucuronide BIBF 1202 glucuronide, did not jnhibit or induce CYP enzymes in preclinical studies (see Pharmacology: Pharmacokinetics under Actions). The likelihood of drug-drug interactions with nintedanib based on CYP metabolism is therefore considered to be low.
Co-administration with other drugs: The potential for interactions of nintedanib with hormonal contraceptives was not explored.
Caution For Usage
Special Precautions for Disposal: Any unused medicinal product or waste material should be disposed of in accordance with local requirement.
Storage
Store below 25°C, in a safe place, out of the reach of children.
Store in the original package in order to protect from moisture.
MIMS Class
Other Drugs Acting on the Respiratory System
ATC Classification
L01XE31 - nintedanib ; Belongs to the class of protein kinase inhibitors, other antineoplastic agents. Used in the treatment of cancer and other indications.