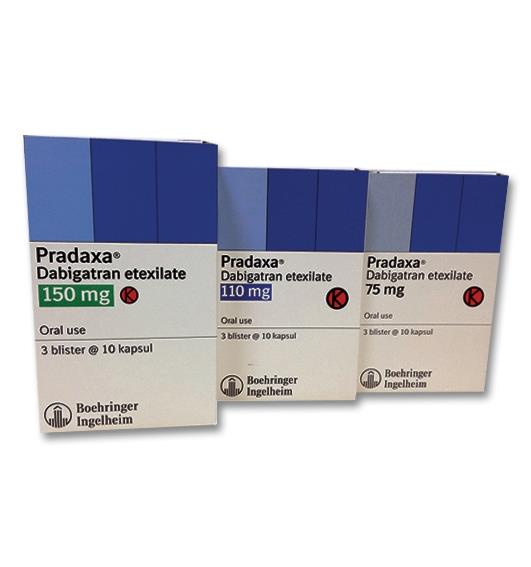 Concise Prescribing Info Bahasa Concise Prescribing Info Full Prescribing Info Contents Description Action Indications/Uses Dosage/Direction for Use Overdosage Contraindications Warnings Special Precautions Use In Pregnancy & Lactation Side Effects Drug Interactions Caution For Usage Storage MIMS Class ATC Classification Regulatory Classification Presentation/Packing
Full Prescribing Info
Special Precautions
Haemorrhagic risk: As with all anticoagulants, PRADAXA should be used with caution in conditions with an increased risk of bleeding. Bleeding can occur at any site during therapy with PRADAXA. An unexplained fall in hemoglobin and/or hematocrit or blood pressure should lead to a search for a bleeding site. Fatal bleeding may occur as with any anticoagulant, but there were fewer fatal bleeds with dabigatran etexilate than with warfarin in the RE-LY study. In this study of prevention of stroke and SEE in adult patients with nonvalvular atrial fibrillation, dabigatran etexilate was associated with higher rates of major gastrointestinal (GI) bleeding which was statistically significant for dabigatran etexilate 150 mg twice daily.
This increased risk was seen in the elderly (≥ 75 years) (seeTable 9 as follows).
Close clinical surveillance (looking for signs of bleeding or anaemia) is recommended throughout the treatment period, especially if risk factors are combined.
The following table summarises factors which may increase the haemorrhagic risk as identified in clinical studies (see Table 9).


PRADAXA treatment does not require anticoagulant monitoring. The INR test is unreliable in patients on PRADAXA and false positive INR elevations have been reported. Therefore INR tests should not be performed.
Tests of anticoagulant activity such as thrombin time (TT), ecarin clotting time (ECT) and activated partial thromboplastin time (aPTT) are available to detect excessive dabigatran activity.
Dabigatran related anticoagulation can be assessed by ECT or TT. If ECT or TT is not available, the aPTT test provides an approximation of PRADAXA's anticoagulant activity.
In atrial fibrillation patients in RE-LY treated with 150 mg bid an aPTT of greater than 2.0 - 3.0 fold of normal range at through was associated with an increased risk of bleeding.
Pharmacokinetic studies demonstrated an increase in drug exposure in patients with reduced renal function including age-related decline of renal function. PRADAXA is contraindicated in cases of severe renal impairment (CrCL < 30 mL/min). Patients who develop acute renal failure should discontinue PRADAXA.
Factors, such as decreased renal function (30 - 50mL/min CrCL), age ≥ 75 years, or strong P-gp-inhibitor comedication are associated with increased dabigatran plasma levels. The presence of one or more than one of these factors may increase the risk of bleeding (see Dosage & Administration).
The concomitant use of PRADAXA with the following treatments has not been studied and may increase the risk of bleeding: unfractionated heparins (except at doses necessary to maintain patency of central venous or arterial catheter) and heparin derivatives, low molecular weight heparins (LMWH), fondaparinux, desirudin, thrombolytic agents, GPIIb/IIIa receptor antagonists, ticlopidine, dextran, sulphinpyrazone rivaroxaban, prasugrel, vitamin K antagonists, and the P-gp inhibitors, itraconazole, tacrolismus, cyclosporine, ritonavir, tipranavir, nelfinavir and saquinavir.
The concomitant use of dronedarone increases exposure of dabigatran and is not recommended.
The concomitant use of ticagrelor increases the exposure to dabigatran and may show pharmacodynamic interaction, which may result in an increased risk of bleeding.
Bleeding risk may be increased in patients concomitantly treated with selective serotonin re-uptake inhibitors (SSRI) or selective serotonin norepinephrine re-uptake inhibitors (SNRIs).
Use of fibrinolytic agents for the treatment of acute ischemic stroke: The use of fibrinolytic agents for the treatment of acute ischemic stroke may be considered if the patient presents with a thrombin time (TT), or Ecarin clotting time (ECT), or activated partial thromboplastin time (aPTT) not exceeding the upper limit of normal (ULN) according to the local reference range.
In situations where there is an increased haemorrhagic risk (e.g. recent biopsy or major trauma, bacterial endocarditis) close observation (looking for signs of bleeding or anaemia) is generally required.
Prevention of Venous Thromboembolic Events in patients who have undergone elective total hip replacement surgery or total knee replacement surgery: NSAIDs given for short-term perioperative analgesia have been shown not to be associated with increased bleeding risk when given in conjunction with PRADAXA. There is limited evidence regarding the use of regular NSAID medication with half-lives of less than 12 hours during treatment with PRADAXA and this has not suggested additional bleeding risk.
Prevention of stroke and systemic embolism in patients with atrial fibrillation with at least one additional risk factor for stroke (i.e., previous ischemic stroke, transient ischemic attack [TIA], or systemic embolism; left ventricular dysfunction): Co-administration of anti-platelet (including ASA and clopidogrel) and NSAID therapies increase the risk of bleeding. Specifically, with concomitant intake of antiplatelets or strong P-gp inhibitors in patients aged ≥75 years, the risk of major bleeding, including gastrointestinal bleeding, increases. If bleeding is clinically suspected, appropriate measures such as testing for occult blood in stool, or testing for a drop in hemoglobin is suggested.
Interaction with P-gp inducers: The concomitant use of PRADAXA with the strong P-gp inducer rifampicin reduces dabigatran plasma concentrations. Other P-gp inducers such as St. John's Wort or carbamazepine are also expected to reduce dabigatran plasma concentrations, and should be co-administered with caution (see Interactions).
Surgery and Interventions: Patients on PRADAXA who undergo surgery or invasive procedures are at increased risk for bleeding. Therefore surgical interventions may require the temporary discontinuation of PRADAXA (see Pharmacology: Pharmacokinetics under Actions).
Preoperative Phase: Due to an increased risk of bleeding PRADAXA may be stopped temporarily in advance of invasive or surgical procedures. If possible, PRADAXA should be discontinued at least 24 hours before invasive or surgical procedures. In patients at higher risk of bleeding or in major surgery where complete hemostasis may be required consider stopping PRADAXA 2-4 days before surgery. Clearance of dabigatran in patients with renal insufficiency may take longer. This should be considered in advance of any procedures (see Table 10 and Pharmacology: Pharmacokinetics under Actions).
Table 10 summarizes discontinuation rules before invasive or surgical procedures (see Table 10).


PRADAXA is contraindicated in patients with severe renal dysfunction (CrCl <30 mL/min) but should this occur then PRADAXA should be stopped at least 5 days before major surgery.
If an acute intervention is required, PRADAXA should be temporarily discontinued. A surgery / intervention should be delayed if possible until at least 12 hours after the last dose. If surgery cannot be delayed there may be an increase in the risk of bleeding. This risk of bleeding should be weighed together with the urgency of intervention (for cardioversion see Dosage & Administration).
Spinal Anaesthesia/Epidural Anaesthesia/Lumbar Puncture: Procedures such as spinal anesthesia may require complete hemostatic function.
The risk of spinal or epidural haematoma may be increased in cases of traumatic or repeated puncture and by the prolonged use of epidural catheters. After removal of a catheter, an interval of at least 1 hour should elapse before the administration of the first dose of PRADAXA. These patients require frequent observation for neurological signs and symptoms of spinal or epidural hematoma.
Post Procedural Period: Resume treatment after complete haemostasis is achieved.
Effects on Ability to Drive and Use Machines: No studies on the effects on the ability to drive and use machines have been performed.