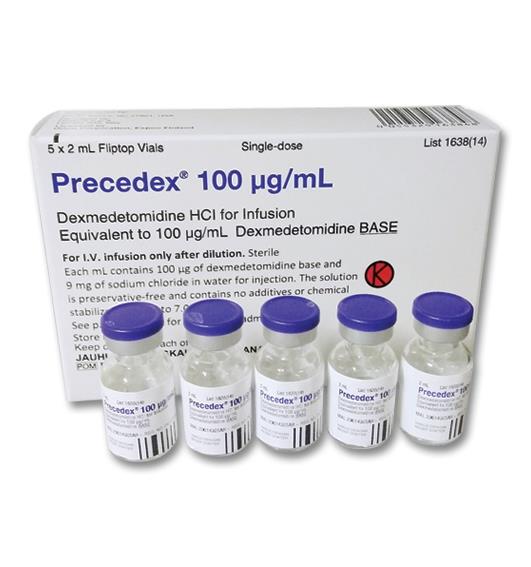 Concise Prescribing Info Bahasa Concise Prescribing Info Full Prescribing Info Contents Description Action Indications/Uses Dosage/Direction for Use Overdosage Contraindications Warnings Special Precautions Adverse Reactions Drug Interactions Storage MIMS Class ATC Classification Regulatory Classification Presentation/Packing
Full Prescribing Info
Special Precautions
Reports of bradycardia and hypotension have been associated with Precedex. If medical intervention is required, treatment may include increasing the rate of fluid administration, elevation of lower extremities or use of pressor agents. The IV administration of anticholinergics (eg, atropine) should be considered to modify vagal tone.
In addition, transient hypertension has been observed primarily during the loading dose, associated with initial peripheral vasoconstrictive effects of Precedex. If intervention is necessary, reduction of the loading infusion rate may be desirable.
Precedex should not be co-administered through the same IV catheter with blood or plasma because physical compatibility has not been established.
Based on the knowledge that dexmedetomidine hydrochloride is primarily metabolized in the liver, dose reduction should be considered in hepatically impaired patients.
Carcinogenicity, Mutagenicity & Impairment of Fertility: Animal carcinogenicity studies have not been performed with dexmedetomidine.
Dexmedetomidine HCl was not mutagenic in vitro, with or without metabolic activation, in either the bacterial reverse mutation assay (E. coli and Salmonella) or the mammalian cell forward mutation assay (mouse lymphoma).
There was no evidence of clastogenicity in the in vitro cytogenetics assay (human lymphocytes), with and without metabolic activation.
There was no evidence of clastogenicity in the in vivo mouse micronucleus test at doses as high as 250 mcg/kg (≥15 times the maximum recommended total daily human dose). There was evidence of clastogenic activity in the in vivo mouse micronucleus assay at a dose of 5000 mcg/kg, but this dose produced profound and sustained hypothermia that could have led to these results.
Dexmedetomidine did not affect reproductive capacity or fertility in male or female rats after daily SC administration as high as 54 mcg/kg/day for 70+ or 14+ days, respectively, approximately 3 times the maximum recommended human dose of 17.8 mcg/kg/day.
Dexmedetomidine did not affect reproductive capacity of fertility in the F1 generation of female rats receiving as much as 32 mcg/kg/day SC (gestation day 16 through postpartum day 25), approximately 2 times the maximum recommended human dose of 17.8 mcg/kg/day.
Use in pregnancy: Teratogenic effects were not observed following administration of dexmedetomidine at SC doses as high as 200 mcg/kg/day (gestation days 5-16) in rats or IV doses as high as 96 mcg/kg/day (gestation days 6-18) in rabbits. These doses are approximately 11 and 5 times the maximum recommended human dose of 17.8 mcg/kg/day, respectively.
Dexmedetomidine reduced fetal and pup body weights (18 and 54 mcg/kg/day SC, segment I; 200 mcg/kg/day, segment II), numbers of live pups/litter (18 and 54 mcg/kg/day, segment I), and increased post-implantation losses (200 mcg/kg/day, segment II) in rats. These findings are consistent with those of clonidine, another α2-adrenoreceptor agonist. Dexmedetomidine has no effect on fetal body weight at doses as high as 96 mcg/kg/day IV in rabbits (segment II).
Radiolabeled dexmedetomidine administered SC to female rats gestation day 18 crosses the placental barrier to fetal tissue.
There are no adequate and well-controlled studies in pregnant women. Precedex should be used during prenancy only if the potential benefits justify the potential risk to the fetus.
Labor and Delivery: The safety of Precedex in labor and delivery has not been studied and is, therefore, not recommended for obstetrics, including cesarean section deliveries.
Use in lactation: It is not known whether dexmedetomidine hydrchloride is excreted in human milk. Because many drugs are excreted in human milk, caution should be exercised when Precedex infusion is administered to a nursing woman. Radiolabeled dexmedetomidine administered SC to lactating female rats was distributed to, but did not accumulate in milk.
Use in children: Safety and efficacy of Precedex in children <18 years have not been studied.
Use in the elderly: The safety and efficacy of Precedex were not altered by age.