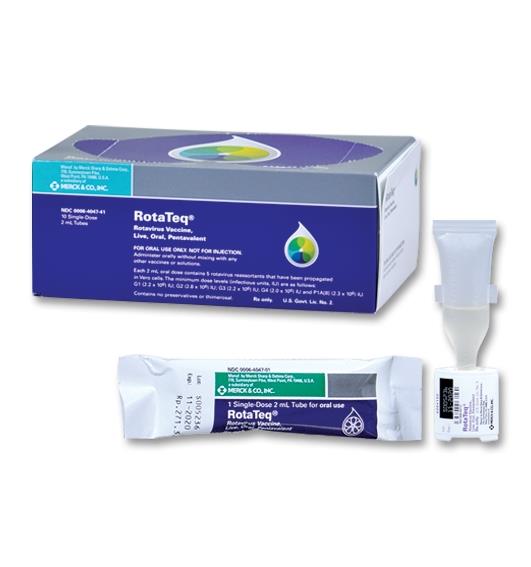 Concise Prescribing Info Bahasa Concise Prescribing Info Full Prescribing Info Contents Description Action Indications/Uses Dosage/Direction for Use Overdosage Contraindications Special Precautions Use In Pregnancy & Lactation Adverse Reactions Drug Interactions Caution For Usage Storage MIMS Class ATC Classification Regulatory Classification Presentation/Packing
Full Prescribing Info
Contents
Live, oral pentavalent rotavirus vaccine.
Description
Each 2-mL dose contains the following human-bovine rotavirus reassortants: G1, G2, G3, G4 and P1[8]. The minimum dose levels of the reassortants are: G1 2.2 x 106 infectious units, G2 2.8 x 106 infectious units, G3 2.2 x 106 infectious units, G4 2 x 106 infectious units and P1[8] 2.3 x 106 infectious units.
The reassortants are propagated in Vero cells using standard tissue culture techniques in the absence of antifungal agents.
The reassortants are suspended in a buffered stabilizer solution. Each vaccine dose also contains the following inactive ingredients: Sucrose, sodium citrate, monobasic sodium phosphate monohydrate, sodium hydroxide, polysorbate 80 and also culture media. There are no preservatives or thimerosal present.
Action
Pharmacology: The human rotavirus serotypes (G1, G2, G3, G4 and P1[8]) have been selected for RotaTeq because these strains caused over 90% of rotavirus disease in North America, Europe and Australia over 88% of rotavirus disease worldwide between 1973 and 2003.
Efficacy: The efficacy of RotaTeq was evaluated in 2 studies among infants who received the vaccine (n=3484) or placebo (n=3499). The 3rd dose was administered to infants as old as 32 weeks of age. Efficacy evaluations included efficacy against any severity (mild, moderate and severe) of rotavirus gastroenteritis and efficacy against severe rotavirus gastroenteritis. The effect on healthcare contacts for rotavirus gastroenteritis, including hospitalizations and emergency department visits (n=68,038), routine visits to a physician (n=5673) and work loss (n=68,038) was also evaluated in the rotavirus safety and efficacy trial (REST). Concomitant administration of other licensed childhood vaccines except for oral poliovirus vaccine (OPV) was permitted in all phase III studies.
Efficacy against any severity of gastroenteritis caused by naturally occurring rotavirus of the composite of the G serotypes (G1-G4) included in RotaTeq was 73.8% and efficacy against severe rotavirus gastroenteritis was 98.2% through the 1st rotavirus season after completion of vaccination. RotaTeq also provided protection against non-vaccine G serotypes. Based on limited data, the efficacy against any severity of gastroenteritis caused by the non-vaccine G serotype (G9) was 74.1%. The efficacy of RotaTeq through 2 rotavirus seasons after completion of vaccination against any severity of rotavirus gastroenteritis was 71.3%.
RotaTeq reduced the rate of hospitalizations, emergency department visits, non-urgent care visits and parent/legal guardian work loss days. Hospitalizations and emergency department visits were evaluated among 68,038 infants and non-urgent care visits were evaluated among 5673 infants for a maximum of 2 years after vaccination. The rate reductions were as follows: 94.5% for hospitalizations and emergency department visits (95.8% for hospitalizations and 93.7% for emergency department visits), 86% for non-urgent care visits and 86.6% for parent/legal guardian work loss days.
Efficacy of RotaTeq against rotavirus gastroenteritis through the 1st full rotavirus season after completion of vaccination and reduction in hospitalizations/emergency department visits for rotavirus gastroenteritis for up to 2 years postvaccination by G-serotype are shown in Table 1.


Kawasaki's disease was reported in the phase III clinical trials in <0.1% (5/36,150) of vaccine recipients and <0.1% (1/35,536) of placebo recipients within 42 days of any dose (not statistically significant).
In 11,711 infants (6138 recipients of RotaTeq) from the 3 studies, a Vaccination Report Card was used by parents/guardians to record the child's temperature and any episodes of diarrhea and vomiting on a daily basis during the 1st week following each vaccination. Table 2 summarizes the frequencies of these adverse events, regardless of cause. (See Table 3.)


Parents/guardians of the 11,711 infants were also asked to report the presence of other events on the vaccination report card for 42 days after each dose. The following vaccine-related adverse experiences were observed among recipients of RotaTeq at a frequency of at least 0.3% greater than that was observed among placebo recipients.
Very Common (≥1/10); common (≥1/100, <1/10); uncommon (≥1/1000, <1/100); rare (≥1/10,000, <1/1000); very rare (<1/10,000).
Infections and Infestations: Uncommon: Nasopharyngitis (0.6% vaccine recipients, 0.3% placebo recipients).
Gastrointestinal Disorders: Very Common: Diarrhea (17.6% vaccine recipients, 15.1% placebo recipients), vomiting (10.1% vaccine recipients, 8.2% placebo recipients).
General Disorders and Administration Site Conditions: Very Common: Pyrexia (20.9% vaccine recipients, 18.7% placebo recipients).
Other Adverse Events: Otitis media and bronchospasm occurred in more vaccine recipients than placebo recipients (14.5% vs 13% and 1.1% vs 0.7%, respectively) overall; however, among cases that were considered to be vaccine-related in the opinion of the study investigator, the incidence was the same for vaccine and placebo recipients for otitis media (0.3%) and bronchospasm (<0.1%).
Administration of other licensed vaccines was permitted in all studies. The safety of RotaTeq when administered concomitantly with prespecified licensed vaccines including Haemophilus influenzae type b and hepatitis B vaccine, diphtheria and tetanus toxoids and acellular pertussis (DTaP) vaccine, inactivated poliovirus vaccine (IPV), pneumococcal conjugate vaccine and hexavalent vaccines was evaluated in a phase III placebo-controlled study. In a subsequent controlled study, the safety of RotaTeq was well tolerated; the frequency of adverse experiences observed was generally similar to that seen in the control group.
Post-Marketing Reports: The following adverse experiences have been spontaneously reported during post-approval use of RotaTeq. Because these experiences were reported voluntarily from a population of uncertain size, it is not possible to reliably estimate their frequency or to establish a causal relationship to vaccine exposure.
Skin and Subcutaneous Tissue Disorders: Urticaria.
View ADR Monitoring Form
Drug Interactions
There are no known drug interactions. (See Use with Other Vaccines under Dosage & Administration.)
Caution For Usage
Instructions to Healthcare Provider: The healthcare provider should determine the current health status and previous vaccination history of the vaccine recipient.
The healthcare provider should question the parent or guardian about reactions to a previous dose of RotaTeq or other rotavirus vaccine.
Information for Parents/Guardians: The healthcare provider should provide the vaccine information required to be given with each vaccination to the parent or guardian.
The healthcare provider should inform the parent or guardian of the benefits and risks associated with vaccination, as well as the importance of completing the immunization series. For risks associated with vaccination, see Precautions and Adverse Reactions.
Parents or guardians should be instructed to report any adverse reactions to their healthcare provider.
Storage
Store and transport refrigerated at 2°-8°C. Protect from light.
RotaTeq should be administered as soon as possible after being removed from refrigeration. When out of refrigeration at room temperature at or below 25°C, administration may be delayed for up to 48 hrs. After this time, RotaTeq should be discarded in approved biological waste containers according to local regulations.
MIMS Class
Vaccines, Antisera & Immunologicals
ATC Classification
J07BH01 - rota virus, live attenuated ; Belongs to the class of rota virus diarrhea viral vaccines.