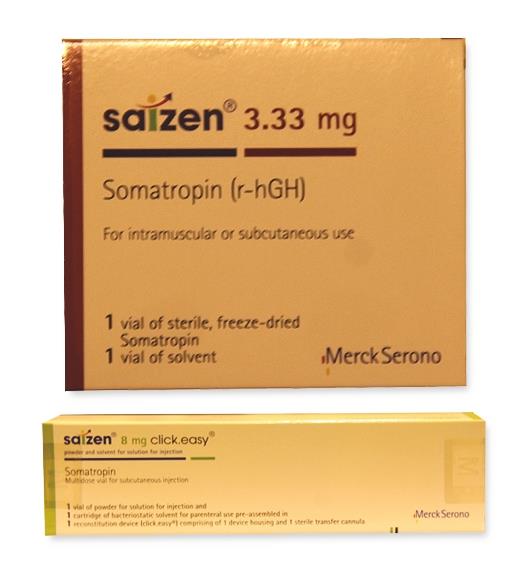 Concise Prescribing Info Bahasa Concise Prescribing Info Full Prescribing Info Contents Description Action Indications/Uses Dosage/Direction for Use Overdosage Contraindications Special Precautions Use In Pregnancy & Lactation Adverse Reactions Drug Interactions Caution For Usage Storage MIMS Class ATC Classification Regulatory Classification Presentation/Packing
Full Prescribing Info
Action
Pharmacology: Pharmacodynamics: The most important pharmacological effect resulting from the parenteral administration of somatropin is stimulation of the growth levels through the medium of the somatomedins or IGF. However, somatropin is active neither in the presence of stunted growth resulting from a deficiency of somatomedins or of their receptors, nor in patients of short stature due to pituitary deficiency, whose epiphyses are already closed.
Somatropin also exerts effects on protein metabolism (anabolic effect), glucose metabolism (alteration of the glucose tolerance) and lipid metabolism (lipolytic effect). In addition, somatropin modulates the activity of the hepatic cytochrome P-450 3A4.
Clinical Efficacy in the Case of Pronounced Growth Hormone Deficiency which Started in Infancy or in Adulthood: The effects of growth hormone deficiency in adults are influenced by Saizen as follows: In a pivotal, double-blind, placebo-controlled study in 115 patients, carried out over a period of 6 months the following parameters were observed: At the start of treatment, a dosage of 0.005 mg/kg daily was administered by SC injection. After 4 weeks of treatment, if the tolerability was good, the dosage was increased by 0.01 mg/kg daily.
Primary Endpoint: Change in the fat-free mass (measured by means of DEXA, dual energy X-ray absorptiometry): Statistically significant increase by an average of 2.23 kg. Men show a more pronounced increase than women.
Secondary Endpoint: Change in the total fatty mass (measured by means of DEXA): Average reduction by 2.3 kg in the recombinant human growth hormone (r-hGH) group, compared with 0.47 kg in the placebo group (statistically significant).
Cardiac Function: 2-dimensional echocardiography shows an average increase of the percentage ejection fraction by 5.05% in the r-hGH group, compared with 3.01% in the placebo group, and an average decrease of the left ventricular end-systolic volume by 4.29 mL in the r-hGH group, compared with 1.14 mL in the placebo group.
Quality of Life: Apart from a statistically significant improvement (by 11% in the r-hGH group) in the "emotional reactions" area (p=0.017), the results of the nottingham health profile questionnaire (mobility, sleep, energy, pain, social isolation) showed no improvement.
Physical Performance: Physical performance (measured on the basis of oxygen consumption on the treadmill) remained unchanged.
Bone Density: Bone density remained unchanged.
Clinical Efficacy in Case of Growth Hormone Deficiency in Children Born Small for their Gestational Age: In the course of clinical trials in prepubertal children of short stature who were born small for their gestational age, 3 years of treatment with the dosage of 0.067 mg/kg daily resulted in an average gain in height of +1.8 SDS.
Patients who did not receive any additional treatment maintained a gain in height of +0.7 SDS at their final height.
Patients who received a 2nd cycle of treatment after a period of observation showed a total gain in height of +1.3 SDS at their final height, after an average cumulative duration of treatment of 6.1 years.
A clinical trial evaluating 2 discontinuous treatment regimes, corresponding to a cumulative dosage of 0.033 mg/kg daily for 4 years, showed an acceleration of growth and a gain in height of +1.55 and +1.43 SDS, respectively, at the end of the trial.
The data on long-term safety are still limited.
Pharmacokinetics: After administration of a single dose of r-hGH in healthy volunteers, the maximum plasma concentration (tmax) is reached 3 hrs after IM injection, while it appears between 4 and 6 hrs after SC injection. The areas under the curves (AUC) are comparable for the 2 routes of administration. The tmax values correlate well with those for natural growth hormone, as published in the literature.
The pharmacokinetics of Saizen are linear up to a dose of 8 IU (2.67 mg). With higher doses (60 IU/20 mg), a certain degree of nonlinearity, although not clinically relevant, cannot be discounted.
After administration by IV injection in healthy volunteers, the distribution volume in the steady state is about 7 L, the total clearance is about 15 L/hr, while the renal clearance is negligible. The elimination half-life of Saizen is from 20-35 min.
After SC or IM injection of Saizen, the final half-life is distinctly longer, namely about 2-4 hrs; this is due to limitation of the rate of absorption.
The maximum serum concentrations of growth hormone are reached after approximately 4 hrs and the serum levels return to normal in 24 hrs; this indicates that there will be no accumulation of growth hormone in the course of repeated administration.
The absolute bioavailability, by the 2 routes of administration, is from 70-90%.
Exogenous human growth hormone follows the same route of metabolisation as the endogenous hormone: It is inactivated by proteases and is metabolized in the liver and the kidneys, following the routes of metabolization of the proteins. It is not recovered in the urine.
In patients suffering from chronic hepatic and/or renal insufficiency, the clearance of somatropin is reduced.
Toxicology: Preclinical Safety Data: Preclinical data based on conventional studies of the safety pharmacology, chronic toxicity and genotoxicity of Saizen reveal no special risk for humans.