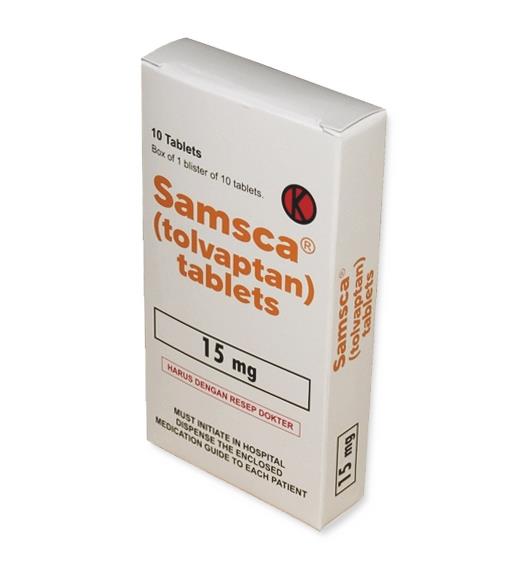 Concise Prescribing Info Bahasa Concise Prescribing Info Full Prescribing Info Contents Description Action Indications/Uses Dosage/Direction for Use Overdosage Contraindications Warnings Special Precautions Use In Pregnancy & Lactation Adverse Reactions Drug Interactions Storage MIMS Class ATC Classification Regulatory Classification Presentation/Packing
Full Prescribing Info
Contents
Tolvaptan.
Description
Each tablet also contains the following excipients: Corn starch, hydroxypropyl cellulose, lactose monohydrate, low-substituted hydroxypropyl cellulose, magnesium stearate and microcrystalline cellulose, and FD&C blue no. 2 aluminum lake as colorant.
Tolvaptan is (±)-4'-[(7-chloro-2,3,4,5-tetrahydro-5-hydroxy-1H-1-benzazepin-1-yl)carbonyl]-o-tolu-m-toluidide. The empirical formula is C26H25ClN2O3 with a molecular weight of 448.94.
Action
Pharmacology: Mechanism of Action: Tolvaptan is a selective vasopressin V2-receptor antagonist with an affinity for the V2-receptor that is 1.8 times that of native arginine vasopressin (AVP). Tolvaptan affinity for the V2-receptor is 29 times greater than for the V1A-receptor. When taken orally, 15-60 mg doses of tolvaptan antagonize the effect of vasopressin and cause an increase in urine water excretion that results in an increase in free water clearance (aquaresis), a decrease in urine osmolality, and a resulting increase in serum sodium concentrations. Urinary excretion of sodium and potassium and plasma potassium concentrations are not significally changed. Tolvaptan metabolites have no or weak antagonist activity for human V2-receptors compared with tolvaptan.
Plasma concentrations of native AVP may increase (average 2-9 pg/mL) with tolvaptan administration.
Pharmacodynamics: In healthy subjects receiving a single dose of Samsca 60 mg, the onset of the aquaretic and sodium increasing effects occurs within 2-4 hrs post-dose. A peak effect of about a 6 mEq increase in serum sodium, and about 9 mL/min increase in urine excretion rate is observed between 4 and 8 hrs post-dose; thus, the pharmacological activity lags behind the plasma concentrations of tolvaptan. About 60% of the peak effect on serum sodium is sustained at 24 hrs post-dose, but the urinary excretion rate is no longer elevated by this time. Doses above tolvaptan 60 mg do not increase aquaresis or serum sodium further. The effects of tolvaptan in the recommended dose range of 15-60 mg once daily appear to be limited to aquaresis and the resulting increase in sodium concentration.
In a parallel-arm, double-blind (for tolvaptan and placebo), placebo- and positive-controlled, multiple dose study of the effect of tolvaptan on the QTc interval, 172 healthy subjects were randomized to tolvaptan 30 mg, tolvaptan 300 mg, placebo or moxifloxacin 400 mg once daily. At both the 30- and 300-mg doses, no significant effect of administering tolvaptan on the QTc interval was detected on Day 1 and Day 5. At the 300-mg dose, peak tolvaptan plasma concentrations were approximately 4-fold higher than the peak concentrations following a 30-mg dose. Moxifloxacin increased the QT interval by 12 millisec at 2 hrs after dosing on Day 1 and 17 millisec at 1 hr after dosing on Day 5, indicating that the study was adequately designed and conducted to detect tolvaptan's effect on the QT interval, had an effect been present.
Clinical Studies: Hyponatremia: In 2 double-blind, placebo-controlled, multicenter studies (SALT-1 and SALT-2), a total of 424 patients with euvolemic or hypervolemic hyponatremia (serum sodium <135 mEq/L) resulting from a variety of underlying causes [heart failure, liver cirrhosis, syndrome of inappropriate antidiuretic hormone (SIADH) and others] were treated for 30 days with tolvaptan or placebo, then followed for an additional 7 days after withdrawal. Symptomatic patients, patients likely to require saline therapy during the course of therapy, patients with acute and transient hyponatremia associated with head trauma or postoperative state, and patients with hyponatremia due to primary polydipsia, uncontrolled adrenal insufficiency or uncontrolled hypothyroidism were excluded. Patients were randomized to receive either placebo (N=220) or tolvaptan (N=223) at an initial oral dose of 15 mg once daily. The mean serum sodium concentration at study entry was 129 mEq/L. Fluid restriction was to be avoided if possible during the first 24 hrs of therapy to avoid overly rapid correction of serum sodium, and during the first 24 hrs of therapy, 87% of patients had no fluid restriction. Thereafter, patients could resume or initiate fluid restriction (defined as daily fluid intake of ≤1 L/day) as clinically indicated.
The dose of tolvaptan could be increased at 24-hr intervals to 30 mg once daily, then to 60 mg once daily, until either the maximum dose of 60 mg or normonatremia (serum sodium >135 mEq/L) was reached. Serum sodium concentrations were determined at 8 hrs after study drug initiation and daily up to 72 hrs, within which time titration was typically completed. Treatment was maintained for 30 days with additional serum sodium assessments on Days 11, 18, 25 and 30. On the day of study discontinuation, all patients resumed previous therapies for hyponatremia and were re-evaluated 7 days later. The primary endpoint for these studies was the average daily area under the curve (AUC) for change in serum sodium from baseline to Day 4 and baseline to Day 30 in patients with a serum sodium <135 mEq/L. Compared to placebo, tolvaptan caused a statistically greater increase in serum sodium (p<0.0001) during both periods in both studies (see Table 1). For patients with a serum sodium of <130 mEq/L or <125 mEq/L, the effects at Day 4 and Day 30 remained significant (see Table 1). This effect was also seen across all disease etiology subsets [eg, congestive heart failure (CHF), cirrhosis, SIADH/other]. (See Table 1.)


In the open-label study SALTWATER, 111 patients, 94 of them hyponatremic (serum sodium <135 mEq/L), previously on tolvaptan or placebo therapy were given tolvaptan as a titrated regimen (15-60 mg once daily) after having returned to standard care for at least 7 days. By this time, their baseline mean serum sodium concentration had fallen to between their original baseline and post-placebo therapy level. Upon initiation of therapy, average serum sodium concentrations increased to approximately the same levels as observed for those previously treated with tolvaptan, and were sustained for at least a year. Figure 3 shows results from 111 patients enrolled in the SALTWATER study (see Figure 3).


In a subgroup of patients with hyponatremia (N=475, serum sodium <135 mEq/L) enrolled in a double-blind, placebo-controlled trial (mean duration of treatment was 9 months) of patients with worsening heart failure, the following adverse reactions occurred in tolvaptan-treated patients at a rate at least 2% greater than placebo: Mortality (42% tolvaptan, 38% placebo), nausea (21% tolvaptan, 16% placebo), thirst (12% tolvaptan, 2% placebo), dry mouth (7% tolvaptan, 2% placebo), and polyuria or pollakiuria (4% tolvaptan, 1% placebo).
The following adverse reactions occurred in <2% of hyponatremic patients treated with Samsca and at a rate greater than placebo in double-blind placebo-controlled trials (N=607 tolvaptan; N=518 placebo) or in <2% of patients in an uncontrolled trial of patients with hyponatremia (N=111) and are not mentioned elsewhere in the label.
Blood and Lymphatic System Disorders: Disseminated intravascular coagulation.
Cardiac Disorders: Intracardiac thrombus, ventricular fibrillation.
Investigations: Prolonged prothrombin time.
Gastrointestinal Disorders: Ischemic colitis.
Metabolism and Nutrition Disorders: Diabetic ketoacidosis.
Musculoskeletal and Connective Tissue Disorders: Rhabdomyolysis.
Nervous System: Cerebrovascular accident.
Renal and Urinary Disorders: Urethral hemorrhage.
Reproductive System and Breast Disorders (Female): Vaginal hemorrhage.
Respiratory, Thoracic and Mediastinal Disorders: Pulmonary embolism, respiratory failure.
Vascular Disorder: Deep vein thrombosis.
View ADR Monitoring Form
Drug Interactions
Effects of Drugs on Tolvaptan: Ketoconazole and Other Strong CYP3A Inhibitors: Samsca is metabolized primarily by CYP3A. Ketoconazole is a strong inhibitor of CYP3A and also an inhibitor of P-gp. Co-administration of Samsca and ketoconazole 200 mg daily results in a 5-fold increase in exposure to tolvaptan. Co-administration of Samsca with ketoconazole 400 mg daily or with other strong CYP3A inhibitors (eg, clarithromycin, itraconazole, telithromycin, saquinavir, nelfinavir, ritonavir and nefazodone) at the highest labeled dose would be expected to cause an even greater increase in tolvaptan exposure. Thus, Samsca and strong CYP3A inhibitors should not be co-administered (see Dosage & Administration and Contraindications).
Moderate CYP3A Inhibitors: The impact of moderate CYP3A inhibitors (eg, erythromycin, fluconazole, aprepitant, diltiazem and verapamil) on the exposure to co-administered tolvaptan has not been assessed. A substantial increase in the exposure to tolvaptan would be expected when Samsca is co-administered with moderate CYP3A inhibitors. Co-administration of Samsca with moderate CYP3A inhibitors should therefore generally be avoided (see Dosage & Administration and Precautions).
Grapefruit Juice: Co-administration of grapefruit juice and Samsca results in a 1.8-fold increase in exposure to tolvaptan (see Dosage & Administration and Precautions).
P-gp Inhibitors: Reduction in the dose of Samsca may be required in patients concomitantly treated with P-gp inhibitors eg, cyclosporine based on clinical response (see Dosage & Administration and Precautions).
Rifampin and Other CYP3A Inducers: Rifampin is an inducer of CYP3A and P-gp. Co-administration of rifampin and Samsca reduces exposure to tolvaptan by 85%. Therefore, the expected clinical effects of Samsca in the presence of rifampin and other inducers (eg, rifabutin, rifapentin, barbiturates, phenytoin, carbamazepine and St. John’s wort) may not be observed at the usual dose levels of Samsca. The dose of Samsca may have to be increased (see Dosage & Administration and Precautions).
Lovastatin, Digoxin, Furosemide and Hydrochlorothiazide: Co-administration of lovastatin, digoxin, furosemide and hydrochlorothiazide with Samsca has no clinically relevant impact on the exposure to tolvaptan.
Effects of Tolvaptan on Other Drugs: Digoxin: Digoxin is a P-gp substrate and Samsca is a P-gp inhibitor. Co-administration of Samsca and digoxin results in a 1.3-fold increase in the exposure to digoxin.
Warfarin, Amiodarone, Furosemide and Hydrochlorothiazide: Co-administration of tolvaptan does not appear to alter the pharmacokinetics of warfarin, furosemide, hydrochlorothiazide or amiodarone (or its active metabolite, desethylamiodarone) to a clinically significant degree.
Lovastatin: Samsca is a weak inhibitor of CYP3A. Co-administration of lovastatin and Samsca increases the exposure to lovastatin and its active metabolite lovastatin-β hydroxyacid by factors of 1.4 and 1.3, respectively. This is not a clinically relevant change.
Pharmacodynamic Interactions: Tolvaptan produces a greater 24-hr urine volume/excretion rate than does furosemide or hydrochlorothiazide. Concomitant administration of tolvaptan with furosemide or hydrochlorothiazide results in a 24-hr urine volume/excretion rate that is similar to the rate after tolvaptan administration alone.
Although specific interaction studies were not performed, in clinical studies tolvaptan was used concomitantly with β-blockers, angiotensin-receptor blockers, angiotensin-converting enzyme (ACE) inhibitors and potassium-sparing diuretics. Adverse reactions of hyperkalemia were approximately 1-2% higher when tolvaptan was administered with angiotensin receptor blockers, ACE inhibitors and potassium-sparing diuretics compared to administration of these medications with placebo. Serum potassium levels should be monitored during concomitant drug therapy.
Storage
Store below 30°C.
Shelf-Life: 36 months.
MIMS Class
Diuretics
ATC Classification
C03XA01 - tolvaptan ; Belongs to the class of vasopressin antagonists. Used as diuretics.