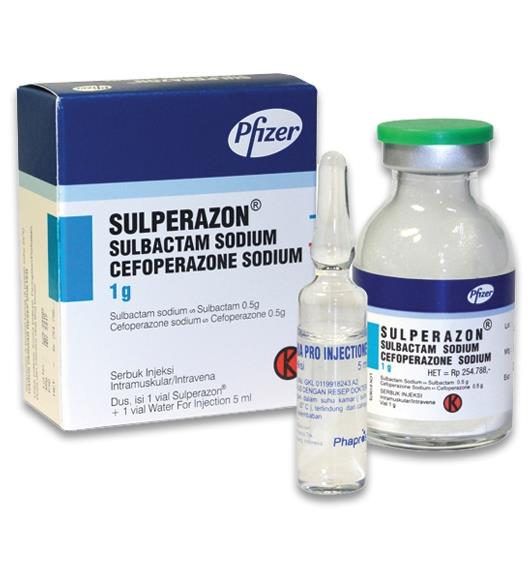 Concise Prescribing Info Bahasa Concise Prescribing Info Full Prescribing Info Contents Description Action Indications/Uses Dosage/Direction for Use Overdosage Contraindications Special Precautions Use In Pregnancy & Lactation Adverse Reactions Drug Interactions Storage MIMS Class ATC Classification Regulatory Classification Presentation/Packing
Full Prescribing Info
Special Precautions
General: As with other antibiotics, vitamin K deficiency has occurred in a few patients treated with cefoperazone. The mechanism is most probably related to the suppression of gut flora which normally synthesize this vitamin. Those at risk include patients with poor diet, malabsorption states (eg, cystic fibrosis) and patients on prolonged IV alimentation regimens. Prothrombin time should be monitored in these patients, and patients receiving anticoagulant therapy and exogenous vitamin K administered as indicated.
As with other antibiotics, overgrowth of nonsusceptible organisms may occur during prolonged use of Sulperazon. Patients should be observed carefully during treatment. As with any potent systemic agent, it is advisable to check periodically for organ system dysfunction during extended therapy; this includes renal, hepatic and hematopoietic systems. This is particularly important in neonates, especially when premature, and other children.
Hypersensitivity: Serious and occasionally fatal hypersensitivity (anaphylactic) reactions have been reported in patients receiving β-lactam or cephalosporin therapy. These reactions are more apt to occur in individuals with a history of hypersensitivity reactions to multiple allergens. If an allergic reaction occurs, Sulperazon should be discontinued and the appropriate therapy instituted.
Serious anaphylactic reactions require immediate emergency treatment with epinephrine. Oxygen, IV steroids and airway management, including intubation, should be administered as indicated.
Use in Hepatic Dysfunction: Cefoperazone is extensively excreted in the bile. The serum half-life of cefoperazone is usually prolonged and urinary excretion of the drug increased in patients with hepatic diseases and/or biliary obstruction. Even with severe hepatic dysfunction, therapeutic concentrations of cefoperazone are obtained in bile and only a 2- to 4-fold increase in half-life is seen.
Dose modification may be necessary in cases of severe biliary obstruction, severe hepatic disease or in cases of renal dysfunction co-existent with either of those conditions. In patients with hepatic dysfunction and concomitant renal impairment, cefoperazone serum concentrations should be monitored and dosage adjusted as necessary. In these cases, dosage should not exceed 2 g/day of cefoperazone.
Clostridium difficile-associated diarrhea (CDAD) has been reported with use of nearly all antibacterial agents, including sulbactam sodium/cefoperazon sodium, and may range in severity from mild diarrhea to fatal colitis. Treatment with antibacterial agents alters the normal flora of the colon leading to overgrowth of C.difficile.
C. difficile produces toxins A and B which contribute to the development of CDAD. Hypertoxin producing strains of C.difficile cause increased morbidity and mortality, as these infections can be refractory to antimicrobial therapy and may require colectomy. CDAD must be considered in all patients who present with diarrhea following antibiotic use. Careful medical history is necessary since CDAD has been reported to occur over 2 months after the administration of antibacterial agents.
Effects on the Ability to Drive or Operate Machinery: Clinical experience with sulbactam/cefoperazone indicates that it is unlikely to impair a patient's ability to drive or use machines.
Use in pregnancy: Reproduction studies have been performed in rats at doses up to 10 times the human dose and have revealed no evidence of impaired fertility and no teratogenic findings. Sulbactam and cefoperazone cross the placental barrier. There are, however, no adequate and well-controlled studies in pregnant women. Because animal reproduction studies are not always predictive of human response, Sulperazon should be used during pregnancy only if clearly needed.
Use in lactation: Only small quantities of sulbactam and cefoperazone are excreted in human milk. Although both drugs pass poorly into breast milk of nursing mothers, caution should be exercised when Sulperazon is administered to a nursing mother.
Use in children: Sulperazon has been effectively used in children. It has not been extensively studied in premature infants or neonates. Therefore, in treating premature children and neonates, potential benefits and possible risks involved should be considered before instituting therapy.
Cefoperazone does not displace bilirubin from plasma protein-binding sites.