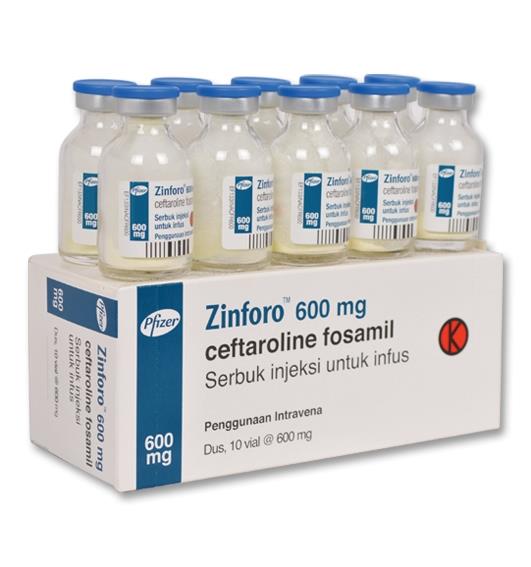 NEW Brand Resources
Concise Prescribing Info Bahasa Concise Prescribing Info Full Prescribing Info Contents Description Action Indications/Uses Dosage/Direction for Use Overdosage Contraindications Special Precautions Use In Pregnancy & Lactation Adverse Reactions Drug Interactions Caution For Usage Storage MIMS Class ATC Classification Regulatory Classification Presentation/Packing Brand Resources
Full Prescribing Info
Action
Pharmacology: Pharmacodynamics: Mechanism of action: Ceftaroline is a cephalosporin with activity against Gram-positive and Gram-negative bacteria. In-vitro studies have shown that ceftaroline is bactericidal, due to inhibition of bacterial cell wall synthesis by binding to penicillin binding proteins (PBPs). Ceftaroline is also active against methicillin-resistant Staphylococcus aureus (MRSA) and penicillin-nonsusceptible Streptococcus pneumoniae (PNSP) due to its high affinity for the altered PBPs found in these organisms.
Pharmacokinetic/pharmacodynamic relationship: As with other beta-lactam antimicrobial agents, the percent time above the minimum inhibitory concentration (MIC) of the infecting organism over the dosing interval (%T > MIC) has been shown to best correlate with the antimicrobial activities for ceftaroline.
Mechanisms of resistance: Ceftaroline is not active against strains of Enterobacteriaceae producing extended-spectrum beta-lactamases (ESBLs) from the TEM, SHV or CTX-M families, serine carbapenemases (such as KPC), class B metallo-beta-lactamases or class C (AmpC cephalosporinases). Resistance may also be mediated by bacterial impermeability or drug efflux pump mechanisms. One or more of these mechanisms may co-exist in the same bacterium.
Cross-resistance: Unlike other cephalosporins, ceftaroline is active against most MRSA and PNSP due to its ability to bind to the altered PBPs in these organisms that commonly confer insusceptibility to other beta-lactam agents.
Interaction with other antibacterial agents: In vitro studies have not demonstrated any antagonism between ceftaroline in combination with other commonly used antibacterial agents (e.g., amikacin, azithromycin, aztreonam, daptomycin, levofloxacin, linezolid, meropenem, tigecycline, and vancomycin).
Susceptibility testing: The prevalence of acquired resistance may vary geographically and with time for selected species. Local information on resistance is desirable, particularly when treating severe infections. As necessary, expert advice should be sought when the local prevalence of resistance is such that the utility of the agent is questionable.
The susceptibility to ceftaroline of a given clinical isolate should be determined by standard methods. Interpretations of test results should be made in accordance with local infectious diseases and clinical microbiology guidelines.
Clinical efficacy against specific pathogens: Efficacy has been demonstrated in clinical studies against pathogens that were susceptible to ceftaroline in vitro.
Complicated skin and soft tissue infections: Gram-positive organisms: Staphylococcus aureus (including methicillin- resistant strains); Streptococcus pyogenes; Streptococcus agalactiae.
Gram-negative organisms: Escherichia coli; Klebsiella pneumoniae; Klebsiella oxytoca.
Antibacterial activity against other relevant pathogens: Clinical efficacy has not been established against the following pathogens although in vitro studies suggest that they would be susceptible to ceftaroline in the absence of acquired mechanisms of resistance: Anaerobic Gram-positive organisms: Peptostreptococcus species.
Anaerobic Gram-negative organisms: Fusobacterium species.
Clinical efficacy and safety: Complicated skin and soft tissue infections: A total of 1396 adults with documented complicated skin and soft tissue infections were enrolled in two identical randomised, multi-centre, multinational, double-blind studies (CANVAS 1 and CANVAS 2) comparing ZINFORO (600 mg administered intravenously over 60 minutes every 12 hours) to vancomycin plus aztreonam (1 g vancomycin administered intravenously over 60 minutes followed by 1 g aztreonam administered intravenously over 60 minutes every 12 hours). Patients with deep/extensive cellulitis, a major abscess, a wound infection (surgical or traumatic), infected bites, burns or ulcers, or any lower extremity infection in patients with either pre-existing diabetes mellitus or peripheral vascular disease, were eligible for the studies. Treatment duration was 5 to 21 days. The modified intent-to-treat (MITT) population included all patients who received any amount of study drug according to their randomised treatment group. The clinically evaluable (CE) population included patients in the MITT population with sufficient adherence to the protocol.
The primary efficacy endpoint was the clinical response at the Test of Cure (TOC) visit in the co-primary populations of the CE and MITT patients in the table as follows. (See Table 1.)


Clinical cure rates at TOC by pathogen in the microbiologically evaluable patients are presented as follows. (See Table 2.)


Pharmacokinetics: The Cmax and AUC of ceftaroline increase approximately in proportion to dose within the single dose range of 50 to 1000 mg. No appreciable accumulation of ceftaroline is observed following multiple intravenous infusions of 600 mg administered over 60 minutes every 12 hours for up to 14 days in healthy adults with normal renal function.
Distribution: The plasma protein binding of ceftaroline is low (approximately 20%) and ceftaroline is not distributed into erythrocytes. The median steady-state volume of distribution of ceftaroline in healthy adult males following a single 600 mg intravenous dose of radiolabeled ceftaroline fosamil was 20.3 L, similar to the volume of extracellular fluid.
Metabolism: Ceftaroline fosamil (prodrug), is converted into the active ceftaroline in plasma by phosphatase enzymes and concentrations of the prodrug are measurable in plasma primarily during intravenous infusion. Hydrolysis of the beta-lactam ring of ceftaroline occurs to form the microbiologically inactive, open-ring metabolite, ceftaroline M-1. The mean plasma ceftaroline M-1 to ceftaroline AUC ratio following a single 600 mg intravenous infusion of ceftaroline fosamil in healthy subjects is approximately 20-30%.
In pooled human liver microsomes, metabolic turnover was low for ceftaroline, indicating that ceftaroline is not metabolised by hepatic CYP450 enzymes.
Excretion: Ceftaroline is primarily eliminated by the kidneys. Renal clearance of ceftaroline is approximately equal, or slightly lower than the glomerular filtration rate in the kidney, and in vitro transporter studies indicate that active secretion does not contribute to the renal elimination of ceftaroline.
The mean terminal elimination half-life of ceftaroline in healthy adults is approximately 2.5 hours.
Following the administration of a single 600 mg intravenous dose of radiolabeled ceftaroline fosamil to healthy male adults, approximately 88% of radioactivity was recovered in urine and 6% in faeces.
Special populations: Patients with renal impairment: Dosage adjustment is required in patients with moderate renal impairment (CrCL > 30 to 50 ml/min). There is insufficient data to make specific dosage adjustment recommendations for patients with severe renal impairment (CrCL ≤ 30 ml/min) and end-stage renal disease (ESRD), including patients undergoing haemodialysis.
Patients with hepatic impairment: The pharmacokinetics of ceftaroline in patients with hepatic impairment have not been established. As ceftaroline does not appear to undergo significant hepatic metabolism, the systemic clearance of ceftaroline is not expected to be significantly affected by hepatic impairment. Therefore, no dosage adjustment is recommended for patients with hepatic impairment.
Elderly patients: Following administration of a single 600 mg intravenous dose of ZINFORO, the pharmacokinetics of ceftaroline was similar between healthy elderly subjects (≥ 65 years of age), and healthy young adult subjects (18-45 years of age). There was a slight 33% increase in AUC0-∞ in the elderly that was mainly attributable to age-related changes in renal function. ZINFORO dose adjustment is not required in elderly patients with creatinine clearance above 50 ml/min.
Paediatric patients: The safety and efficacy of ZINFORO in paediatric patients have not been established.
Gender: The pharmacokinetics of ceftaroline were similar between males and females. No dose adjustment is required based on sex.
Race: Race was evaluated as a covariate in a population pharmacokinetic analysis on data from the clinical studies. No significant differences in ceftaroline pharmacokinetics were observed in Caucasian, Hispanic, Black, or other patients. No dosage adjustment is recommended based on race.
Toxicology: Preclinical safety data: The kidney was the primary target organ of toxicity in both the monkey and rat. Histopathologic findings included pigment deposition and inflammation of the tubular epithelium. Renal changes were not reversible but were reduced in severity following a 4 week recovery period.
Convulsions have been observed at relatively high exposures during single and multi dose studies in both the rat and monkey (≥ 7 times to the estimated Cmax level of a 600 mg twice a day).
Other important toxicologic findings noted in the rat and monkey included histopathologic changes in the bladder and spleen.
Genetic toxicology: Ceftaroline fosamil and ceftaroline were clastogenic in an in vitro chromosomal aberration assay, however there was no evidence of mutagenic activity in an Ames, mouse lymphoma and unscheduled DNA synthesis assay. Furthermore, in vivo micronucleus assays in rat and mouse were negative. Carcinogenicity studies have not been conducted.
Reproductive toxicology: Reproductive studies in pregnant rabbits resulted in an increased foetal incidence of angulated hyoid alae, a common skeletal variation in rabbit foetuses, at exposures similar to 600 mg twice daily in humans. In the rat, no adverse effects were observed on embryofoetal development, fertility or postnatal development.