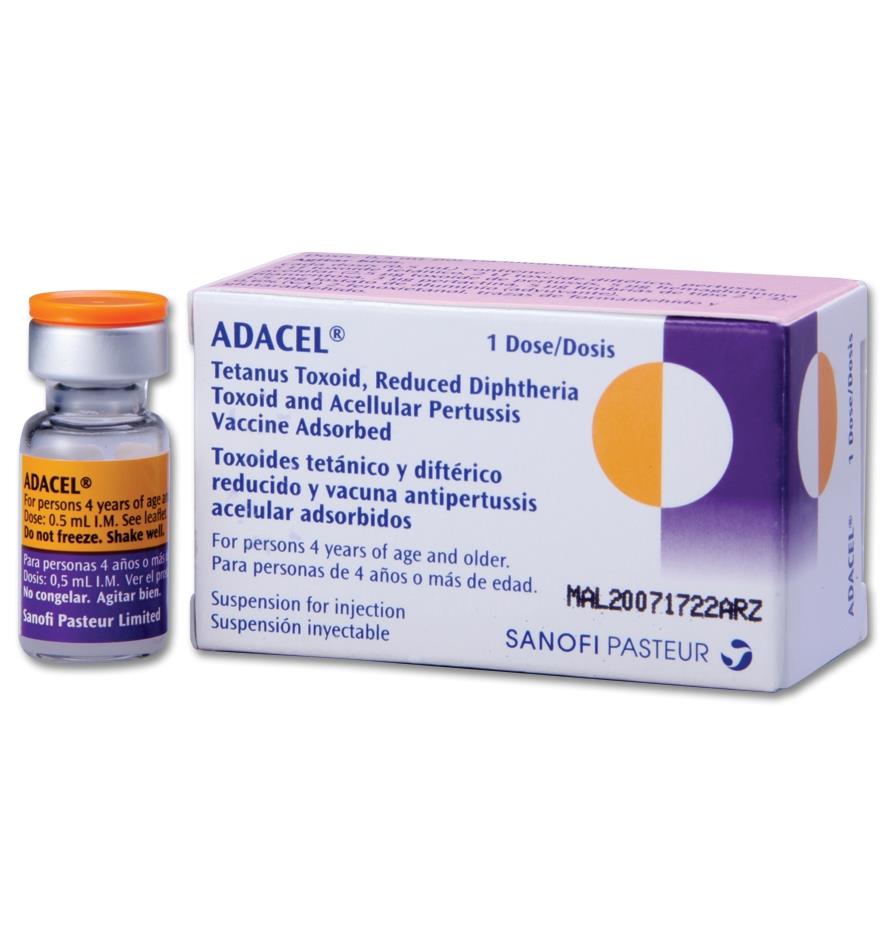 NEW Brand Resources
Concise Prescribing Info Full Prescribing Info Contents Description Action Indications/Uses Dosage/Direction for Use Contraindications Special Precautions Use In Pregnancy & Lactation Adverse Reactions Drug Interactions Storage MIMS Class ATC Classification Regulatory Classification Presentation/Packing Brand Resources
The information highlighted (if any) are the most recent updates for this brand.
Full Prescribing Info
Adverse Reactions
Clinical Trial Adverse Reactions: Because clinical trials are conducted under widely varying conditions, adverse reaction rates observed in the clinical trials of a vaccine cannot be directly compared to rates in the clinical trials of another vaccine and may not reflect the rates observed in practice. The adverse reaction information from clinical trials does, however, provide a basis for identifying the adverse events that appear to be related to vaccine use and for approximating rates of those events.
The safety of ADACEL was evaluated in a total of 5,818 participants who received a single dose of ADACEL in 6 clinical trials (298 children ≥4 years of age, 1,508 adolescents, 2,842 adults <65 years of age and 1,170 adults ≥65 years of age).
Pain at the injection site was the most common solicited injection site reaction. Most injection site reactions occurred within 3 days following vaccination and their mean duration was less than 3 days. The most frequent systemic reaction was tiredness in children and headache in adolescents and adults (18-64 years). Myalgia was the most frequently reported systemic reaction among older adults ≥ 65 years of age. Fever was reported in less than 10% of vaccinees. These reactions were usually transient and of mild to moderate intensity. In addition, in adolescents and adults the incidence of injection site and systemic reactions following ADACEL was comparable to those observed with a Td vaccine booster. In children the observed frequencies of injection site and fever following ADACEL were significantly lower than those observed with QUADRACEL (DTaP-IPV) when administered as a booster at 4 to 6 years of age. Except for fever, the observed rates for the systemic reactions were comparable between the two vaccines. The frequency of the solicited injection site and systemic reactions reported in two clinical trials are shown in Table 3.
Two serious adverse events were reported during Study Td506 which were considered related to the vaccination: a case of severe migraine with unilateral facial paralysis, and a diagnosis of nerve compression in the neck and left arm. Both of these conditions resolved spontaneously or with treatment. (See Tables 3 and 4.)

Data from Post-marketing Experience: The following additional adverse events have been spontaneously reported during the post-marketing use of ADACEL. Because these events are reported voluntarily from a population of uncertain size, it is not always possible to reliably estimate their frequency or establish a causal relationship to vaccine exposure. Decisions to include these events in labelling were based on one or more of the following factors: 1) severity of the event, 2) frequency of reporting, or 3) strength of causal connection to ADACEL.
Immune System Disorders: Hypersensitivity (anaphylactic) reaction (angioedema, edema, rash, hypotension).
Nervous System Disorders: Paraesthesia, hypoesthesia, Guillain-Barré syndrome, brachial neuritis, facial palsy, convulsion, syncope, myelitis.
Cardiac Disorders: Myocarditis.
Skin and Subcutaneous Tissue Disorders: Pruritus, urticaria.
Musculoskeletal and Connective Tissue Disorders: Myositis, muscle spasm.
General Disorders and Administration Site Conditions: Large injection site reactions (>50 mm) and extensive limb swelling from the injection site beyond one or both joints have been reported after administration of ADACEL in adolescents and adults. These reactions usually start within 24 - 72 hours after vaccination, may be associated with erythema, warmth, tenderness or pain at the injection site and resolve spontaneously within 3 - 5 days. The risk appears to be dependent on the number of prior doses of acellular pertussis containing vaccine.
Injection site bruising, sterile abscess.
View ADR Monitoring Form