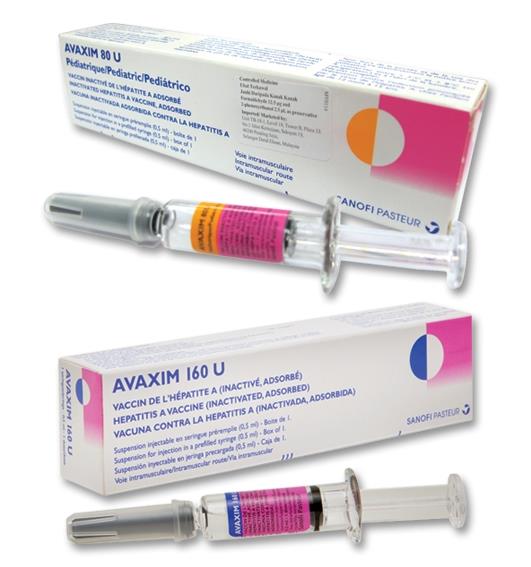 Concise Prescribing Info Full Prescribing Info Contents Description Action Indications/Uses Dosage/Direction for Use Overdosage Contraindications Special Precautions Use In Pregnancy & Lactation Adverse Reactions Drug Interactions Caution For Usage Storage MIMS Class ATC Classification Regulatory Classification Presentation/Packing
Full Prescribing Info
Special Precautions
As with all injectable vaccines, available appropriate medical treatment and subject monitoring are recommended in case of an anaphylactic reaction after vaccine administration.
Syncope (fainting) can occur following, or even before, any vaccination as a psychogenic response to the needle injection, especially in adolescents. This may be accompanied by several neurological signs such as transient sight disorders, paraesthesia and tonic-clonic limb movements during the recovery phase. It is important that procedures be in place to avoid any injury from faints.
AVAXIM 80 U PEDIATRIC and AVAXIM 160 U has not been studied in patients with impaired immunity.
The immune response to the vaccine may be impaired by immunosuppressive treatment or immunodeficiency. In such cases it is then recommended to wait until the end of treatment before vaccinating or to make sure the subject is well protected. Nevertheless, vaccination of subjects with chronic immunodeficiency such as HIV infection is recommended even though the antibody response might be limited.
Because of the incubation period of hepatitis A, infection may already be present, although asymptomatic, at the time of vaccination.
The effect of administering AVAXIM 80 U PEDIATRIC and 160 U during the incubation period of hepatitis A has not been documented.
In such a case, vaccination may have no effect on the development of hepatitis A.
The use of this vaccine in subjects with liver disease should be considered with caution, as no studies have been performed in such subjects.
As with all vaccines, vaccination may not induce a protective response in some vaccinees.
The vaccine does not protect against infection caused by hepatitis B virus, hepatitis C virus, hepatitis E virus or by other known liver pathogens.
AVAXIM 80 U PEDIATRIC and AVAXIM 160 U, suspension for injection in prefilled syringe contains ethanol, phenylalanine, potassium and sodium: AVAXIM 80 U PEDIATRIC and AVAXIM 160 U contains small amounts of ethanol (alcohol), less than 100 mg per dose.
AVAXIM 80 U PEDIATRIC and AVAXIM 160 U contains 10 micrograms of phenylalanine in each 0.5 ml dose, which is equivalent to 0.17 micrograms/kg for a 60 kg person. Phenylalanine may be harmful for people with phenylketonuria (PKU), a rare genetic disorder in which phenylalanine builds up because the body cannot remove it properly.
AVAXIM 80 U PEDIATRIC and AVAXIM 160 U contains less than 1 mmol of potassium (39 mg) and sodium (23 mg) per dose, that is to say essentially "potassium-free" and "sodium-free".
Effects on ability to drive and use machines: The effects on the ability to drive and use machines have not been studied.