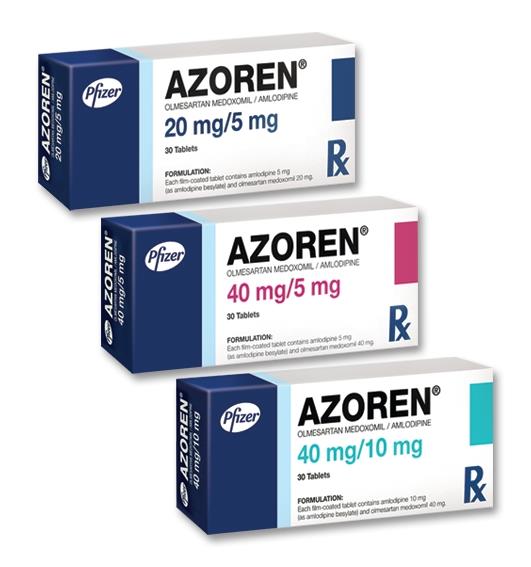 Single cases of rhabdomyolysis have been reported in temporal association with the intake of angiotensin II receptor blockers. Single cases of extrapyramidal syndrome have been reported in patients treated with amlodipine.
View ADR Monitoring Form
Drug Interactions
Potential interactions related to the Azoren combination: To be taken into account with concomitant use: Other antihypertensive agents: The blood pressure lowering effect of Azoren can be increased by concomitant use of other antihypertensive medicinal products (e.g. alpha blockers, diuretics).
Potential interactions related to the olmesartan medoxomil component of Azoren: Concomitant use not recommended: ACE-inhibitors, angiotensin II receptor blockers or aliskiren: Clinical trial data has shown that dual blockade of the renin-angiotensin-aldosterone-system (RAAS) through the combined use of ACE-inhibitors, angiotensin II receptor blockers or aliskiren is associated with a higher frequency of adverse events such as hypotension, hyperkalaemia and decreased renal function (including acute renal failure) compared to the use of a single RAAS-acting agent (see Contraindications, Precautions, and Pharmacology: Pharmacodynamics under Actions).
Medicinal products affecting potassium levels: Concomitant use of potassium-sparing diuretics, potassium supplements, salt substitutes containing potassium or other medicinal products that may increase serum potassium levels (e.g. heparin, ACE inhibitors) may lead to increases in serum potassium (see Precautions). If medicinal products which affect potassium levels are to be prescribed in combination with Azoren, monitoring of serum potassium levels is recommended.
Lithium: Reversible increases in serum lithium concentrations and toxicity have been reported during concomitant administration of lithium with angiotensin converting enzyme inhibitors and, rarely, with angiotensin II antagonists. Therefore, concomitant use of Azoren and lithium is not recommended (see Precautions). If concomitant use of Azoren and lithium proves necessary, careful monitoring of serum lithium levels is recommended.
Concomitant use requiring caution: Non-steroidal anti-inflammatory medicinal products (NSAIDs) including selective COX-2 inhibitors, acetylsalicylic acid (>3 g/day) and non-selective NSAIDs: When angiotensin II antagonists are administered simultaneously with NSAIDs, attenuation of the antihypertensive effect may occur. Furthermore, concomitant use of angiotensin II antagonists and NSAIDs may increase the risk of worsening of renal function and may lead to an increase in serum potassium. Therefore, monitoring of renal function at the beginning of such concomitant therapy is recommended, as well as adequate hydration of the patient.
Bile acid sequestering agent colesevelam: Concurrent administration of the bile acid sequestering agent colesevelam hydrochloride reduces the systemic exposure and peak plasma concentration of olmesartan and reduces t½. Administration of olmesartan medoxomil at least 4 hours prior to colesevelam hydrochloride decreased the drug interaction effect. Administering olmesartan medoxomil at least 4 hours before the colesevelam hydrochloride dose should be considered (see Pharmacology: Pharmacokinetics under Actions).
Additional information: After treatment with antacid (aluminium magnesium hydroxide), a modest reduction in bioavailability of olmesartan was observed.
Olmesartan medoxomil had no significant effect on the pharmacokinetics or pharmacodynamics of warfarin or the pharmacokinetics of digoxin. Co-administration of olmesartan medoxomil with pravastatin had no clinically relevant effects on the pharmacokinetics of either component in healthy subjects.
Olmesartan had no clinically relevant inhibitory effects on human cytochrome P450 enzymes 1A1/2, 2A6, 2C8/9, 2C19, 2D6, 2E1 and 3A4 in vitro, and had no or minimal inducing effects on rat cytochrome P450 activities. No clinically relevant interactions between olmesartan and medicinal products metabolised by the above cytochrome P450 enzymes are expected.
Potential interactions related to the amlodipine component of Azoren: Effects of other medicinal products on amlodipine: CYP3A4 inhibitors: Concomitant use of amlodipine with strong or moderate CYP3A4 inhibitors (protease inhibitors, azole antifungals, macrolides like erythromycin or clarithromycin, verapamil or diltiazem) may give rise to significant increase in amlodipine exposure. The clinical translation of these PK variations may be more pronounced in the elderly. There is an increased risk of hypotension. Close observation of patients is recommended and dose adjustment may thus be required.
CYP3A4 inducers: Upon co-administration of known inducers of the CYP3A4, the plasma concentration of amlodipine may vary. Therefore, blood pressure should be monitored and dose regulation considered both during and after concomitant medication particularly with strong CYP3A4 inducers (e.g. rifampicin, Hypericum perforatum).
Administration of amlodipine with grapefruit or grapefruit juice is not recommended as bioavailability may be increased in some patients resulting in increased blood pressure lowering effects.
Dantrolene (infusion): In animals, lethal ventricular fibrillation and cardiovascular collapse are observed in association with hyperkalaemia after administration of verapamil and intravenous dantrolene. Due to risk of hyperkalaemia, it is recommended that the co-administration of calcium channel blockers such as amlodipine be avoided in patients susceptible to malignant hyperthermia and in the management of malignant hyperthermia.
Effects of amlodipine on other medicinal products: The blood pressure lowering effects of amlodipine adds to the blood pressure-lowering effects of other antihypertensive agents.
In clinical interaction studies, amlodipine did not affect the pharmacokinetics of atorvastatin, digoxin or warfarin.
Simvastatin: Co-administration of multiple doses of 10 mg of amlodipine with 80 mg simvastatin resulted in a 77% increase in exposure to simvastatin compared to simvastatin alone. Limit the dose of simvastatin in patients on amlodipine to 20 mg daily.
Tacrolimus: There is a risk of increased tacrolimus blood levels when co-administered with amlodipine. In order to avoid toxicity of tacrolimus, administration of amlodipine in a patient treated with tacrolimus requires monitoring of tacrolimus blood levels and dose adjustment of tacrolimus when appropriate.
Cyclosporine: In a prospective study in renal transplant patients, an average 40% increase in trough cyclosporine levels was observed when used concomitantly with amlodipine. The co-administration of Azoren with cyclosporine may increase exposure to cyclosporine. Monitor trough cyclosporine levels during concomitant use and cyclosporine dose reductions should be made as necessary.
Caution For Usage
Incompatibilities: Not applicable.
Special precautions for disposal: No special requirements.
Storage
Store below 30°C.
MIMS Class
Angiotensin II Antagonists / Calcium Antagonists
ATC Classification
C09DB02 - olmesartan medoxomil and amlodipine ; Belongs to the class of angiotensin II receptor blockers (ARBs) and calcium channel blockers. Used in the treatment of cardiovascular disease.