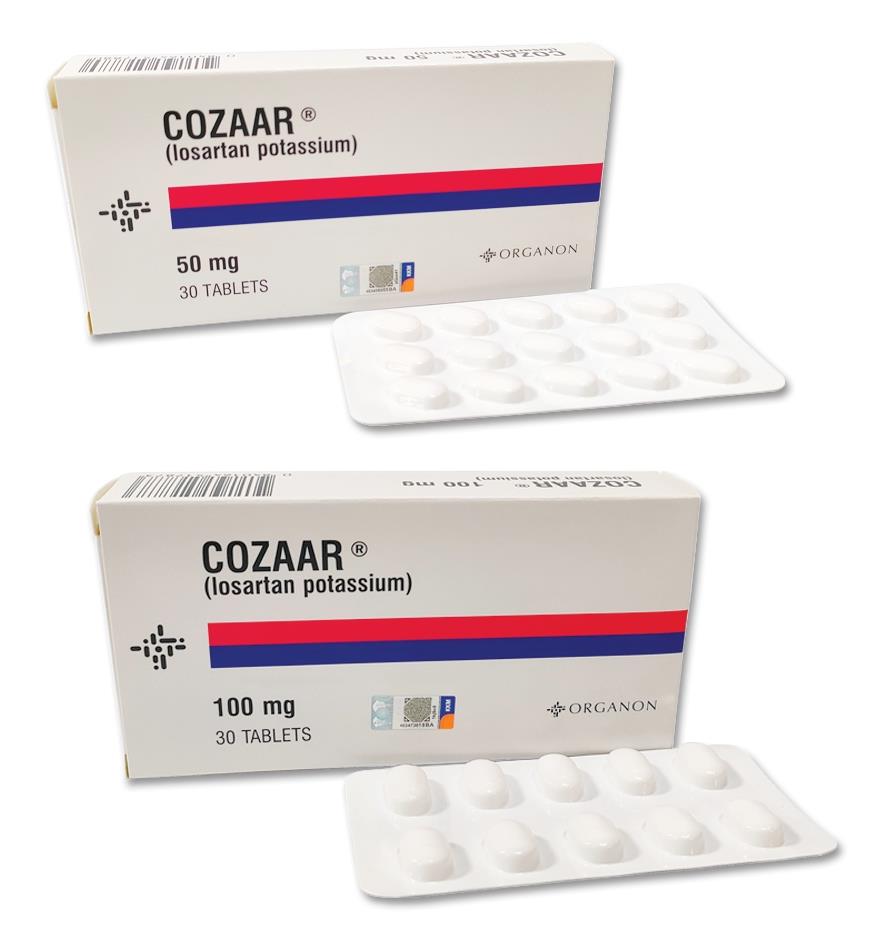 COZAAR was generally well tolerated in a controlled clinical trial in hypertensive patients with left ventricular hypertrophy. The most common drug-related side effects were dizziness, asthenia/fatigue, and vertigo.
In the LIFE study, among patients without diabetes at baseline, there was a lower incidence of new onset diabetes mellitus with COZAAR as compared to atenolol (242 patients versus 320 patients, respectively, p<0.001). Because there was no placebo group included in the study, it is not known if this represents a beneficial effect of COZAAR or an adverse effect of atenolol.
COZAAR was generally well tolerated in a controlled clinical trial in type 2 diabetic patients with proteinuria. The most common drug-related side effects were asthenia/fatigue, dizziness, hypotension and hyperkalemia (see Hypotension and Electrolyte/Fluid Imbalance under PRECAUTIONS).
The following additional adverse reactions have been reported in post-marketing experience: Hypersensitivity: Anaphylactic reactions, angioedema including swelling of the larynx and glottis causing airway obstruction and/or swelling of the face, lips, pharynx and/or tongue has been reported rarely in patients treated with losartan; some of these patients previously experienced angioedema with other drugs including ACE inhibitors. Vasculitis, including Henoch-Schoenlein purpura, has been reported rarely.
Gastrointestinal: Hepatitis (reported rarely), liver function abnormalities, vomiting.
General disorders and administration site conditions: Malaise.
Hematologic: Anemia, thrombocytopenia (reported rarely).
Musculoskeletal: Myalgia, arthralgia.
Nervous System/Psychiatric: Migraine, dysgeusia.
Reproductive system and breast disorders: Erectile dysfunction/impotence.
Respiratory: Cough.
Skin: Urticaria, pruritus, erythroderma, photosensitivity.
Laboratory Test Findings: In controlled clinical trials for essential hypertension, clinically important changes in standard laboratory parameters were rarely associated with administration of COZAAR. Hyperkalemia (serum potassium >5.5 mEq/L) occurred in 1.5% of patients in the hypertension clinical trials. In a clinical study conducted in type 2 diabetic patients with proteinuria, 9.9% of patients treated with COZAAR and 3.4% of patients treated with placebo developed hyperkalemia (see Hypotension and Electrolyte/Fluid Imbalance under PRECAUTIONS). Elevations of ALT occurred rarely and usually resolved upon discontinuation of therapy.
Drug Interactions
In clinical pharmacokinetic trials, no drug interactions of clinical significance have been identified with hydrochlorothiazide, digoxin, warfarin, cimetidine, phenobarbital, ketoconazole, and erythromycin. Rifampin and fluconazole have been reported to reduce levels of active metabolite. The clinical consequences of these interactions have not been evaluated.
As with other drugs that block angiotensin II or its effects, concomitant use of potassium-sparing diuretics (e.g., spironolactone, triamterene, amiloride), potassium supplements, salt substitutes containing potassium, or other drugs that may increase serum potassium (e.g., trimethoprim-containing products) may lead to increases in serum potassium.
As with other drugs which affect the excretion of sodium, lithium excretion may be reduced. Therefore, serum lithium levels should be monitored carefully if lithium salts are to be co-administered with angiotensin II receptor antagonists.
Non-steroidal anti-inflammatory drugs (NSAIDs) including selective cyclooxygenase-2 inhibitors (COX-2 inhibitors) may reduce the effect of diuretics and other antihypertensive drugs. Therefore, the antihypertensive effect of angiotensin II receptor antagonists or ACE inhibitors may be attenuated by NSAIDs including selective COX-2 inhibitors.
In some patients with compromised renal function (e.g., elderly patients or patients who are volume-depleted, including those on diuretic therapy) who are being treated with non-steroidal anti-inflammatory drugs, including selective cyclooxygenase-2 inhibitors, the co-administration of angiotensin II receptor antagonists or ACE inhibitors may result in a further deterioration of renal function, including possible acute renal failure. These effects are usually reversible. Therefore, the combination should be administered with caution in patients with compromised renal function.
Dual blockade of the renin-angiotensin-aldosterone system (RAAS) with angiotensin receptor blockers, ACE inhibitors, or aliskiren is associated with increased risks of hypotension, syncope, hyperkalemia, and changes in renal function (including acute renal failure) compared to monotherapy. Close monitor blood pressure, renal function, and electrolytes in patients on COZAAR and other agents that affect the RAAS. Do not co-administer aliskiren with COZAAR in patients with diabetes. Avoid use of aliskiren with COZAAR in patients with renal impairment (GFR <60 ml/min).
Grapefruit juice may lower the concentration of active metabolite.
Storage
Store at temperature below 30°C. Protect from light.
MIMS Class
Angiotensin II Antagonists
ATC Classification
C09CA01 - losartan ; Belongs to the class of angiotensin II receptor blockers (ARBs). Used in the treatment of cardiovascular disease.