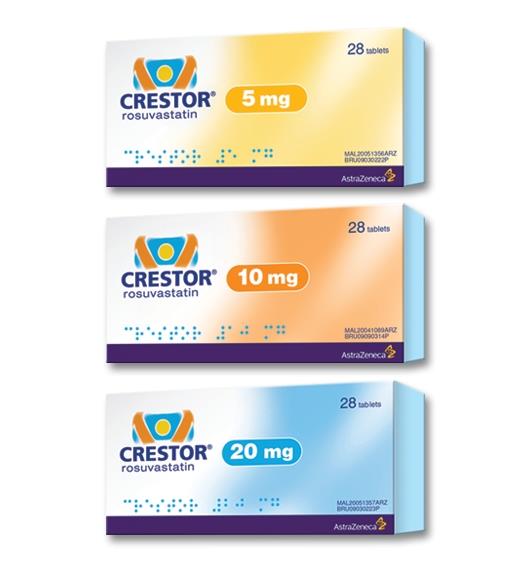 NEW Brand Resources
Concise Prescribing Info Full Prescribing Info Contents Description Action Indications/Uses Dosage/Direction for Use Overdosage Contraindications Special Precautions Use In Pregnancy & Lactation Adverse Reactions Drug Interactions Caution For Usage Storage MIMS Class ATC Classification Regulatory Classification Presentation/Packing Brand Resources
The information highlighted (if any) are the most recent updates for this brand.
Full Prescribing Info
Contents
Rosuvastatin calcium.
Description
Each tablet contains 5 mg, 10 mg or 20 mg of rosuvastatin as rosuvastatin calcium.
Excipients/Inactive Ingredients: Tablet core: Crospovidone, Lactose monohydrate, Microcrystalline cellulose, Calcium phosphate, Magnesium stearate.
Tablet coat: Lactose monohydrate, Hypromellose, Triacetin, Titanium dioxide (E171), Yellow Ferric oxide (E172) (5 mg tablet), Red Ferric oxide (E172) (10 mg and 20 mg tablets).
Action
Pharmacotherapeutic group: HMG-CoA reductase inhibitors. ATC code: C10A A07.
Pharmacology: Pharmacodynamics: Mechanism of action: Rosuvastatin is a selective, potent and competitive inhibitor of HMG-CoA reductase, the rate-limiting enzyme that converts 3-hydroxy-3-methylglutaryl coenzyme A to mevalonate, a precursor of cholesterol. Triglycerides (TG) and cholesterol in the liver are incorporated, with apolipoprotein B (ApoB), into very low density lipoprotein (VLDL) and released into the plasma for delivery to peripheral tissues. VLDL particles are TG-rich. Cholesterol-rich low density lipoprotein (LDL) is formed from VLDL and is cleared primarily through the high affinity LDL receptor in the liver.
Rosuvastatin produces its lipid-modifying effects in two ways; it increases the number of hepatic LDL receptors on the cell-surface, enhancing uptake and catabolism of LDL and it inhibits the hepatic synthesis of VLDL, thereby reducing the total number of VLDL and LDL particles.
High density lipoprotein (HDL), which contains ApoA-I is involved, amongst other things, in transport of cholesterol from tissues back to the liver (reverse cholesterol transport).
The involvement of LDL-C in atherogenesis has been well documented. Epidemiological studies have established that high LDL-C, TG, low HDL-C and ApoA-I have been linked to a higher risk of cardiovascular disease. Intervention studies have shown the benefits on mortality and CV event rates of lowering LDL-C and TG or raising HDL-C. More recent data has linked the beneficial effects of HMG-CoA reductase inhibitors to lowering of non-HDL (i.e. all circulating cholesterol not in HDL) and ApoB or reducing the ApoB/ApoA-I ratio.
Clinical efficacy: Crestor reduces elevated LDL-cholesterol, total cholesterol and triglycerides and increases HDL-cholesterol. It also lowers ApoB, nonHDL-C, VLDL-C, VLDL-TG and increases ApoA-I (see Tables 1 and 2).
Crestor also lowers the LDL-C/HDL-C, total C/HDL-C, nonHDL-C/HDL-C and ApoB/ApoA-I ratio's.
A therapeutic response to Crestor is evident within 1 week of commencing therapy and 90% of maximum response is usually achieved in 2 weeks. The maximum response is usually achieved by 4 weeks and is maintained after that. (See Tables 1 and 2.)

The data in Tables 1 and 2 are confirmed by the broader clinical programme of over 5,300 patients given Crestor.
In a study of patients with heterozygous familial hypercholesterolaemia, 435 subjects were given Crestor from 20 mg to 80 mg in a force-titration design. All doses of Crestor showed a beneficial effect on lipid parameters and treatment to target goals. Following titration to 40 mg (12 weeks of treatment) LDL-C was reduced by 53%.
In a force-titration open label study, 42 patients with homozygous familial hypercholesterolaemia were evaluated for their response to Crestor 20 - 40 mg titrated at a 6 week interval. In the overall population, the mean LDL-C reduction was 22%. In the 27 patients with at least a 15% reduction by week 12 (considered to be the responder population), the mean LDL-C reduction was 26% at the 20 mg dose and 30% at the 40 mg dose. Of the 13 patients with an LDL-C of less than 15%, 3 had no response or an increase in LDL-C.
In a randomized, multi-center, double-blind crossover study, 32 patients (27 with ε2/ε2 and 4 with apo E mutation [Arg145Cys] with primary dysbetalipoproteinemia (Type III Hyperlipoproteinemia) entered a 6-week dietary lead-in period on the NCEP Therapeutic Lifestyle Change (TLC) diet. Following dietary lead-in, patients were randomized to a sequence of treatments in conjunction with the TLC diet for 6 weeks each: rosuvastatin 10 mg followed by rosuvastatin 20 mg or rosuvastatin 20 mg followed by rosuvastatin 10 mg. Crestor reduced nonHDL-C (primary endpoint) and circulating remnant lipoprotein levels. Results are shown in the table as follows. (See Table 3.)

In the Measuring Effects on Intima Media Thickness: an Evaluation Of Rosuvastatin 40 mg (METEOR) study, the effect of therapy with Crestor on carotid atherosclerosis was assessed by B-mode ultrasonography in patients with elevated LDL-C, at low risk (Framingham risk <10% over ten years) for symptomatic coronary artery disease and with subclinical atherosclerosis as evidenced by carotid intimal-medial thickness (cIMT). In this double-blind, placebo-controlled clinical study 984 patients were randomized (of whom 876 were analyzed) in a 5:2 ratio to Crestor 40 mg or placebo once daily. Ultrasonograms of the carotid walls were used to determine the annualized rate of change per patient from baseline to two years in mean maximum cIMT of 12 measured segments. The estimated difference in the rate of change in the maximum cIMT analyzed over all 12 carotid artery sites between Crestor-treated patients and placebo-treated patients was -0.0145 mm/year (95% Confidence Interval CI -0.0196, -0.0093; p<0.0001).
The annualized rate of change from baseline for the placebo group was +0.0131 mm/year (p<0.0001). The annualized rate of change from baseline for the Crestor group was -0.0014 mm/year (p=0.32).
At an individual patient level in the Crestor group, 52.1% of patients demonstrated an absence of disease progression (defined as a negative annualized rate of change), compared to 37.7% of patients in the placebo group.
Crestor is effective in a wide variety of patient populations with hypercholesterolaemia, with and without hypertriglyceridaemia, regardless of race, sex or age and in special populations such as diabetics or patients with familial hypercholesterolaemia.
In the Justification for the Use of Statins in Primary Prevention: An Intervention Trial Evaluating Rosuvastatin (JUPITER) study, the effect of Crestor (rosuvastatin calcium) on the occurrence of major atherosclerotic cardiovascular (CV) disease events was assessed in 17,802 men (≥50 years) and women (≥60 years) who had no established cardiovascular disease, LDL-C levels <130 mg/dL (3.3 mmol/l) and hs-CRP levels ≥2 mg/L. The study population had an estimated baseline coronary heart disease risk of 11.3% over 10 years based on the Framingham risk criteria and included a high percentage of patients with additional risk factors such as hypertension (58%), low HDL-C levels (23%), cigarette smoking (16%) or a family history of premature CHD (12%). Study participants were randomly assigned to placebo (n=8901) or rosuvastatin 20 mg once daily (n=8901) and were followed for a mean duration of 2 years.
The primary endpoint was a composite endpoint consisting of the time-to-first occurrence of any of the following CV events: CV death, non-fatal myocardial infarction, non-fatal stroke, unstable angina or an arterial revascularization procedure.
Rosuvastatin significantly reduced the risk of CV events (252 events in the placebo group vs. 142 events in the rosuvastatin group) with a statistically significant (p<0.001) relative risk reduction of 44% (see figure). The benefit was apparent within the first 6 months of treatment. The risk reduction was consistent across multiple predefined population subsets based on assessments of age, sex, race, smoking status, family history of premature CHD, body mass index, LDL-C, HDL-C or hsCRP levels at the time of entry into the study. There was a statistically significant 48% reduction in the combined endpoint of CV death, stroke and myocardial infarction (HR: 0.52, 95% CI: 0.40-0.68, p<0.001), a 54% reduction in fatal or nonfatal myocardial infarction (HR: 0.46, 95% CI: 0.30-0.70) and a 48% reduction in fatal or nonfatal stroke. Total mortality was reduced 20% in the rosuvastatin group (HR: 0.80, 95% CI: 0.67-0.97, p=0.02). (See figure.)

The safety profile for subjects taking rosuvastatin 20 mg was generally similar to that of subjects taking placebo. There were 1.6% of rosuvastatin and 1.8% of placebo subjects who withdrew from the trial due to an adverse event, irrespective of treatment causality. The most common adverse reactions that led to treatment discontinuation were: myalgia (0.3% rosuvastatin, 0.2% placebo), abdominal pain (0.03% rosuvastatin, 0.02% placebo) and rash (0.03% rosuvastatin, 0.03% placebo). Adverse reactions reported in ≥2% of patients and at a rate greater than or equal to placebo were myalgia (7.6% rosuvastatin, 6.6% placebo), constipation (3.3% rosuvastatin, 3.0% placebo) and nausea (2.4% rosuvastatin, placebo, 2.3%).
In JUPITER, there was a statistically significant increase in the frequency of diabetes mellitus reported by investigators; 2.8% of patients in the rosuvastatin group and 2.3% of patients in the placebo group (HR: 1.27, 95% CI: 1.05-1.53, p=0.015). The difference between treatment groups (rosuvastatin versus placebo) in mean HbA1c change from baseline was approximately 0.1%.
Pediatric Patients with Heterozygous Familial Hypercholesterolemia: In a double blind, randomized, multi-center, placebo-controlled, 12-week study, 176 (97 male and 79 female) children and adolescents with heterozygous familial hypercholesterolemia were randomized to rosuvastatin 5, 10 or 20 mg or placebo daily. Patients ranged in age from 10 to 17 years (median age of 14 years) with approximately 30% of the patients 10 to 13 years and approximately 17%, 18%, 40%, and 25% at Tanner stages II, III, IV, and V, respectively. Females were at least 1 year post-menarche. Mean LDL-C at baseline was 233 mg/dL (range of 129 to 399). The 12-week double-blind phase was followed by a 40-week open-label dose-titration phase, where all patients (n=173) received 5 mg, 10 mg or 20 mg rosuvastatin daily.
Rosuvastatin significantly reduced LDL-C (primary end point), total cholesterol and ApoB levels at each dose compared to placebo. Results are shown in Table 4 as follows. (See Table 4.)

The following reductions in total cholesterol, LDL-C, TG, Total-C/HDL and increases in HDL-C have been observed in a dose-response study, and may serve as a guide to treatment of patients with mild to moderate hypercholesterolaemia. (See Table 6.)

The following medicinal product/combinations did not have a clinically significant effect on the AUC ratio of rosuvastatin at co-administration: Aleglitazar 0.3 mg 7 days dosing; Fenofibrate 67 mg 7 days TID dosing; Fluconazole 200 mg 11 days OD dosing; Fosamprenavir 700 mg/ritonavir 100 mg 8 days BID dosing; Ketoconazole 200 mg 7 days BID dosing; Rifampin 450 mg 7 days OD dosing; Silymarin 140 mg 5 days TID dosing.
Other medications: Concurrent use of fibrates may cause severe myositis and myoglobinuria.
Effect of rosuvastatin on co-administered medicinal products: Vitamin K antagonists: As with other HMG-CoA reductase inhibitors, the initiation of treatment or dosage up-titration of Crestor in patients treated concomitantly with vitamin K antagonists (e.g. warfarin or another coumarin anticoagulant) may result in an increase in International Normalised Ratio (INR). Discontinuation or down-titration of Crestor may result in a decrease in INR. In such situations, appropriate monitoring of INR is desirable.
Oral contraceptive/hormone replacement therapy (HRT): Concomitant use of Crestor and an oral contraceptive resulted in an increase in ethinyl estradiol and norgestrel AUC of 26% and 34%, respectively. These increased plasma levels should be considered when selecting oral contraceptive doses. There are no pharmacokinetic data available in subjects taking concomitant Crestor and HRT and therefore a similar effect cannot be excluded. However, the combination has been extensively used in women in clinical trials and was well tolerated.
Other medicinal products: Based on data from specific interaction studies no clinically relevant interaction with digoxin is expected.
Paediatric population: Interaction studies have only been performed in adults. The extent of interactions in the paediatric population is not known.
Caution For Usage
Incompatibilities: Not applicable.
Instructions for use and handling: No special requirements.
Storage
Do not store above 30°C. Store in the original package.
MIMS Class
Dyslipidaemic Agents
ATC Classification
C10AA07 - rosuvastatin ; Belongs to the class of HMG CoA reductase inhibitors. Used in the treatment of hyperlipidemia.