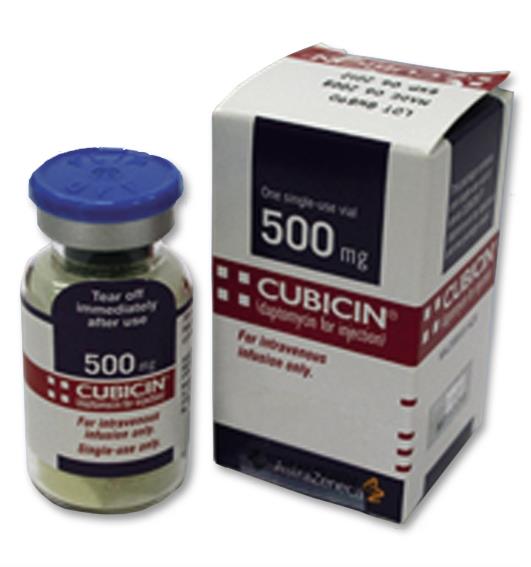 Undesirable Effects Reported Post-Marketing: The following adverse drug reactions, not listed previously, have been reported during worldwide post-marketing experience: Immune system disorders: Hypersensitivity reactions, including, but not limited to, anaphylaxis, angioedema, drug rash with eosinophilia and systemic symptoms (DRESS), and pulmonary eosinophilia.
Infections and infestations: Clostridium difficile-associated diarrhea.
Investigations: Myoglobin increased.
Musculoskeletal, connective tissue, and bone disorders: Rhabdomyolysis.
Nervous system disorders: Peripheral neuropathy.
Respiratory, thoracic, and mediastinal disorders: Cough, Eosinophilic pneumonia, Organizing pneumonia.
Skin and subcutaneous tissue disorders: Vesiculobullous rash with or without mucous membrane involvement; Acute generalized exanthematous pustulosis.
View ADR Monitoring Form
Drug Interactions
Interactions with Other Medicinal Products: CUBICIN was studied in human drug-drug interaction studies with aztreonam, tobramycin, warfarin, simvastatin, and probenecid. Daptomycin had no effect on the pharmacokinetics of warfarin or probenecid, nor did these drugs alter the pharmacokinetics of daptomycin. The pharmacokinetics of daptomycin were not significantly altered by aztreonam.
Experience with the concomitant administration of CUBICIN and warfarin is limited. Studies of CUBICIN with anticoagulants other than warfarin have not been conducted. Monitor anticoagulant activity in patients receiving CUBICIN and warfarin for the first several days after therapy with CUBICIN is initiated.
Experience with the coadministration of HMG-CoA reductase inhibitors and CUBICIN in patients is limited; therefore, consider suspending use of HMG-CoA reductase inhibitors temporarily in patients receiving CUBICIN.
Although small changes in the pharmacokinetics of daptomycin and tobramycin were observed during coadministration by IV infusion over a 30-minute period using a CUBICIN dose of 2 mg/kg, the changes were not statistically significant. The interaction between daptomycin and tobramycin with a clinical dose of CUBICIN is unknown. Caution is warranted when CUBICIN is coadministered with tobramycin.
Drug-Laboratory Test Interactions: Clinically relevant plasma concentrations of daptomycin have been observed to cause a significant concentration-dependent false prolongation of prothrombin time (PT) and elevation of International Normalized Ratio (INR) when certain recombinant thromboplastin reagents are utilized for the assay. The possibility of an erroneously elevated PT/INR result due to interaction with a recombinant thromboplastin reagent may be minimized by drawing specimens for PT or INR testing near the time of trough plasma concentrations of daptomycin. However, sufficient daptomycin concentrations may be present at trough to cause interaction.
If confronted with an abnormally high PT/INR result in a patient being treated with CUBICIN, it is recommended that clinicians: Repeat the assessment of PT/INR, requesting that the specimen be drawn just prior to the next CUBICIN dose (i.e., at trough concentration). If the PT/INR value obtained at trough remains substantially elevated above what would otherwise be expected, consider evaluating PT/INR utilizing an alternative method.
Evaluate for other causes of abnormally elevated PT/INR results.
Caution For Usage
Incompatibilities: CUBICIN is not compatible with dextrose-containing diluents.
CUBICIN should not be used in conjunction with ReadyMED elastomeric infusion pumps (Cardinal Health, Inc.). Stability studies of CUBICIN solutions stored in ReadyMED elastomeric infusion pumps identified an impurity (2-mercaptobenzothiazole) leaching from this pump system into the CUBICIN solution.
Because only limited data are available on the compatibility of CUBICIN with other IV substances, additives and other medications should not be added to CUBICIN single-use vials or infusion bags, or infused simultaneously through the same IV line. If the same IV line is used for sequential infusion of different drugs, the line should be flushed with a compatible intravenous solution before and after infusion with CUBICIN.
Storage
Store original packages at refrigerated temperatures, 2 to 8°C (36 to 46°F); avoid excessive heat.
Shelf-Life: Three years from the date of manufacture. After reconstitution: Chemical and physical stability of the reconstituted solution in the vial has been demonstrated for 12 hours at 25°C and up to 48 hours if stored under refrigeration (2 to 8°C). Chemical and physical stability of the diluted solution in infusion bags has been established as 12 hours at 25°C and 48 hours if stored under refrigeration at 2 to 8°C. The combined storage time (reconstituted solution in vial and diluted solution in infusion bag) must not exceed 12 hours at 25°C or 48 hours at 2 to 8°C.
MIMS Class
Other Antibiotics
ATC Classification
J01XX09 - daptomycin ; Belongs to the class of other antibacterials. Used in the systemic treatment of infections.