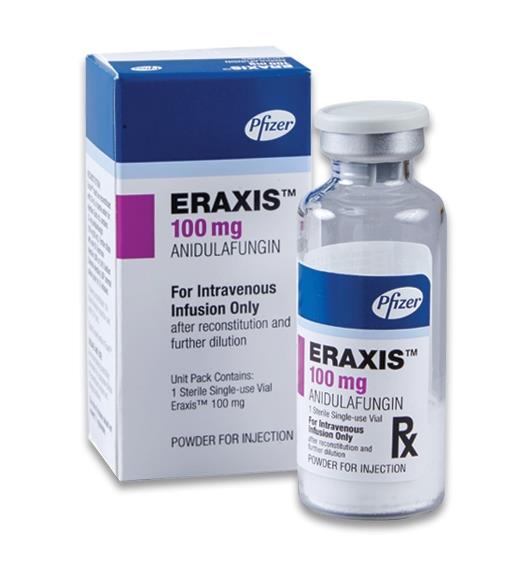 Pharmacokinetics: The pharmacokinetics of anidulafungin have been characterized by a rapid distribution half-life (0.5-1 hour) and a volume of distribution of 30-50 L that is similar to total body fluid volume. Anidulafungin is extensively bound (>99%) to human plasma proteins.
Biotransformation: Hepatic metabolism of anidulafungin has not been observed. Anidulafungin is not clinically relevant substrate, inducer, or inhibitor of cytochrome P450 isoenzymes. It is unlikely that anidulafungin will have clinically relevant effects on the metabolism of drugs metabolized by cytochrome P450 isoenzymes.
Anidulafungin undergoes slow chemical degradation at physiologic temperature and pH to a ring-opened peptide that lacks antifungal activity. The degradation half-life of anidulafungin under physiologic conditions is approximately 24 hours. In vivo, the ring-opened product is subsequently converted to peptidic degradants and eliminated mainly through biliary excretion.
Elimination: The clearance of anidulafungin is about 1 L/h. Anidulafungin has a predominant elimination half-life of approximately 24 hours that characterizes the majority of the plasma concentration-time profile and a terminal half-life of 40-50 hours that characterizes the terminal elimination phase of the profile.
In a single-dose clinical study, radiolabeled (14C) anidulafungin (~88 mg) was administered to healthy subjects. Approximately 30% of the administered radioactive dose was eliminated in the faeces over 9 days, of which less than 10% was intact drug. Less than 1% of the administered radioactive dose was excreted in the urine. Anidulafungin concentrations fell below the lower limits of quantitation 6 days post-dose. Negligible amounts of drug-derived radioactivity were recovered in blood, urine, and faeces 8 weeks post-dose.
Linearity: Anidulafungin displays linear pharmacokinetics across a wide range of once daily doses (15-130 mg).
Special Populations: Patients with fungal infections: The pharmacokinetics of anidulafungin in patients with fungal infections are similar to those observed in healthy subjects based on population pharmacokinetic analyses. With the 200/100 mg daily dose regimen at an infusion rate of 1 mg/min, the steady state Cmax and trough concentrations Cmin could reach approximately 7 and 3 mg/L, respectively, with an average steady state AUC of approximately 110 mg·h/L.
Weight: Though weight was identified as a source of variability in clearance in the population pharmacokinetic analysis, weight has little clinical relevance on the pharmacokinetics of anidulafungin.
Gender: Plasma concentrations of anidulafungin in healthy men and women were similar. In multiple-dose patient studies, drug clearance was slightly faster (approximately 22%) in men.
Elderly: The population pharmacokinetic analysis showed that median clearance differed slightly between the elderly group (patients ≥65, median CL = 1.07 L/h) and the non-elderly group (patients <65, median CL = 1.22 L/h), however, the range of clearance was similar.
Ethnicity: Anidulafungin pharmacokinetics were similar among Caucasian, Blacks, Asians, and Hispanics.
HIV Positivity: Dosage adjustments are not required based on HIV positivity, irrespective of concomitant anti-retroviral therapy.
Hepatic Insufficiency: Anidulafungin is not hepatically metabolised. Anidulafungin pharmacokinetics were examined in subjects with Child-Pugh class A, B or C hepatic insufficiency. Anidulafungin concentrations were not increased in subjects with any degree of hepatic insufficiency. Although a slight decrease in AUC was observed in patients with Child-Pugh C hepatic insufficiency, the decrease was within the range of population estimates noted for healthy subjects.
Renal Insufficiency: Anidulafungin has negligible renal clearance (<1%). In a clinical study of subjects with mild, moderate, severe or end stage (dialysis-dependent) renal insufficiency, anidulafungin pharmacokinetics were similar to those observed in subjects with normal renal function. Anidulafungin is not dialyzable and may be administered without regard to the timing of hemodialysis.
Pediatric: The pharmacokinetics of anidulafungin after daily doses were investigated in 24 immunocompromised paediatric (2 to 11 years old) and adolescent (12 to 17 years old) patients with neutropenia. The steady state was achieved on the first day after a loading dose (twice the maintenance dose), and the steady state Cmax and AUCss increase in a dose-proportional manner. The systemic exposures following the daily maintenance doses, 0.75 and 1.5 mg/kg/day in patients aged 2 to 17 years old were comparable to those observed in adults following 50 and 100 mg/day, respectively.
Toxicology: Preclinical safety data: Non-clinical data reveal no special hazards for humans based on conventional studies of safety pharmacology, acute toxicity, repeated dose toxicity, and toxicity to reproduction. In 3 months studies, evidence of liver toxicity, including elevated enzymes and morphologic alterations, was observed in both rats and monkeys at doses 4 to 6-fold higher than the anticipated clinical therapeutic exposure. In vitro and in vivo genotoxicity studies with anidulafungin provided no evidence of genotoxic potential. Long-term studies in animals have not been conducted to evaluate the carcinogenic potential of anidulafungin.
Administration of anidulafungin to rats did not indicate any effects on reproduction, including male and female fertility.
Anidulafungin crossed the placental barrier in rats and was detected in fetal plasma. The potential risk to the human fetus is unknown.
Anidulafungin was found in the milk of lactating rats. It is not known whether anidulafungin is excreted in human milk.
Anidulafungin did not produce any drug-related development toxicity in rats at the highest dose of 20 mg/kg/day, a dose equivalent to 2 times the proposed therapeutic maintenance dose of 100 mg on the basis of relative body surface area. Developmental effects observed in rabbits (slightly reduced fetal weights) occurred in the high dose group, a dose that also produced maternal toxicity.