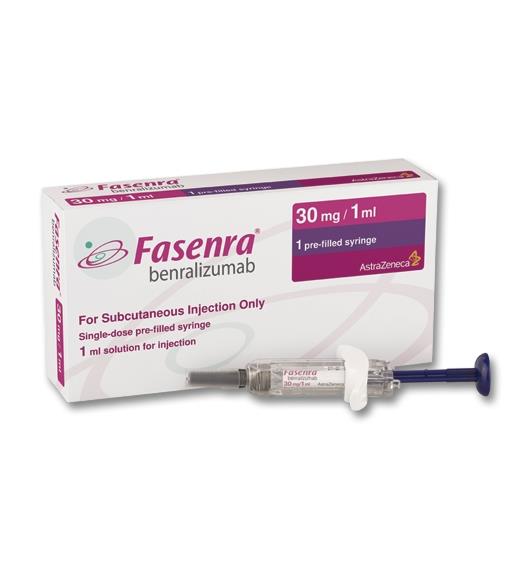 Exacerbation results in patients with baseline blood eosinophil counts less than 300 cells/μL who were taking high-dose ICS are presented in Table 5.
The time to first exacerbation was longer for the patients receiving FASENRA compared with placebo in Trials 1 and 2 (Figure 1). (See Figure 1.)

Across Trials 1 and 2 combined, there was a numerically greater exacerbation rate reduction with increasing baseline blood eosinophils. Analyses also showed greater improvements in FEV1 in patients with increasing baseline blood eosinophil counts.
OCS Dose Reduction Trial: Trial 3 evaluated the effect of FASENRA on reducing the use of maintenance oral corticosteroids. The primary endpoint was percent reduction from baseline of the final OCS dose during Weeks 24 to 28, while maintaining asthma control. Compared to placebo, patients receiving FASENRA achieved greater reductions in daily maintenance oral corticosteroid dose, while maintaining asthma control. Reductions of 50% or higher in the OCS dose were observed in 48 (66%) patients receiving FASENRA compared to those receiving placebo 28 (37%). The proportion of patients with a mean final dose less than or equal to 5 mg at Weeks 24 to 28 were 59% for FASENRA and 33% for placebo (odds ratio 2.74, 95% CI: 1.41, 5.31). At the same time, patients treated with FASENRA maintained asthma control as reflected by improved lung function, reduced symptoms, and a need for rescue medication. Only patients with an optimized baseline OCS dose of 12.5 mg or less were eligible to achieve a 100% reduction in OCS dose during the study. Of those patients, 52.4% (22 of 42) receiving FASENRA and 19% (8 of 42) on placebo achieved a 100% reduction in OCS dose. Table 6 summarizes the study results for Trial 3. Additionally, the percent reduction in exacerbations and exacerbations requiring hospitalization and/or emergency room visits for patients receiving FASENRA compared to placebo were 70% (rate 0.54 versus 1.83, rate ratio 0.30, 95% CI: 0.17, 0.53) and 93% (rates 0.02 versus 0.32, rate ratio 0.07, 95% CI: 0.01, 0.63), respectively. (See Table 6.)

Lung function, asthma symptom score, ACQ-6 and AQLQ(S)+12 were also assessed in Trial 3 and showed results similar to those in Trials 1 and 2.
Long term Extension Trial: The long-term efficacy and safety of FASENRA was evaluated in a double-blind, randomized, parallel group, Phase 3, 56 week extension trial BORA (Trial 4). The trial enrolled 2,123 adults and adolescent patients (aged 12 years and older) from Trials 1, 2 and 3. Trial 4 assessed the long-term effect of FASENRA on annual exacerbation rate, lung function, ACQ-6, AQLQ(S)+12 and maintenance of OCS reduction at the 2 dosing regimens studied in the predecessor studies.
At the recommended dosing regimen, the reduction in annual rate of exacerbations observed in the placebo-controlled predecessor Trials 1 and 2 (in patients with baseline blood eosinophil counts of greater than or equal to 300 cells/μL who were taking high-dose ICS) was maintained over the second year of treatment (Table 7). In patients who received FASENRA in predecessor Trials 1 and 2, 73% were exacerbation free in the extension Trial 4. (See Table 7.)

Efficacy in Trial 4 was also evaluated in patients with baseline blood eosinophil counts less than 300 cells/μl and was consistent with Trials 1 and 2.
Maintenance of the reduction in daily OCS dose was also observed over the extension trial in patients enrolled from Trial 3 (Figure 3). (See Figure 3.)

Description of selected adverse reaction: Injection site reactions: In placebo-controlled studies, injection site reactions (e.g., pain, erythema, pruritus, papule) occurred at a rate of 2.2% in patients treated with the indicated benralizumab dose compared with 1.9% in patients treated with placebo.
Summary of post-marketing data: The following adverse reactions have been identified during post approval use of FASENRA. It is generally not possible to reliably determine the frequency because such reactions have been reported spontaneously from a population of uncertain size and therefore represent reporting rates. The frequency of these adverse reactions is therefore 'not known' (cannot be estimated from available data).
Immune system disorders: Anaphylaxis (defined by the grouped preferred terms: 'Anaphylactic reaction', 'Angioedema').
Long-term safety: In a 56-week double blind, randomized, parallel-group extension trial in patients with asthma from Trials 1, 2 and 3, 842 patients were treated with FASENRA at the recommended dose and remained in the trial. The overall adverse event profile was similar to the asthma trials described previously.
View ADR Monitoring Form
Drug Interactions
In a randomized, double-blind parallel-group study of 103 patients aged between 12 and 21 years with severe asthma, the humoral antibody responses induced by seasonal influenza virus vaccination were similar between benralizumab 30 mg and placebo.
Cytochrome P450 enzymes, efflux pumps and protein-binding mechanisms are not involved in the clearance of benralizumab. There is no evidence of IL-5Rα expression on hepatocytes. Eosinophil depletion does not produce chronic systemic alterations of proinflammatory cytokines.
Caution For Usage
Incompatibilities: In the absence of compatibility studies, this medicinal product must not be mixed with other medicinal products.
Instructions for use, handling and disposal: Do not shake. Do not use if frozen.
Instructions for administration: Prior to administration, warm FASENRA by leaving carton at room temperature. This generally takes 30 minutes. Administer within 14 days or discard into sharps container.
Instructions for Prefilled Syringe with Needle Safety Guard: Do not touch the needle guard activation clips to prevent premature activation of the needle safety guard.
1. Grasp the syringe body, not the plunger, to remove prefilled syringe from the tray. Check the expiration date on the syringe. Visually inspect FASENRA for particulate matter and discoloration prior to administration. FASENRA is clear, colourless to yellow, and may contain translucent or white to off-white particles. Do not use FASENRA if liquid is cloudy, discoloured, or if it contains large particles or foreign particulate matter. The syringe may contain a small air bubble; this is normal. Do not expel the air bubble prior to administration.
2. Do not remove needle cover until ready to inject. Hold the syringe body and remove the needle cover by pulling straight off. Do not hold the plunger or plunger head while removing the needle cover or the plunger may move. If prefilled syringe is damaged or contaminated (for example, dropped without needle cover in place), discard and use a new prefilled syringe.
3. Gently pinch the skin and insert the needle at the recommended injection site (i.e., upper arm, thighs, or abdomen).
4. Inject all of the medication by pushing in the plunger all the way until the plunger head is completely between the needle guard activation clips. This is necessary to activate the needle guard.
5. After injection, maintain pressure on the plunger head and remove the needle from the skin. Release pressure on the plunger head to allow the needle guard to cover the needle. Do not re-cap the prefilled syringe.
6. Discard the used syringe into a sharps container.
Storage
Store in a refrigerator (2°C - 8°C). FASENRA may be kept at room temperature up to 25°C for a maximum of 14 days. After removal from the refrigerator, FASENRA must be used within 14 days or discarded. Store the prefilled syringe in the original package in order to protect from light. Do not freeze. Do not expose to heat.
MIMS Class
Antiasthmatic & COPD Preparations
ATC Classification
R03DX10 - benralizumab ; Belongs to the class of other systemic drugs used in the treatment of obstructive airway diseases.