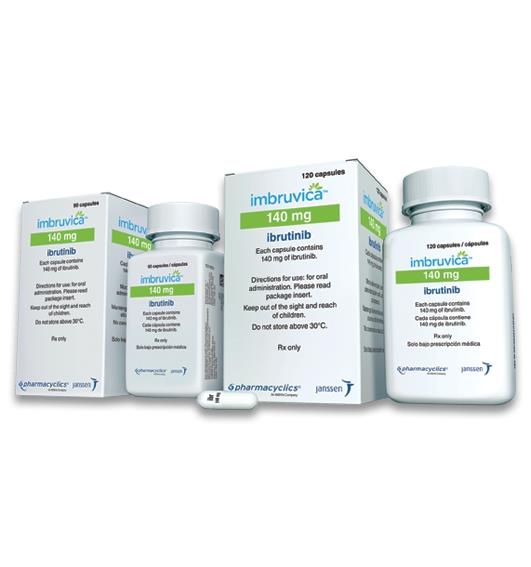 Concise Prescribing Info Full Prescribing Info Contents Description Action Indications/Uses Dosage/Direction for Use Overdosage Contraindications Special Precautions Use In Pregnancy & Lactation Adverse Reactions Drug Interactions Caution For Usage Storage MIMS Class ATC Classification Regulatory Classification Presentation/Packing
Full Prescribing Info
Contents
Ibrutinib.
Description
Each hard capsule contains 140 mg of ibrutinib.
Excipients/Inactive Ingredients: Capsule content: croscarmellose sodium, magnesium stearate, microcrystalline cellulose, sodium laurilsulfate.
Capsule shell: gelatin, titanium dioxide (E171).
Printing ink: shellac, iron oxide black (E172), propylene glycol.
Action
Pharmacotherapeutic group: Antineoplastic agents, protein kinase inhibitors. ATC code: L01XE27.
Pharmacology: Pharmacodynamics: Mechanism of action: Ibrutinib is a potent, small-molecule inhibitor of Bruton's tyrosine kinase (BTK). Ibrutinib forms a covalent bond with a cysteine residue (Cys-481) in the BTK active site, leading to sustained inhibition of BTK enzymatic activity. BTK, a member of the Tec kinase family, is an important signalling molecule of the B-cell antigen receptor (BCR) and cytokine receptor pathways. The BCR pathway is implicated in the pathogenesis of several B-cell malignancies, including MCL, diffuse large B-cell lymphoma (DLBCL), follicular lymphoma, and CLL. BTK's pivotal role in signalling through the B-cell surface receptors results in activation of pathways necessary for B-cell trafficking, chemotaxis and adhesion. Preclinical studies have shown that ibrutinib effectively inhibits malignant B-cell proliferation and survival in vivo as well as cell migration and substrate adhesion in vitro.
Lymphocytosis: Upon initiation of treatment, a reversible increase in lymphocyte counts (i.e., ≥ 50% increase from baseline and an absolute count > 5,000/mcL), often associated with reduction of lymphadenopathy, has been observed in about three fourths of patients with CLL treated with IMBRUVICA. This effect has also been observed in about one third of patients with relapsed or refractory MCL treated with IMBRUVICA. This observed lymphocytosis is a pharmacodynamic effect and should not be considered progressive disease in the absence of other clinical findings. In both disease types, lymphocytosis typically occurs during the first month of IMBRUVICA therapy and typically resolves within a median of 8.0 weeks in patients with MCL and 14 weeks in patients with CLL. A large increase in the number of circulating lymphocytes (e.g., > 400,000/mcL) has been observed in some patients.
In vitro platelet aggregation: In an in vitro study, ibrutinib demonstrated inhibition of collagen-induced platelet aggregation. Ibrutinib did not show meaningful inhibition of platelet aggregation using other agonists of platelet aggregation.
Effect on QT/QTc interval and cardiac electrophysiology: The effect of ibrutinib on the QTc interval was evaluated in 20 healthy male and female subjects in a randomised, double-blind thorough QT study with placebo and positive controls. At a supratherapeutic dose of 1680 mg, ibrutinib did not prolong the QTc interval to any clinically relevant extent. The largest upper bound of the 2-sided 90% CI for the baseline adjusted mean differences between ibrutinib and placebo was below 10 ms. In this same study, a concentration dependent shortening in the QTc interval was observed (-5.3 ms [90% CI: -9.4, -1.1] at a Cmax of 719 ng/mL following the supratherapeutic dose of 1680 mg).
Clinical efficacy and safety: MCL: The safety and efficacy of IMBRUVICA in patients with relapsed or refractory MCL were evaluated in a single open-label, multi-center phase 2 study (PCYC-1104-CA) of 111 patients. The median age was 68 years (range: 40 to 84 years), 77% were male and 92% were Caucasian. Patients with Eastern Cooperative Oncology Group (ECOG) performance status of 3 or greater were excluded from the study. The median time since diagnosis was 42 months, and median number of prior treatments was 3 (range: 1 to 5 treatments), including 35% with prior high-dose chemotherapy, 43% with prior bortezomib, 24% with prior lenalidomide, and 11% with prior autologous or allogeneic stem cell transplant. At baseline, 39% of patients had bulky disease (≥ 5 cm), 49% had high-risk score by Simplified MCL International Prognostic Index (MIPI), and 72% had advanced disease (extranodal and/or bone marrow involvement) at screening.
IMBRUVICA was administered orally at 560 mg once daily until disease progression or unacceptable toxicity. Tumour response was assessed according to the revised International Working Group (IWG) for non-Hodgkin's lymphoma (NHL) criteria. The primary endpoint in this study was investigator-assessed overall response rate (ORR). Responses to IMBRUVICA are shown in Table 1. (See Table 1.)

The efficacy data was further evaluated by an Independent Review Committee (IRC) demonstrating an ORR of 69%, with a 21% complete response (CR) rate and a 48% partial response (PR) rate. The IRC estimated median DOR was 19.6 months.
The overall response to IMBRUVICA was independent of prior treatment including bortezomib and lenalidomide or underlying risk/prognostic factors, bulky disease, gender or age.
The safety and efficacy of IMBRUVICA were demonstrated in a randomised phase 3, open-label, multicenter study including 280 patients with MCL who received at least one prior therapy (Study MCL3001). Patients were randomised 1:1 to receive either IMBRUVICA orally at 560 mg once daily for 21 days or temsirolimus intravenously at 175 mg on Days 1, 8, 15 of the first cycle followed by 75 mg on Days 1, 8, 15 of each subsequent 21-day cycle. Treatment on both arms continued until disease progression or unacceptable toxicity. The median age was 68 years (range, 34; 88 years), 74% were male and 87% were Caucasian. The median time since diagnosis was 43 months, and median number of prior treatments was 2 (range: 1 to 9 treatments), including 51% with prior high-dose chemotherapy, 18% with prior bortezomib, 5% with prior lenalidomide, and 24% with prior stem cell transplant. At baseline, 53% of patients had bulky disease (≥ 5 cm), 21% had high-risk score by Simplified MIPI, 60% had extranodal disease and 54% had bone marrow involvement at screening.
Progression-free survival (PFS) was assessed by IRC according to the revised International Working Group (IWG) for non-Hodgkin's lymphoma (NHL) criteria. Efficacy results for Study MCL3001 are shown in Table 2 and the Kaplan-Meier curve for PFS in Figure 1. (See Table 2.)

CLL: Patients previously untreated for CLL: A randomised, multicenter, open-label phase 3 study (PCYC-1115-CA) of IMBRUVICA versus chlorambucil was conducted in patients with treatment-naïve CLL who were 65 years of age or older. Patients between 65 and 70 years of age were required to have at least one comorbidity that precluded the use of frontline chemo-immunotherapy with fludarabine, cyclophosphamide, and rituximab. Patients (n = 269) were randomised 1:1 to receive either IMBRUVICA 420 mg daily until disease progression or unacceptable toxicity, or chlorambucil at a starting dose of 0.5 mg/kg on days 1 and 15 of each 28-day cycle for a maximum of 12 cycles, with an allowance for intrapatient dose increases up to 0.8 mg/kg based on tolerability. After confirmed disease progression, patients on chlorambucil were able to crossover to ibrutinib.
The median age was 73 years (range, 65 to 90 years), 63% were male, and 91% were Caucasian. Ninety one percent of patients had a baseline ECOG performance status of 0 or 1 and 9% had an ECOG performance status of 2. The study enrolled 269 patients with CLL. At baseline, 45% had advanced clinical stage (Rai Stage III or IV), 35% of patients had at least one tumor ≥ 5 cm, 39% with baseline anemia, 23% with baseline thrombocytopenia, 65% had elevated β2 microglobulin > 3500 mcg/L, 47% had a CrCL < 60 ml/min, and 20% of patients presented with del11q.
Progression free survival (PFS) as assessed by IRC according to International Workshop on CLL (IWCLL) criteria indicated an 84% statistically significant reduction in the risk of death or progression in the IMBRUVICA arm. Efficacy results for Study PCYC-1115-CA are shown in Table 3 and the Kaplan-Meier curves for PFS and OS are shown in Figures 2 and 3, respectively.
There was a statistically significant sustained platelet or hemoglobin improvement in the ITT population in favor of ibrutinib versus chlorambucil. In patients with baseline cytopenias, sustained hematologic improvement was: platelets 77.1% versus 42.9%; hemoglobin 84.3% versus 45.5% for ibrutinib and chlorambucil respectively. (See Table 3 and Figures 2 and 3.)

The efficacy was similar across all of the subgroups examined, including in patients with and without deletion 17p, a pre-specified stratification factor (Table 5). (See Table 5.)

The Kaplan-Meier curve for PFS is shown in Figure 4. (See Figure 4.)