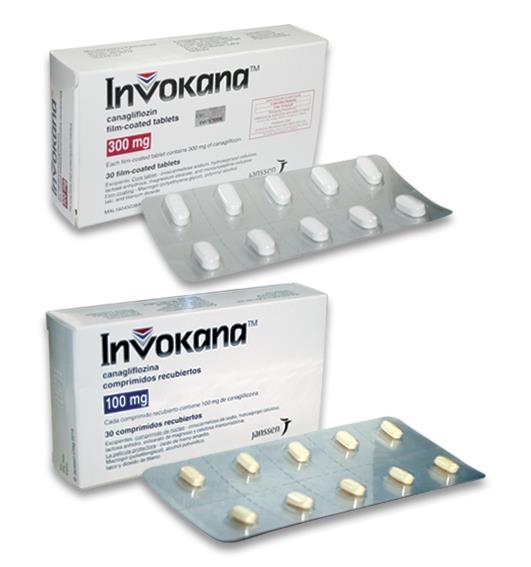 Concise Prescribing Info Full Prescribing Info Contents Description Action Indications/Uses Dosage/Direction for Use Overdosage Contraindications Special Precautions Use In Pregnancy & Lactation Adverse Reactions Drug Interactions Caution For Usage Storage MIMS Class ATC Classification Regulatory Classification Presentation/Packing
Full Prescribing Info
Action
Pharmacotherapeutic Group: Drugs used in diabetes, other blood glucose lowering drugs, excluding insulins. ATC Code: A10BX11.
Pharmacology: Pharmacodynamics: Mechanism of Action: The SGLT2 transporter, expressed in the proximal renal tubules, is responsible for the majority of the reabsorption of filtered glucose from the tubular lumen. Patients with diabetes have been shown to have elevated renal glucose reabsorption which may contribute to persistent elevated blood glucose concentrations. Canagliflozin is an orally-active inhibitor of SGLT2. By inhibiting SGLT2, canagliflozin reduces reabsorption of filtered glucose and lowers the renal threshold for glucose (RTG), and thereby increases UGE, lowering elevated plasma glucose concentrations by this insulin-independent mechanism in patients with type 2 diabetes. The increased UGE with SGLT2 inhibition also translates to an osmotic diuresis, with the diuretic effect leading to a reduction in systolic blood pressure; the increase in UGE results in a loss of calories and therefore a reduction in body weight, as has been demonstrated in studies of patients with type 2 diabetes.
Canagliflozin's action to increase UGE directly lowering plasma glucose is independent of insulin. Improvement in homeostasis model assessment for beta-cell function (HOMA beta-cell) and improved beta-cell insulin secretion response to a mixed-meal challenge has been observed in clinical studies with canagliflozin.
In phase 3 studies, pre-meal administration of canagliflozin 300 mg provided a greater reduction in postprandial glucose excursion than observed with the 100 mg dose. This effect at the 300 mg dose of canagliflozin may, in part, be due to local inhibition of intestinal SGLT1 (an important intestinal glucose transporter) related to transient high concentrations of canagliflozin in the intestinal lumen prior to medicinal product absorption (canagliflozin is a low potency inhibitor of the SGLT1 transporter). Studies have shown no glucose malabsorption with canagliflozin.
Pharmacodynamic Effects: Following single and multiple oral doses of canagliflozin to patients with type 2 diabetes, dose-dependent decreases in RTG and increases in UGE were observed. From a starting value of RTG of approximately 13 mmol/L, maximal suppression of 24-hour mean RTG was seen with the 300 mg daily dose to approximately 4 mmol/L to 5 mmol/L in patients with type 2 diabetes in phase 1 studies, suggesting a low risk for treatment-induced hypoglycaemia. The reductions in RTG led to increased UGE in subjects with type 2 diabetes treated with either 100 mg or 300 mg of canagliflozin ranging from 77 g/day to 119 g/day across the phase 1 studies; the UGE observed translates to a loss of 308 kcal/day to 476 kcal/day. The reductions in RTG and increases in UGE were sustained over a 26-week dosing period in patients with type 2 diabetes. Moderate increases (generally <400 mL to 500 mL) in daily urine volume were seen that attenuated over several days of dosing. Urinary uric acid excretion was transiently increased by canagliflozin (increased by 19% compared to baseline on day 1 and then attenuating to 6% on day 2 and 1% on day 13). This was accompanied by a sustained reduction in serum uric acid concentration of approximately 20%.
In a single-dose study in patients with type 2 diabetes, treatment with 300 mg before a mixed meal delayed intestinal glucose absorption and reduced postprandial glucose through both a renal and a non-renal mechanism.
Clinical Efficacy and Safety: A total of 10,285 patients with type 2 diabetes participated in nine double-blind, controlled clinical efficacy and safety studies conducted to evaluate the effects of Invokana on glycaemic control. The racial distribution was 72% White, 16% Asian, 4% Black, and 8% other groups. 16% of patients were Hispanic. Approximately 58% of patients were male. Patients had an overall mean age of 59.6 years (range 21 years to 96 years), with 3,082 patients ≥65 years of age and 510 patients ≥75 years of age. 58% of patients had a body mass index (BMI) ≥30 kg/m2. In the clinical development programme, 1,085 patients with a baseline eGFR 30 mL/min/1.73 m2 to <60 mL/min/1.73 m2 were evaluated.
Placebo-Controlled Studies: Canagliflozin was studied as monotherapy, dual therapy with metformin, dual therapy with a sulphonylurea, triple therapy with metformin and a sulphonylurea, triple therapy with metformin and pioglitazone, and as an add-on therapy with insulin (see Table 1). In general, canagliflozin produced clinically and statistically significant (p<0.001) results relative to placebo in glycaemic control, including HbA1c, the percentage of patients achieving HbA1c <7%, change from baseline fasting plasma glucose (FPG), and 2-hour postprandial glucose (PPG). In addition, reductions in body weight and systolic blood pressure relative to placebo were observed. (See Table 1).