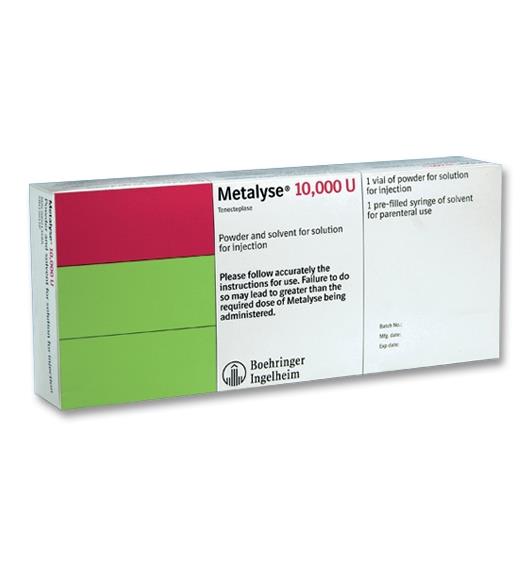 The observed incidence of major and of minor non-ICH bleeds were similar in both groups: (See Table 2).

None of the differences between groups displayed in the above tables reached the threshold of statistical significance except for the incidence of total strokes and ICH, however the incidences in the pharmaco-invasive group were as observed in previous clinical studies.
After the dose reduction of tenecteplase by half in patients ≥75 years there was no further intracranial hemorrhage (0 of 97 patients) (95% CI: 0.0- 3.7) versus 8.1% (3 of 37 patients) (95% CI: 1.7- 21.9) prior to the dose reduction. The bounds of the confidence interval of the observed incidences prior and after dose reduction are overlapping.
In patients ≥75 years the observed incidence of the primary efficacy composite end point for the pharmaco-invasive strategy and primary PCI were as follows: before dose reduction 11/37 (29.7%) (95% CI: 15.9- 47.0) vs. 10/32 (31.3%) (95% CI: 16.1-50.0), after dose reduction: 25/97 (25.8%) (95% CI: 17.4-35.7) vs. 25/88 (24.8%) (95% CI: 19.3-39.0). In both groups the bounds of the confidence interval of the observed incidences prior and post dose reduction are overlapping.
Pharmacokinetics: Absorption and Distribution: Tenecteplase is an intravenously administered, recombinant protein that activates plasminogen. Following i.v. bolus administration of 30 mg tenecteplase in patients with acute myocardial infarction, the initially estimated tenecteplase plasma concentration was 6.45 ± 3.60 μg/mL (mean ±SD). The distribution phase represents 31% ± 22% to 69% ± 15% (mean ±SD) of the total AUC following the administration of doses ranges from 5 to 50 mg.
Data on tissue distribution were obtained in studies with radioactively labelled tenecteplase in rats. The main organ to which tenecteplase distributed was the liver. It is not known whether and to which extent tenecteplase binds to plasma proteins in humans. The mean residence time (MRT) in the body is approximately 1 h and the mean (±SD) volume of distribution at the steady-state (Vss) ranged from 6.3 ± 2 L to 15 ± 7 L.
Metabolism: Tenecteplase is cleared from the circulation by binding to specific receptors in the liver followed by catabolism to small peptides. Binding to hepatic receptors is, however, reduced compared to native t-PA, resulting in a prolonged half-life.
After single intravenous bolus injection of tenecteplase in patients with acute myocardial infarction, tenecteplase antigen exhibits biphasic elimination from plasma. There is no dose dependence of tenecteplase clearance in the therapeutic dose range. The initial, dominant half-life is 24 ± 5.5 (mean ± SD) min, which is 5 times longer than native t-PA.
The terminal half-life is 129 ± 87 min, and plasma clearance is 119 ± 49 ml/min. Increasing body weight resulted in a moderate increase of tenecteplase clearance, and increasing age resulted in a slight decrease of clearance. Women exhibit in general lower clearance than men, but this can be explained by the generally lower body weight of women.
Linearity/Non-Linearity: The dose linearity analysis based on AUC suggested that tenecteplase exhibits non-linear pharmacokinetics in the dose range studied, i.e. 5 to 50 mg.
Special Populations: Renal and Hepatic Impairment: Because elimination of tenecteplase is through the liver, it is not expected that renal dysfunction will affect the pharmacokinetics of METALYSE. This is also supported by animal data. However, the effect of renal and hepatic dysfunction on pharmacokinetics of tenecteplase in humans has not been specifically investigated.