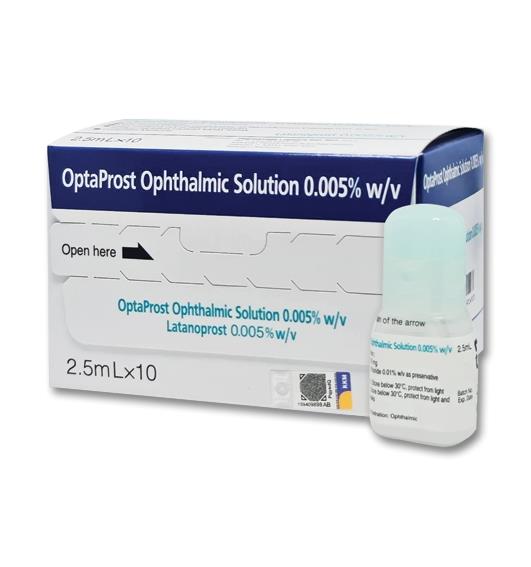 Concise Prescribing Info Full Prescribing Info Contents Description Action Indications/Uses Dosage/Direction for Use Overdosage Contraindications Special Precautions Use In Pregnancy & Lactation Adverse Reactions Drug Interactions Caution For Usage Storage MIMS Class ATC Classification Regulatory Classification Presentation/Packing
The information highlighted (if any) are the most recent updates for this brand.
Full Prescribing Info
Action
Pharmacology: Pharmacodynamics: Latanoprost is a prostaglandin F 2-alpha analogue and a selective FP prostanoid receptor agonist. It reduces intraocular pressure by increasing the outflow of aqueous humor. Studies suggest that the main mechanism of action is increased uveoscleral outflow.
Pharmacokinetics: Absorption: Latanoprost is absorbed through the cornea where the isopropyl ester prodrug is hydrolyzed to the acid form to become biologically active.
The peak concentration in the aqueous humor is reached about two hours after topical administration.
Distribution: The distribution volume in humans is 0.16 ± 0.02 L/kg. The acid of latanoprost can be measured in aqueous humor during the first four hours, and in plasma only during the first hour after local administration.
Metabolism: Latanoprost, an isopropyl ester prodrug, is hydrolyzed by esterases in the cornea to the biologically active acid. The active acid of latanoprost reaching the systemic circulation is primarily metabolized by the liver to the 1,2-dinor and 1,2,3,4-tetranor metabolites via fatty acid β-oxidation.
Elimination: Following hepatic β-oxidation, the metabolites are mainly eliminated via the kidneys.
Approximately 88% and 98% of the administered dose is recovered in the urine after topical and intravenous dosing, respectively. The elimination half life, t1/2 =17min.