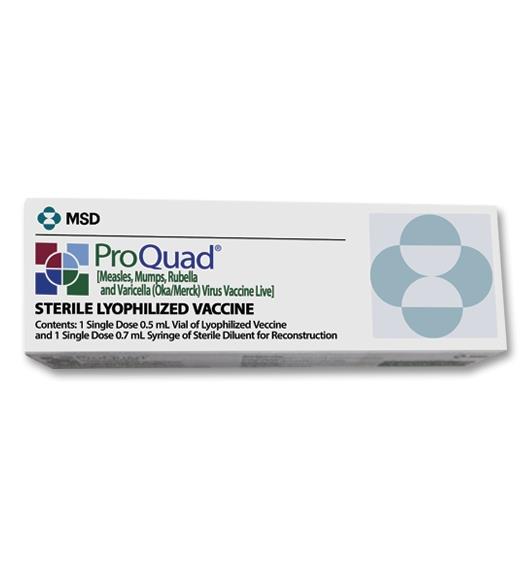 In this observational post-marketing study, no case of febrile seizure was observed during the 5 to 12 day post-vaccination time period among 26,455 children who received ProQuad as a second dose of M-M-R II and/or VARIVAX (25,212 as second dose of M-M-R II and VARIVAX, 1,056 as a second dose of M-M-R II, and 187 as a second dose of VARIVAX). In addition, detailed general safety data were available from the 25,212 children who received ProQuad as a second dose of M-M-R II and VARIVAX, most of them (95%) between 4 and 6 years of age, and an analysis of these data by an independent, external safety monitoring committee did not identify any specific safety concern.
Drug Interactions
At least 1 month should elapse between a dose of M-M-R II and a dose of ProQuad. If for any reason a second dose of varicella-containing vaccine is required, at least 3 months should elapse between administration of the 2 doses.
Administration of immune globulins (IG) concomitantly with ProQuad may interfere with the expected immune response. Vaccination should be deferred for at least 3 months following blood or plasma transfusions, or administration of IG. However, the appropriate suggested interval between transfusion or IG administration and vaccination will vary with the type of transfusion or indication for, and dose of, IG (e.g., 5 months for VZIG).
Following administration of ProQuad, any IG including VZIG should not be given for 1 month thereafter unless its use outweighs the benefits of vaccination.
Vaccine recipients should avoid use of salicylates for 6 weeks after vaccination with ProQuad as Reye syndrome has been reported following the use of salicylates during wild-type varicella infection.
The fourth dose of DTaP (diphtheria, tetanus, acellular pertussis vaccine) is indicated for children 15 months of age and older. Limited data suggest that ProQuad may be administered concomitantly (at separate injection sites) with DTaP in children 15 months of age and older (for children less than 15 months of age see PHARMACOLOGY under Actions).
Results from clinical studies indicate that ProQuad may be administered concomitantly with Haemophilus b conjugate (meningococcal protein conjugate), hepatitis B (recombinant), pneumococcal conjugate, and hepatitis A (inactivated) vaccines.
There are no data for the administration of ProQuad with inactivated poliovirus vaccine.
There are insufficient data to support the use of PROQUAD with any other vaccines.
Storage
During shipment, to ensure that there is no loss of potency, the vaccine must be maintained at a temperature of 2° to 8°C (36° to 46°F) or colder, but not exceed temperatures lower than -50°C ( -58°F). Use of dry ice may subject ProQuad to temperatures colder than -50°C (-58°F).
Before reconstitution, store the lyophilized vaccine in a refrigerator at 2 to 8°C (36 to 46°F) or colder. The vaccine may also be stored in a freezer and subsequently transferred to a refrigerator; however, the lyophilized vaccine should not be refrozen.
DO NOT STORE LYOPHILIZED VACCINE AT ROOM TEMPERATURE.
IF LYOPHILIZED VACCINE IS INADVERTENTLY STORED AT ROOM TEMPERATURE, IT SHOULD BE DISCARDED.
Protect the vaccine from light at all times since such exposure may inactivate the vaccine viruses.
DISCARD IF RECONSTITUTED VACCINE IS NOT USED WITHIN 30 MINUTES.
The diluent should be stored separately at room temperature (20 to 25°C, 68 to 77°F), or in the refrigerator (2 to 8°C, 36 to 46°F).
MIMS Class
Vaccines, Antisera & Immunologicals
ATC Classification
J07BD54 - measles, combinations with mumps, rubella and varicella, live attenuated ; Belongs to the class of measles vaccines.