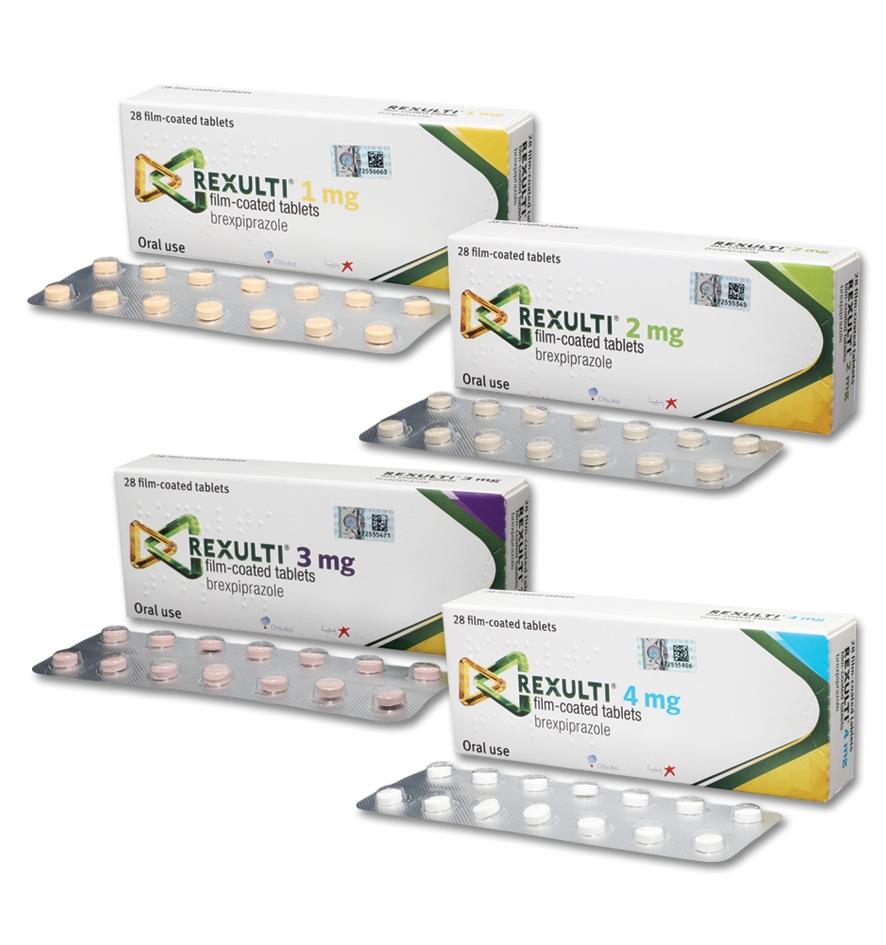 Excipients/Inactive Ingredients: Lactose monohydrate, corn starch, microcrystalline cellulose, hydroxypropyl cellulose, low-substituted hydroxypropyl cellulose, magnesium stearate, hypromellose, talc, titanium dioxide, iron oxide red (3 mg), iron oxide yellow (1 mg, 2 mg), ferrosoferric oxide (2 mg, 3mg).
Action
Pharmacotherapeutic group: Psycholeptics, other antipsychotics. ATC code: N05AX16.
Pharmacodynamics: Brexpiprazole has affinity (expressed as Ki) for multiple monoaminergic receptors including serotonin 5-HT1A (0.12 nM), 5-HT2A (0.47 nM), 5-HT2B (1.9 nM), 5-HT7 (3.7 nM), dopamine D2 (0.30 nM), D3 (1.1 nM), and noradrenergic α1A (3.8 nM), α1B (0.17 nM), α1D (2.6 nM), and α2C (0.59 nM) receptors. Brexpiprazole acts as a partial agonist at the 5-HT1A, D2, and D3 receptors and as an antagonist at 5-HT2A, 5-HT2B, 5-HT7, α1A, α1B, α1D, and α2C receptors. Brexpiprazole also exhibits affinity for histamine H1 receptor (19 nM) and for muscarinic M1 receptor (67% inhibition at 10 μM).
Cardiac Electrophysiology: At a dose 3-times the MRHD for the treatment of schizophrenia and 4-times the MRHD for adjunctive therapy to antidepressants for the treatment of MDD, REXULTI does not prolong the QTc interval to any clinically relevant extent.
Mechanism of Action: The mechanism of action of brexpiprazole in the treatment of major depressive disorder or schizophrenia is unknown. However, the efficacy of brexpiprazole may be mediated through a combination of partial agonist activity at serotonin 5-HT1A and dopamine D2 receptors, and antagonist activity at serotonin 5-HT2A receptors.
Clinical Studies: Adjunctive Treatment of Major Depressive Disorder: The efficacy of brexpiprazole in the adjunctive treatment of major depressive disorder (MDD) was demonstrated in three 6-week, placebo-controlled, fixed-dose trials, and one flexible dose clinical trial with an active reference in adult patients meeting DSM-IV-TR criteria for MDD, with or without symptoms of anxiety, who had an inadequate response to prior antidepressant therapy (1 to 3 courses) in the current episode and who had also demonstrated an inadequate response throughout the 8 weeks of prospective antidepressant treatment (escitalopram, fluoxetine, paroxetine controlled-release, sertraline, duloxetine delayed release, or venlafaxine extended release). Inadequate response during the prospective antidepressant treatment phase was defined as having persistent symptoms without substantial improvement throughout the course of treatment.
The primary endpoint was change from baseline to Week 6 in the Montgomery-Asberg Depression Rating Scale (MADRS), a 10-item clinician-related scale used to assess the degree of depressive symptomatology (apparent sadness, reported sadness, inner tension, reduced sleep, reduced appetite, concentration difficulties, lassitude, inability to feel, pessimistic thoughts and suicidal thoughts). The key secondary endpoint was the Sheehan Disability Scale (SDS), a 3-item self-rated instrument used to assess the impact of depression on three domains of functioning (work/school, social life, and family life) with each item scored from 0 (not at all) to 10 (extreme).
At randomization, the mean MADRS total score was 27. In the three 6-week, placebo-controlled trials, brexpiprazole +ADT 2 mg/day and 3 mg/day demonstrated efficacy over placebo +ADT in reducing mean MADRS total scores. Brexpiprazole +ADT 2 mg/day and 3 mg/day also demonstrated efficacy over placebo +ADT in improving functioning as measured by the SDS mean score. Brexpiprazole 2 to 3 mg/day +ADT also showed statistically significantly greater improvement on the MADRS total score than placebo+ADT in the flexible-dose trial. Results from the primary and key secondary efficacy parameters for both fixed dose and flexible dose trials are shown as follows. In the three, fixed-dose clinical trials, pooled analysis of response rate provided support for the efficacy of brexpiprazole+ADT 2 mg/day and 3 mg/day. The response rate was higher in the brexpiprazole+ADT 2 and 3 mg/day group (28.0%) compared to placebo+ADT (21.1%).
An examination of population subgroups did not reveal evidence of differential response based on age, gender, race or choice of prospective antidepressant. (See Table 2.)

Maintenance: The safety and efficacy of REXULTI as maintenance treatment in adults with schizophrenia aged 18 to 65 years were demonstrated in a 52-week maintenance phase of a randomized withdrawal trial (Study 232). A pre-specified interim analysis demonstrated a statistically significantly longer time to impending relapse in patients randomized to the REXULTI group (1 mg/day to 4 mg/day) compared to placebo-treated patients and the trial was subsequently terminated early because maintenance of efficacy had been demonstrated. The final analysis demonstrated a longer time to impending relapse in patients randomized to the REXULTI group compared to placebo. The key secondary endpoint, the proportion of patients who met the criteria for impending relapse, was lower in REXULTI -treated patients (13.5%) compared with placebo group (38.5%). REXULTI reduced the risk of impending relapse by 71% compared to placebo. REXULTI improved clinical symptomology (as assessed by PANSS, CGI-S and GGI-I [LOCF]) and functioning (as assessed by GAF [LOCF]) during the stabilization phase. These improvements were maintained during the 52-week double-blind maintenance phase in patients on REXULTI whereas patients randomized to placebo showed deterioration in PANSS, CGI-S and GGI-I, and GAF scores [LOCF]). REXULTI maintained symptom control and functioning compared to placebo.
Pharmacokinetics: Absorption: After single dose administration of REXULTI tablets, the peak plasma brexpiprazole concentrations occurred within 4 hours after administration; and the absolute oral bioavailability was 95%. Brexpiprazole steady-state concentrations were attained within 10-12 days of dosing.
REXULTI can be administered with or without food. Administration of a 4 mg REXULTI tablet with a standard high fat meal did not significantly affect the Cmax or AUC of brexpiprazole. After single and multiple once daily dose administration, brexpiprazole exposure (Cmax and AUC) increased in proportion to the dose administered. In vitro studies of brexpiprazole did not indicate that brexpiprazole is a substrate of efflux transporters such as MDRI (P-gp) and BCRP.
Distribution: The volume of distribution of brexpiprazole following intravenous administration is high (1.56±0.42 L/kg), indicating extravascular distribution. Brexpiprazole is highly protein bound in plasma (greater than 99%) to serum albumin and α1-acid glycoprotein, and its protein binding is not affected by renal or hepatic impairment. Based on results of in vitro studies, brexpiprazole protein binding is not affected by warfarin, diazepam, or digitoxin.
Elimination: Metabolism: Based on in vitro metabolism studies of brexpiprazole using recombinant human cytochrome P450 (CYP1A1, 1A2, 2A6, 2B6, 2C8, 2C9, 2C19, 2D6, 2E1, and 3A4), the metabolism of brexpiprazole was shown to be mainly mediated by CYP3A4 and CYP2D6.
In vivo brexpiprazole is metabolized primarily by CYP3A4 and CYP2D6 enzymes. After single- and multiple-dose administrations, brexpiprazole and its major metabolite, DM-3411, were the predominant drug moieties in the systemic circulation. At steady-state, DM-3411 represented 23% to 48% of brexpiprazole exposure (AUC) in plasma. DM-3411 is considered not to contribute to the therapeutic effects of brexpiprazole.
Based on in vitro data, brexpiprazole showed little to no inhibition of CYP450 isozymes.
Excretion: Following a single oral dose of [14C]-labeled brexpiprazole, approximately 25% and 46% of the administered radioactivity was recovered in the urine and feces, respectively. Less than 1% of unchanged brexpiprazole was excreted in the urine and approximately 14% of the oral dose was recovered unchanged in the feces. Apparent oral clearance of a REXULTI oral tablet after once daily administration is 19.8 (±11.4) mL/h/kg. After multiple once daily administration of REXULTI, the terminal elimination half-lives of brexpiprazole and its major metabolite, DM-3411, were 91 hours and 86 hours, respectively.
Studies In Specific Populations: Exposures of brexpiprazole in specific populations are summarized in Figure 1. Population PK analysis indicated exposure of brexpiprazole in patients with moderate renal impairment was higher compared to patients with normal renal function. (See Figure 1.)

Drug Interaction Studies: Effects of other drugs on the exposures of brexpiprazole are summarized in Figure 2. Based on simulation, a 5.1-fold increase in AUC values at steady-state is expected when extensive metabolizers of CYP2D6 are administered with both strong CYP2D6 and CYP3A4 inhibitors. A 4.8-fold increase in mean AUC values at steady-state is expected in poor metabolizers of CYP2D6 administered with strong CYP3A4 inhibitors [see Interactions]. (See Figure 2.)

The effects of REXULTI on the exposures of other drugs are summarized in Figure 3. (See Figure 3.)

Overdosage
No specific information is available on the treatment of overdose with REXULTI. Gastric lavage and treatment with an emetic may be useful immediately after overdose. An electrocardiogram should be obtained in case of overdosage and if QT interval prolongation is present, cardiac monitoring should be instituted. Otherwise, management of overdose should concentrate on supportive therapy, maintaining an adequate airway, oxygenation and ventilation, and management of symptoms. Close medical supervision and monitoring should continue until the patient recovers.
Consult a certified POISON CONTROL CENTER for up to date guidance and advice.
Oral activated charcoal and sorbitol (50 g/240 mL), administered one hour after ingesting oral brexpiprazole, decreased brexpiprazole Cmax and AUC by approximately 5% to 23% and 31% to 39% respectively; however, there is insufficient information available on the therapeutic potential of activated charcoal in treating an overdose with brexpiprazole. Although there is no information on the effect of hemodialysis in treating an overdose with REXULTI, hemodialysis is unlikely to be useful in overdose management since brexpiprazole is highly bound to plasma proteins.
Contraindications
Hypersensitivity to the active substance or to any of the excipients. Reactions have included rash, facial swelling, urticaria, and anaphylaxis.
Special Precautions
Product Specific Warnings and Precautions: Increased Mortality in Elderly Patients with Dementia-related Psychosis: Elderly patients with dementia-related psychosis treated with antipsychotic drugs are at an increased risk of death compared to placebo. Analyses of 17 placebo-controlled trials (modal duration of 10 weeks), in patients taking atypical antipsychotic drugs (including risperidone, aripiprazole, olanzapine, and quetiapine), revealed a risk of death in drug-treated patients of between 1.6 to 1.7 times the risk of death in placebo-treated patients. Over the course of a typical 10-week controlled trial, the rate of death in drug treated patients was about 4.5%, compared to a rate of about 2.6% in the placebo group.
Although the causes of death varied, most of the deaths appeared to be either cardiovascular (e.g., heart failure, sudden death) or infectious (e.g., pneumonia) in nature. Brexpiprazole is not approved for the treatment of dementia-related psychosis.
Cerebrovascular Adverse Reactions Including Stroke in Elderly Patients with Dementia-related Psychosis: In placebo-controlled trials in elderly subjects with dementia, patients randomized to risperidone, aripiprazole, and olanzapine had a higher incidence of stroke and transient ischemic attack, including fatal stroke. REXULTI is not approved for the treatment of patients with dementia-related psychosis.
Suicidal Risk: The possibility of a suicide attempt is inherent in psychotic illnesses and major depressive disorder (MDD). Close supervision and appropriate clinical management of high-risk patients should accompany drug therapy.
Suicidal Thoughts and Behaviours in Children, Adolescents and Young Adults: In pooled analyses of placebo-controlled trials of antidepressant drugs (SSRIs and other antidepressant classes) that included approximately 77,000 adult patients, and over 4,400 paediatric patients, the incidence of suicidal thoughts and behaviours in patients age 24 years and younger was greater in antidepressant-treated patients than in placebo-treated patients. The drug-placebo differences in the number of cases of suicidal thoughts and behaviours per 1000 patients treated are provided in Table 5. No suicides occurred in any of the paediatric studies. There were suicides in the adult studies, but the number was not sufficient to reach any conclusion about antidepressant drug effect on suicide. (See Table 5.)

Drugs Having No Clinically Important Interactions with REXULTI: Based on pharmacokinetic studies, no dosage adjustment of REXULTI is required when administered concomitantly with CYP2B6 inhibitors (e.g., ticlopidine) or gastric pH modifiers (e.g., omeprazole). Additionally, no dosage adjustment for substrates of CYP2D6 (e.g., dextromethorphan), CYP3A4 (e.g., lovastatin), CYP2B6 (e.g., bupropion), BCRP (e.g., rosuvastatin), or P-gp (e.g., fexofenadine) is required when administered concomitantly with REXULTI.
As with other antipsychotics, caution should be used if REXULTI is administered concomitantly with medicinal products known to cause QT prolongation or electrolyte imbalance.
Food: Intake of food has no effect on the pharmacokinetics of REXULTI.
Caution For Usage
Special Instructions for Use, Handling and Disposal: No special requirements.
Incompatibilities: Not applicable.
Storage
Store below 30°C.
Shelf-Life: 3 years.
MIMS Class
Antipsychotics
ATC Classification
N05AX16 - brexpiprazole ; Belongs to the class of other antipsychotics.