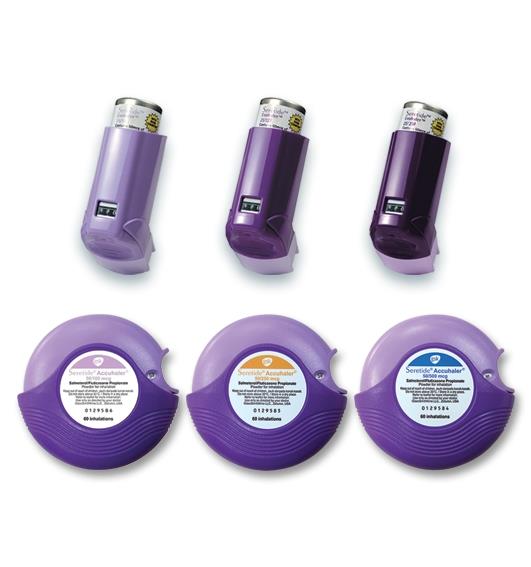 Concise Prescribing Info Full Prescribing Info Contents Description Action Indications/Uses Dosage/Direction for Use Overdosage Contraindications Special Precautions Use In Pregnancy & Lactation Adverse Reactions Drug Interactions Caution For Usage Storage MIMS Class ATC Classification Regulatory Classification Presentation/Packing
Full Prescribing Info
Action
Pharmacology: Pharmacodynamics: Asthma: Salmeterol Multi-center Asthma Research Trial (SMART): The Salmeterol Multi-center Asthma Research Trial (SMART) was a 28-week US study that evaluated the safety of salmeterol compared to placebo added to usual therapy in adult and adolescent subjects. Although there were no significant differences in the primary endpoint of the combined number of respiratory-related deaths and respiratory-related life-threatening experiences, the study showed a significant increase in asthma-related deaths in patients receiving salmeterol (13 deaths out of 13,176 patients treated with salmeterol versus 3 deaths out of 13,179 patients on placebo). The study was not designed to assess the impact of concurrent inhaled corticosteroid use.
Safety and efficacy of salmeterol-FP versus FP alone in asthma: Two multi-centre 26-week studies were conducted to compare the safety and efficacy of salmeterol-FP versus FP alone, one in adult and adolescent subjects (AUSTRI trial), and the other in paediatric subjects 4-11 years of age (VESTRI trial). For both studies, enrolled subjects had moderate to severe persistent asthma with history of asthma-related hospitalisation or asthma exacerbation in the previous year. The primary objective of each study was to determine whether the addition of LABA to ICS therapy (salmeterol- FP) was non-inferior to ICS (FP) alone in terms of the risk of serious asthma related events (asthma-related hospitalisation, endotracheal intubation, and death). A secondary efficacy objective of these studies was to evaluate whether ICS/LABA (salmeterol-FP) was superior to ICS therapy alone (FP) in terms of severe asthma exacerbation (defined as deterioration of asthma requiring the use of systemic corticosteroids for at least 3 days or an in-patient hospitalisation or emergency department visit due to asthma that required systemic corticosteroids).
A total of 11,679 and 6,208 subjects were randomized and received treatment in the AUSTRI and VESTRI trials, respectively. For the primary safety endpoint, noninferiority was achieved for both trials (see Table 1 as follows).

For the secondary efficacy endpoint, reduction in time to first exacerbation for salmeterol-FP relative to FP was seen in both studies, however only AUSTRI met statistical significance: (see Table 2.)