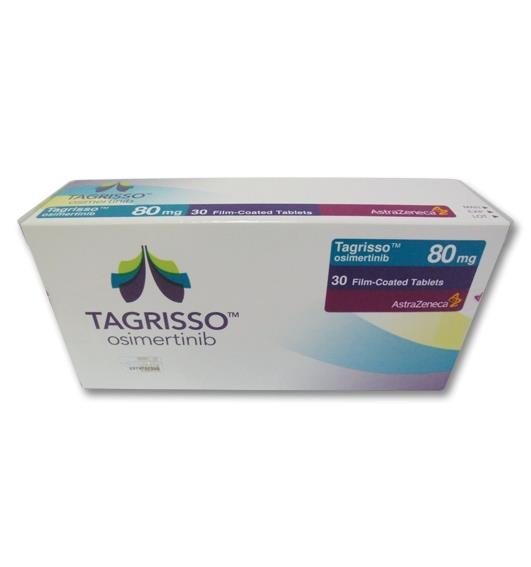 Concise Prescribing Info Full Prescribing Info Contents Description Action Indications/Uses Dosage/Direction for Use Overdosage Contraindications Special Precautions Use In Pregnancy & Lactation Adverse Reactions Drug Interactions Caution For Usage Storage MIMS Class ATC Classification Regulatory Classification Presentation/Packing
The information highlighted (if any) are the most recent updates for this brand.
Full Prescribing Info
Adverse Reactions
Summary of the safety profile: Studies in EGFR mutation positive NSCLC patients: The data described as follows reflect exposure to TAGRISSO in 1142 patients with EGFR mutation positive NSCLC. These patients received TAGRISSO at a dose of 80 mg daily in two randomised Phase 3 studies (FLAURA, first-line; AURA3 second-line only), two single-arm Phase 2 studies (AURAex; AURA2, second-line or greater) and one Phase 1 study (AURA1, first-line or greater) (see Pharmacology: Pharmacodynamics under Actions).
Most adverse reactions were Grade 1 or 2 in severity. The most commonly reported adverse drug reactions (ADRs) were diarrhoea (49%) and rash (47%). Grade 3 and grade 4 adverse reactions with TAGRISSO were 9.7% and 0.9%, respectively. In patients treated with TAGRISSO 80 mg once daily, dose reductions due to adverse reactions occurred in 2.1% of the patients. Discontinuation due to adverse reactions was 4.3%.
Patients with a medical history of ILD, drug-induced ILD, radiation pneumonitis that required steroid treatment, or any evidence of clinically active ILD were excluded from clinical studies. Patients with clinically important abnormalities in rhythm and conduction as measured by resting electrocardiogram (ECG) (e.g. QTc interval greater than 470 ms) were excluded from these studies. Patients were evaluated for LVEF at screening and every 12 weeks thereafter.
Tabulated list of adverse reactions: Adverse reactions have been assigned to the frequency categories in Table 9 where possible based on the incidence of comparable adverse event reports in a pooled dataset from the 1142 EGFR mutation positive patients who received TAGRISSO at a dose of 80 mg daily in the FLAURA, AURA3, AURA-ex, AURA 2 and AURA 1 studies.
Adverse reactions are listed according to system organ class (SOC) in MedDRA. Within each system organ class, the adverse drug reactions are ranked by frequency, with the most frequent reactions first. Within each frequency grouping, adverse drug reactions are presented in order of decreasing seriousness. In addition, the corresponding frequency category for each adverse reaction is based on the CIOMS III convention and is defined as: very common (≥1/10); common (≥1/100 to <1/10); uncommon (≥1/1,000 to <1/100); rare (≥1/10,000 to <1/1,000); very rare (<1/10,000); not known (cannot be estimated from available data). (See Tables 9, 10 and 11.)

Safety findings in the single-arm Phase 2 AURAex and AURA2 studies were generally consistent with those observed in the AURA3 TAGRISSO arm. No additional or unexpected toxicity has been observed and adverse events have been aligned in type, severity and frequency.
Description of selected adverse reactions: Haematological events: Early reductions in the median laboratory counts of leukocytes, lymphocytes, neutrophils and platelets have been observed in patients treated with TAGRISSO, which stabilised over time and then remained above the lower limit of normal. Adverse events of leukopenia, lymphopenia, neutropenia and thrombocytopenia have been reported, most of which were mild or moderate in severity and did not lead to dose interruptions.
Interstitial lung disease (ILD): In the AURA studies, the incidence of ILD was 8.2% in patients of Japanese ethnicity, 1.9% in patients of non-Japanese Asian ethnicity and 2.9% in non-Asian patients. The median time to onset of ILD or ILD-like adverse reactions was 2.8 months (see Precautions).
QTc prolongation: Of the 1142 patients in FALURA and AURA studies treated with TAGRISSO 80 mg, 0.9% of patients (n=10) were found to have a QTc greater than 500 msec, and 3.6% of patients (n=41) had an increase from baseline QTc greater than 60 msec. A pharmacokinetic analysis with TAGRISSO predicted a concentration-dependent increase in QTc interval prolongation. No QTc-related arrhythmias were reported in the FLAURA or AURA studies (see Precautions).
Gastrointestinal effects: In the AURA studies, diarrhoea was reported in 43.5% of patients of which 36.8% were Grade 1 events, 5.5% Grade 2 and 1.0% were Grade 3; no Grade 4 or 5 events were reported. Dose reduction was required in 0.3% of patients and dose interruption in 0.7%. One event (0.1%) led to discontinuation. In AURA3 the median time to onset was 22 days and the median duration of the Grade 2 events was 5.5 days.
Special populations: Elderly: In FLAURA and AURA (N=1142), 43% of patients were 65 years of age and older, and 13% were 75 years of age and older. Compared with younger subjects (<65), more subjects ≥65 years old had reported adverse reactions that led to study drug dose modifications (interruptions or reductions) (13.4% versus 7.6%). The types of adverse events reported were similar regardless of age. Older patients reported more Grade 3 or higher adverse reactions compared to younger patients (13.4% versus 9.3%). No overall differences in efficacy were observed between these subjects and younger subjects. A consistent pattern in safety and efficacy results was observed in the analysis of AURA Phase 2 studies.
View ADR Monitoring Form