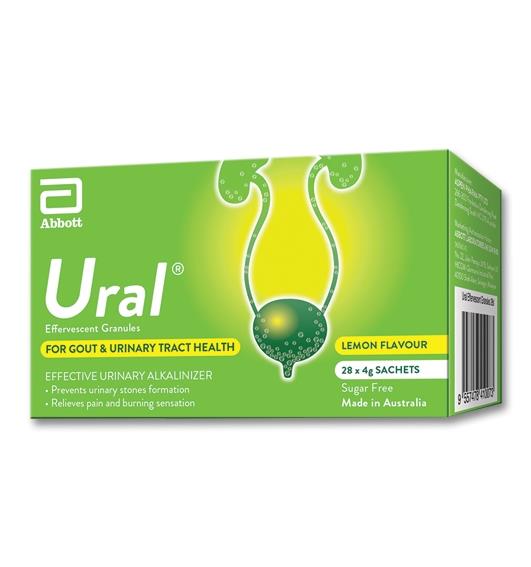 Concise Prescribing Info Full Prescribing Info Contents Description Action Indications/Uses Dosage/Direction for Use Overdosage Contraindications Special Precautions Use In Pregnancy & Lactation Side Effects Drug Interactions Storage MIMS Class ATC Classification Regulatory Classification Presentation/Packing
Full Prescribing Info
Contents
Sodium bicarbonate, anhydrous citric acid, anhydrous sodium citrate, tartaric acid.
Description
Each 4g sachet contains sodium bicarbonate 1.76 g, citric acid, anhydrous 0.72 g, sodium citrate, anhydrous 0.63 g and tartaric acid 0.89 g.
Also contains Nature Identical Lemon Flavour oil, Terpeneless and saccharin sodium.
Ural is a pleasantly flavoured urinary alkalinizer.
Each sachet contains 4g of white effervescent granules powder to be dissolved in cold water to give clear colourless liquid.
Action
Pharmacology: Sodium bicarbonate acts as urinary alkaliser by increasing the excretion of free bicarbonate ions in the urine, thus effectively raising the urinary pH. By maintaining an alkaline urine, the actual dissolution of uric acid stones may be accomplished. It also acts as an antacid by chemically neutralizing or buffering existing quantities of stomach acid but has no direct effect in its output. This action results in increased pH value of stomach contents, thus providing relief of hyperacidity symptoms.
Sodium Citrate and Citric Acid: Sodium citrate is metabolized to bicarbonates which increases urinary pH by increasing the excretion of free bicarbonate ions without producing systemic alkalosis when administered in recommended doses. A rise in urinary pH increases the solubility of cystine in the urine and the ionization of uric acid to more soluble urate ion. By maintaining an alkaline urine, the actual dissolution of uric acid stones may be accomplished. It also reacts chemically to neutralize or buffer existing quantities of gastric hydrochloric acid but has no direct effects in its output. Sodium bicarbonate is excreted through renal and also via lungs by forming CO2. Sodium citrate, citric acid and absorbed tartaric acid are excreted through the urine.
Indications/Uses
Indicated for relieving of discomfort in mild UTI; symptomatic relief of dysuria; to enhance the action of certain antibiotics, especially some sulphonamides; in gout as urinary alkalinisers to prevent crystallisation or urates and dissolution of uric acid stones.
Dosage/Direction for Use
4g to 8g (1 to 2 sachets) dissolved in cold water four times daily or as prescribed.
Overdosage
Overdosage may result in metabolic alkalosis. Ural should be discontinued, appropriate treatment instituted and electrolyte and acid-base determinations should be carried out as appropriate.
Contraindications
Renal failure or hypernatremia; in conjuction with hexamine mandelate or hexamine hippurate therapy because an acidic urine is needed. Caution is advised in overt and occult cardiac failure. Concomitant use of urinary alkalinisers and quinolone antibiotics should be avoided; crystalluria may be more likely to occur in alkaline urine.
Special Precautions
This preparation contains 644mg of sodium per sachet which should be taken into account by those on a low sodium diet.
Use In Pregnancy & Lactation
Pregnancy: Studies regarding the effect of citrates on pregnancy have not been done.
Nursing Mothers: Caution should be exercised when administered to a nursing mother.
Side Effects
The tartrate component of Ural may be incompletely absorbed. Because of this, Ural may exert a mild laxative effect. Prolonged and excessive use may cause systemic alkalosis and/or hypernatremia.
Drug Interactions
Alkalinization of the urine due to the use of Ural, theoretically, may result in a decreased therapeutic effect of the following medications: chlorpropamide, lithium, salicylates and tetracyclines. Alternatively, alkalinization of the urine due to the use of Ural, theoretically, may result in an increased therapeutic effect of the following medications: amphetamines and ephedrine/pseudoephedrine.
Antacid: Concurrent use of antacids with sodium citrate and sodium bicarbonate may promote the development of calcium stones in patients with uric acid stones and may also cause hypernatremia.
Concurrent use of aluminium-containing antacids with salts can increase aluminium absorption, possibly resulting in acute aluminium toxicity, especially in patients with renal insufficiency.
Quinolones: Citrates may reduce the solubility of ciprofloxacin, norfloxacin or ofloxacin in the urine. Patients should be observed for signs of crystalluria and nephrotoxicity.
Laxatives: Concurrent administration of citrates with laxatives may have an additive effect.
Storage
Store at temperature below 30°C.
Shelf-Life: 36 months.
MIMS Class
Other Drugs Acting on the Genito-Urinary System
ATC Classification
G04BX - Other urologicals ; Used in the treatment of urological problems.